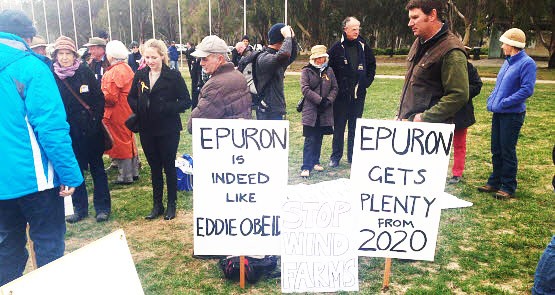 Bronzed squattocrats from around the country descended on Parliament House’s Federation Mall this morning to send a chilly anti-wind farm blast in the direction of inner-city Greens and Leftists intent on building monstrosities on their rural idylls.

When Crikey arrived just after 10am, the crowd of about 200 stalwarts (police estimated 700) were clutching Thermoses in the lilting Canberra fog, eagerly awaiting their master of ceremonies Alan Jones and promised speeches from the likes of anti-abortion DLP Senator John Madigan, Liberal global cooling MP Craig Kelly and the retiring Ron Boswell.

But by 10.45 there was still no action, just some semi-interested journalists stalking around for quotes and tinny renditions of Eva Cassidy’s People Get Ready and Bob Dylan’s The Times They Are a Changin’ leaking out of the PA.

As the cream of the country murmured respectfully, proudly displaying name tags of their properties — there was Helen from Collector, Charles from Crookwell — numerous representatives of “wind farms cause everything” lobbyists Waubra Foundation arced up about the health impact of turbines. One gentleman in an oversized “wind power fraud” T-shirt eagerly talked up Tony Abbott’s chief business adviser Maurice Newman’s participation (“he owns a farm … he used to chair the ABC!”).

Gus Gardner from the Western Victoria outpost of Macarthur had driven 14 hours to Capital Hill and seemed like a good bloke. He told Crikey that 120 turbines co-owned by AGL and Meridian (in turn owned by the New Zealand government) had recently “shut down” his ultrafine shedded sheep business. And his pee frequency and sleep patterns had taken a turn.

He says the turbines cause “irregular urinary habits”. But the real problem is falling property prices.

“Our property is now worthless, if we went to sell it no one would buy it. There is evidence out there, but the media are not playing along with it. The public will never understand because the media will not tell them. The only way it will get out there is if someone dies and pays the ultimate price,” he said.

“I mean, the whole thing’s a scam anyway. The gas-fired turbines [installed as back-up] make as much electricity over two weeks over the summer than the wind farm would make in a year. It’s not about cleanliness, the whole thing is about money.”

Just after 11am, a restrained Jones finally took the podium and cast a wary eye over the mostly mild banners (“stop the spin”; “Epuron is indeed like Eddie Obeid”) that conspicuously failed to mention the PM. But there was some savvy wordplay on the refugee issue — “Stop the wind turbines, we’re the real refugees” screamed one placard, with the silhouette of an Indonesian vessel crossed out. Somewhat counter-intuitively, the Parrot urged turbines to be erected on Parramatta Road “where people use power”, presumably spreading the pee flow problems across large swathes of Sydney’s south-west.

Shane Mortimer, a Ngambri elder, also complained about his urine while Liberal Senator Chris “baby’s got” Back was introduced by Jones as the “only veterinarian in Parliament”.

Meanwhile, Senator Nick Xenophon, who last year co-sponsored the defeated Renewable Energy (Electricity) Amendment (Excessive Noise from Wind Farms) Bill 2012, mysteriously pulled out, perhaps concerned about the optics of appearing on the same stage as the fringe dwellers of the 43rd Parliament (he also pulled out of a rival GetUp! shindig on climate change).

No word on how his number ones are holding up.

Look Andrew, I know the anti-wind mob are a soft (and somewhat amusing) target, but it might have been worthwhile also mentioning, there was a much larger crowd at the alternative rally4renuables.

There is nothing “good bloke” about shedded ultrafine wool. I am heartened to hear that installing wind turbines next to these facilities forces their closure.

I wonder if the wee folk had a little chat with don quixote jones & the vagaries of the prostate gland. The old bloke with the low frequency frequency may be right, because a dodgy prostate can play havoc with your wind, but it may also account for his urinary problems.

There is absolutely no chance “turbines will be erected on Parramatta Road.” It runs through the Greens state electorate of Balmain, and the (nearly) Greens federal one of Grayndler.

Balmain’s Greens MP has successfully fought ALL property value affecting developments in the area, including low cost student housing and an underground Metro.

I want a “wind farms cause everything” T-shirt.