Feeling around in the dark, Walsh finds more shocking art

Hobart's Dark Mofo arts festival, which runs till the Winter Solstice (June 23), is a celebration of the dark through large-scale public art, food and music, as well as "light and noise". 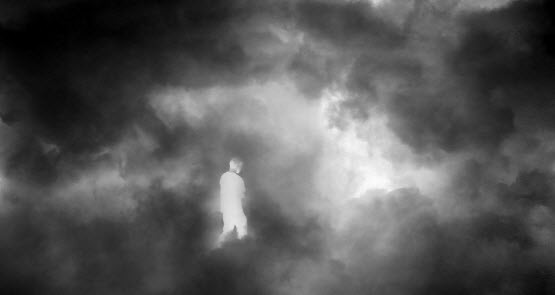 It’s not often you have to sign a legal waiver before entering an art installation. But visitors to Dark Mofo’s ZEE, by Kurt Hentschlager, have to attest that don’t have epilepsy or a range of other health issues.

Once inside, you can see why. ZEE (pictured above) consists of a room filled with fog with strobe and pulse lighting, accompanied by a low-frequency sound scape. The artist says the installation registers in the viewer’s cerebral cortex, “the mind’s eye”. For 13 minutes visitors are subjected to the same changes in light frequency and sound, but each individual’s experience is different.

Before entering, we are told there is a rope around the edge of the room, and that anyone feeling uneasy or unwell should hang on to the rope. Evidently someone had a seizure in there on opening night, and I probably lasted about two minutes before running my hand along the rope to find the door and letting myself out.

Not everyone suffers. Some people love it — there is comfort in knowing what is real and where things are, and to have that comfort stripped away can induce a kind of euphoria, as well as terror.

ZEE was one of the exhibits in the group show entitled “Beam in Thine Own Eye”, part of Hobart’s Dark Mofo arts festival. The festival, which runs till the Winter Solstice (June 23), is a celebration of the dark through large-scale public art, food and music, as well as “light and noise”.

It’s the brainchild of Hobart’s most famous citizen, David Walsh, who has made hundreds of millions of dollars through gambling and channelled a large chunk of that into his world-famous Museum of Old and New Art. According to figures from the Tourism Industry Council of Tasmania, MONA is now the most visited attraction in Tasmania, with 450,000 people going through its doors last year.

Mofo creative director Leigh Carmichael says the festival will “delve into the centuries-old rituals and mythologies that have been arising in response to the winter solstice since Neolithic times”. Many of these “include deities of life-death-rebirth (representing both loss and hope) and metaphors for the return of light from darkness”.

One of the most spectacular exhibits is Ryoji Ikeda’s light sculpture, spectra (pictured below). At nightfall, 49 giant searchlights are turned on to form a tower of pure white light, which reaches 15km into the sky. At the base, sine waves form invisible sonic patterns which alter as you move around them. Other activities include a film festival of Danish crime cinema (think early Quentin Tarantino crossed with The Killing) and a theatrical performance exploring Tasmania’s convict heritage called New Songs from the Prisons Without Walls, featuring Tim Rogers from You Am I. Most of the events are free, due to the generous patronage of Walsh and the Tasmanian government, which is subsidising the event for the next three years to the tune of $1 million annually.

One of the best parts of visiting Hobart, of course, is the excellent food and wine. Following our experience at ZEE, we reeled into the Nant whisky bar at Salamanca Place, and calmed our shattered nerves with a dram of Tasmanian-brewed single malt. There, we discussed one of the festival’s highlights, the nude swim on the Derwent River — on the Winter Solstice. Who would be mad enough to take off their clothes in Tasmania in the dead of winter? That, we decided as we perused the drinks menu, was an event for true art-lovers.

Crikey has obtained a list of the 145 arts organisations that will be affected by George Brandis' funding cuts. Whole sectors are in trouble, with possibly billions of dollars and hundreds of jobs at stake.

And the centre of arts innovation is … Perth

Western Australia’s cultural scene is flourishing. As Perth booms with mining wealth, its international festivals are expanding and the local scene is a melting pot of renewed creativity.

With the Big Day Out on the hunt for a new site, the economic impact of big festivals has never been more important. But are tourist dollars really the best way to measure the impact of cultural events?

Great tips Margot, thanks. I’m heading down to the festival on Friday, the date I understood to be the winter solstice (21st). You have it as the 23rd?

The exact date of the solstice is much disputed! But the swim is being held on the morning of the 22nd. The whole program is on the Dark Mofo website, and there’s a good phone app.

The spectra is indeed an amazing sight. The picture above doesn’t do it justice but I and seemingly half of Hobart were wandering around it on a wet & windy Sat night going ooh and aah. Some have suggested it be retained in-situ for an extended period but i don’t know if the State could afford the power bill. Hope also to check out the Red Queen exhibition at MONA before it ends. David Walsh for Premier!