Richard Farmer gives the ABC a fail for its Sunday news sense. Plus other political views noted along the way.

An improvement with a but. The probability of a Labor election win as measured by the Crikey Election Indicator improved a little over the last week but there is one important qualification. The reason for the change from 10.6% to 12.8% is the parallel decline to 46% in the likelihood of Julia Gillard being the party leader come election day. 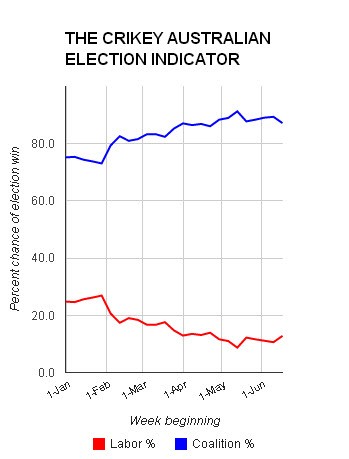 Respect for the office. It is a strange and rare event in Australia for the actions of a Prime Minister in a past, pre-parliamentary, life to be caught up in a police fraud squad investigation even if that involvement is purely peripheral. Yet that is the position of Julia Gillard on the eve of an election campaign. The Australian reported this morning:

POLICE from the Victorian Fraud Squad have seized boxes of legal documents from Julia Gillard’s former employer, Slater & Gordon lawyers, as part of an ongoing probe into the AWU slush fund scandal.

The documents were removed from the firm’s Melbourne offices after the execution of a search warrant and co-operation between the firm and detectives, sources told The Australian yesterday.

ABC and a strange news sense. Apparently the ABC website yesterday morning posted and then removed a video of a segment showing Sydney Daily Telegraph columnist Piers Akerman having a few words about the Howard Sattler comments on our Prime Minister’s private life. Well if the ABC did do that, as numerous Twitter contributors I follow assert, at least the silly decision was rectified. Along with the rest of the Insiders the s-xism discussion was available in full on IView when I looked last night. The segment, however, is not currently available on the Insiders website as it usually would be.

One thing that did surprise me was that the Twitter led controversy about what Piers Akerman said on the program (there’s a transcript here) did not make news coverage on the ABC website. That was in marked contrast to the way that the Howard Sattler questioning of the PM was treated by the national broadcaster earlier in the week.

Holier than thou? Really? The stablemates fell out a little yesterday. News Limited’s Malcolm Farr made his differences of opinion with columnist Piers Akerman quite apparent with his words and his facial expressions. And a little history. Never heard of those rumours, Malcolm? A quote for the day

“There’s always been a willingness to be overly impressed by people who appear to be extraordinarily financially successful.” Media briefs: TV while blind … cadetships at Seven … Rundle on the establishment …

“Bad publicity for Labor”? The Oz – like four-legged dogs with a bone?