An ex-ambassador looks at ‘turning back the boats’

Tony Abbott's policy of turning back asylum seeker boats "when it is safe to do so" will endanger lives and crush navy morale, writes former Australian ambassador to Poland and Cambodia Tony Kevin. 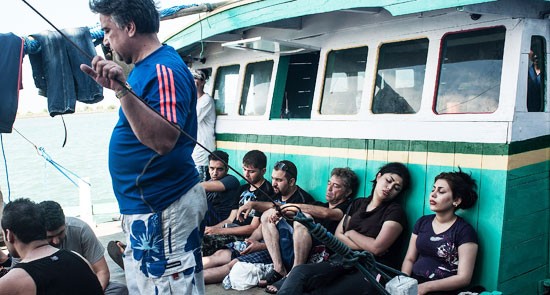 Opposition Leader Tony Abbott’s pledge to turn back asylum seeker boats to Indonesia is unworkable and dangerous, as Coalition frontbencher Malcolm Turnbull has pointed out. The issue is worth a closer look.

For several months (September-December) in 2001, former PM John Howard ordered the navy to conduct tough turnback policies. Eventually his government did stop the boats — but not by turning or towing boats back to Indonesia. It stopped them by acquiescing or turning a blind eye to successful voyage deterrence through ruthless covert disruption practices.

As a result, I believe hundreds of people died at sea when Suspected Illegal Entry Vessel X (or SIEV X), an Indonesian fishing boat carrying over 400 asylum seekers, sank in October 2001. I hope Abbott’s conscience would never allow him to go so far. The indifferent record in 2001 is salutary, and it would be even harder for the navy to turn back or tow back boats now for a number of reasons:

“Abbott now hoses down immediate expectations from his ‘stop the boats’ mantra of the past four years. His language is different. Asked how long it will take him to stop the boats, Abbott said: ‘We will make a difference from day one’ …. Pressed further, Abbott said the boats would be stopped in his first term …

“[Turning back the boats] requires not the consent of Indonesia but its acquiescence … It will mean repairing any damaged boat, transferring the asylum-seekers to navy ships for some time and ensuring the boat is transported back near to Indonesian waters.”

But none of this is credible or workable, either on the water or by any “quiet diplomacy” between Canberra and Jakarta. In mid-2014 Indonesians will elect a new president, who is unlikely to be nearly as sympathetic to Australia as Susilo Bambang Yudhoyono. As recent remarks by Indonesian officials suggest, national pride on this issue is rising. To try to force Indonesia’s hand after September 2013 by leaving drifting disabled boats within its 12-mile territorial waters limit would evoke angry or indifferent responses: “You brought them here, they are your problem, not ours.”

If the boats start to sink on the edge of Indonesian territorial waters (and they will), the Royal Australian Navy would have to rescue them. This problem is worsened by seasonal offshore surface currents, caused by coastal upwelling off the south coast of Java, which can push drifting boats left at the 12-mile territorial sea limit back out into international waters — putting the rescue-at-sea onus back on the Australian navy ships that towed them there.

If the Australian and Indonesian governments insisted on playing such dangerous brinkmanship games with powerless people’s lives, there would be grave outcomes of fatal incidents at sea. The consequences — for Australia’s international standing, for navy morale, and even for Australian-Indonesian relations — would be difficult to predict but almost certainly highly negative.  Surely, it is time now for Tony Abbott to cross navy towback off his list of asylum seeker deterrence policies.

*Tony Kevin is a former Australian ambassador to Poland 1991-94 and to Cambodia 1994-97, and is author of  A Certain Maritime Incident: the sinking of SIEV X (2004) and Reluctant Rescuers.

1. Boat people are not powerless.
2. There are already fatalities at sea.
3. Indonesia seems to be able to stop the boats.
4. This is yet another high-minded left-elite opinion piece with no solution proposed.

Labor has failed and failed utterly in this policy area. They removed the successful measures amidst a completely self indulgent group wank and now have no answers at all. There are policy options available. How about something constructive rather than yet another partisan political criticism of the only party willing to tackle this diabolical problem in conformance with the wishes of the majority of Australians?

Why oh why doesn’t this get dissected as forensically as this in MSM and shoved up Abbott and teams nose until they cry Uncle?

Dear Mr. Hand – one might suggest you apply your own argument to yourself ie how about something constructive.

David it is not a policy area. The only area that is policy based is what we do to people when they are here and with thousands of innocent people jailed without cause, with people killing themselves and so on the notion that they give a damn about refugees drowning is absurd.

It might really shock you David but we don’t own the oceans and borders of the world.

WE have zero right to tell anyone they cannot sail but we have a 100% responsibility to save them if they are in trouble and not send them into further danger.

Tell us David, if fire brigades are trying to get to bushfires do you turn them back if they don’t have the right frigging papers? Because that is the concept you peddle.

Now as we have no legal right in the world to stop any innocent passage of any vessel why do you think we can force them to sail from 12 nm from our coast back to Indonesia where they are not wanted, are not INdonesian, cannot be protected and will face brute force deportation.

The brutality of Australia under Gillard is the worst it has ever been because she has buckets of concrete poured into her racist ears and refuses to understand the law.

But then she has always refused to understand the law David, just like you.

Because you see the law that everyone has the right to seek asylum is CONCRETE AND 1000% NOT NEGOTIABLE.