Rupert Murdoch's in town -- so senior News Limited staffers need to watch out. It's been a grim week for newspapers, with three News editors shown the door, and two editorial heavyweights gone from Fairfax. 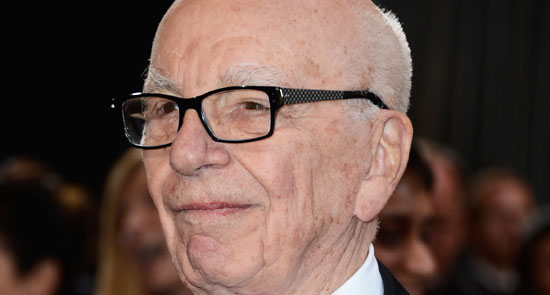 Even by the harrowing standards of recent years, it’s been an especially brutal week for Australian newspapers and the people who work for them. Bodies are being thrown overboard everywhere you look — with the seniority, and longevity, of those who are leaving especially stunning.

News Limited editors have long been petrified when Rupert Murdoch comes to town — and not just because of his notoriously harsh appraisals of their front page story selections. The press releases announcing the “resignations” of those who have fallen out from favour traditionally start appearing as soon as Murdoch’s plane home leaves the tarmac. The mogul’s last visit, in April, came and went with no major moves. He’s been accompanied on his latest visit by incoming News Corp CEO Robert Thomson, surveying the scene before News splits into separate entertainment and publishing companies later this month. It’s now clear the silence in April merely represented a stay of execution, rather than a pardon, for those whose time was up.

News Ltd announced yesterday afternoon that Phil Gardner, editor-in-chief of Melbourne’s Herald Sun, would leave the company on Monday. It’s no surprise that Gardner’s leaving the Hun. “Phil Gardner was a dead man walking ever since the restructure of operations was announced last year,” one News insider said. The Hun was seen as unusually top heavy with Gardner as editor-in-chief, Damon Johnston as editor and Peter Blunden still exercising control as Victorian editorial director.

But the fact Gardner has departed News altogether has come as a shock to his staffers. The South African-born veteran had long been rumoured to be taking up a new post that would see him integrate News Limited and Fox Sports content. But Crikey hears this has been fiercely resisted from editors who hate the idea of “remote control” of their sports sections.

“I’m shocked – I had him picked as a company man through and through,” one Herald Sun reporter told Crikey. This source reckons the failure of the Hun‘s freemium paywall experiment wouldn’t have helped Gardner — even if he was handed a “shit sandwhich” from his bosses.

Gardner was a well-liked figure inside News, although one staffer describes him as a “bit of an enigma” and “not a people person”. Outsiders praise him as a moderate, generous with his time, and not a News bully boy.

A News Limited spokesman refused to say whether Gardner would be replaced as editor-in-chief.

The changes in Brisbane’s News Limited corral, announced earlier this week, were even more dramatic: Queensland editorial director David Fagan, a towering figure in Sunshine State journalism for decades, is gone. So is Courier-Mail editor Michael Crutcher, who is reported today to have hired a top lawyer. Crutcher famously pulled his reporters off the campaign bus during the 2012 Queensland election — a stunt to be sure, but journos around the country cheered him for calling bullshit on the contrived nature of modern political campaigning.

Crikey hears that Murdoch has been unhappy with The Courier-Mail‘s often critical coverage of Premier Campbell Newman — particularly his public service job cuts. It’ll be fascinating to see if the tone of the coverage changes under new editor Chris Dore, who’s departing as head of the News Limited Sunday Times in Perth.

Interestingly, The Australian reported the Queensland overhaul yesterday under the headline: “Editorial changes strengthen teams nationwide.” Fagan and The Oz’s editor-in-chief Chris Mitchell have long been on unfriendly terms. Mitchell launched a poaching raid on the paper when he took over at the broadsheet, which sells better in Queensland than most other states.

And it’s not just News Limited where the axe has fallen this week. Staffers at Fairfax were shocked yesterday by the sudden departure of editorial heavyweights Lisa Hudson and Lauren Quaintance. Hudson, the former CEO of Fairfax Magazines, was the general manager of food and wine; Quaintance was the general manager of travel. Sydney Morning Herald sources say Hudson appeared devastated as she departed Fairfax’s pyrmont HQ yesterday afternoon.

Both Hudson and Quaintance had been appointed to their posts in late 2011 by Metro Media boss Garry Linnell with a mission to eliminate costs and drive copy-sharing between The SMH and The Age. This has caused special alarm at The Age, with staffers fretting about the “Sydney-ficiation” of Melbourne icons such as foodie insert Epicure. Now Hudson and Quaintance are the victims of cost-cutting: there’s no room for them in the slimmed-down Life Media division headed by Melina Cruickshank.

These announcements, of course, followed the news on Tuesday that Kerry Stokes’ West Australian Newspapers would slash 100 jobs — with 40 editorial staffers to go. You know it’s been a grim week when reporters are being laid off in an economically booming, one-newspaper town like Perth.

Newspaper heavyweights hope income from paywalls will eventually help plug the gaps left by disappearing circulation and display advertising revenues. But, until that day, more reporters, editors and managers can be expected to walk the plank.

Heard today some could be salacious news for the; but you won’t find in murdoxcracy press is his separating form wendi M and why so.

Ah yes, he’s all powerful, feared by many. But is he happy?

What does the silly old tyrannical despot want – the Curry or Maul to go easier on Manuel?
The only reason they do pick on him now with their flaccid lettuce leaf flagellation (compared to Bligh/Rudd/Gillard/Greens) is because :-
a) he’s got such a majority,
b) they want “Moggill for Manuel” (get rid of Flegg from his safe seat) and
c) they can run around masquerading as if giving a rat’s about PCP’s, laudable but empty “mission statements” about commitment (they probably shopped somewhere else) and accountable government. If Manuel didn’t have that majority Limited News would performing as PR management business as usual.
He doesn’t even run his own company along the “democratic” lines he reckons the country should be – but both, to suit him and his!
Where’s Bob Carr – the government can stop undesirables, like certain rapper’s, entry to the country – why can’t they stop entry to undesirable trouble-making old crappers?

For what it’s worth, I reckon Murdoch has been a parasitic cancer on not just our democratic process but that of the US and UK.
The comparatively little good he and his minions can point to they’re having achieved has been scraped away and undone to a gangrenous sub-text, by their hypocrisy, unbalanced self-service attitude and bullying of politicians through their PR empire, to get their own unelected way and say in governance to suit their/his own ends. He wants to run the country like he does his company – a controlling say from a minimal holding, whilst spouting “Viva Democracy”?
Gillard is wearing the opprobrium that seems little more than the Right’s “get square” for the comparatively muted criticisms (considering their lack of resources compared to the conservative media choir, led by Limited News, ability to shout down their opposition) from the Left during Howard’s abuse of office, while Limited News played Chief Assuager, Pardoner and Apologist – virtually ignoring his transgressions compared to how “awake” they are to Gillard’s, and Rudd’s before her? Lying low and touting Rudd in the face of his tsunami – lest they lose face as being “politically astute” – only for as long as they couldn’t wait for him to screw up on anything and swarm in like jackals and blow-flies? Compared to how they indulged Howard.
They couldn’t stand Howard being sniped at by the Left for such things as the embarrassment from non-core promises; “ministerial accountability”; wearing a bullet-proof vest to address a crowd of Australians (blaming advisors for making him wear it); “Halverson (sacked as Speaker for being too fair to Labor)”; the waterfront dispute/behind closed door deals with Corrigan; the wording for republic referendum; the GST (that stood to lose the next election but then he had 9/11 to play with); “Children Overboard”/Tampa; Iraq; Habib/Haneef/Hicks; AWB; Brough’s “Little-Children-Are Sacred-free-zone Intervention” and “Workchoices”, how he brought on disrespect for the office?
Now the msm wonders why this lack of respect for the office of PM? Apparently it can’t see the reaping of what Howard and that all-in-one “plough/sod-seeding/scarifier” of information Murdoch sowed?
But what would I know?

But why isn’t rupert posting the news on twitter?
He’s gone all shy all of a sudden.

No words of wisdom.