Guy Rundle's obituary to Christopher Pearson pulls no punches, while Bernard Keane takes on Australia's feeble response to US mass surveillance. More newspaper editors have been sacked this week, and with Rupert Murdoch divorcing (again), we outline some handy business lessons from the Sun King. And Dog take on stupid radio hosts ...

“On all operations, female soldiers and officers have proven themselves worthy of the best traditions of the Australian Army. They are vital to us maintaining our capability now and into the future. If that does not suit you, then get out.”

During a week in which we’ve been left wondering just how deep s-xism really does run in Australian public life, army chief David Morrison’s video message to his troops was like a gust of fresh air. He’s responding to the latest scandal — explicit emails circulated around Defence denigrating women.

As Morrison correctly noted elsewhere, for too long the Australian Defence Force treated exploitative behaviour, bullying, harassment and s-xism as a problem of individuals rather than a systemic one. That has changed, and Morrison’s behaviour this week demonstrates that the army understands both why it is critical that it create a respectful environment for all its soldiers, and why there must be cultural change to foster that environment.

And as part of that, Morrison clearly understands that that must include booting out those who refuse to change.

It’s an example of real leadership that many others in public life should consider following. 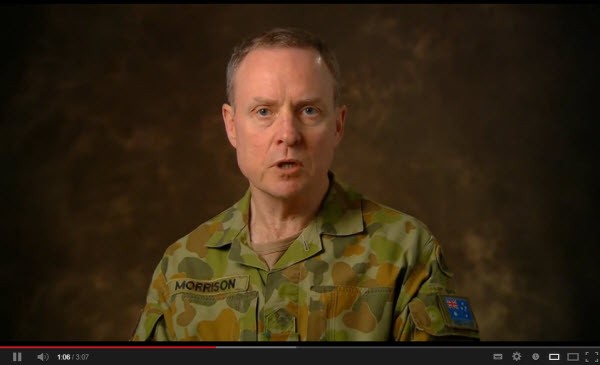 * Our regular podcast Crikey calling has all the gossip from Parliament House you could possibly need. Tune in to our latest edition to hear Canberra correspondent Bernard Keane talk to deputy editor Cathy Alexander about whether Julia Gillard will still be PM in two weeks’ time. Plus Keane asks: what is really wrong with the ALP?

Impressive words. Actions are even better.

If he can deliver a change of culture, as well as he delivers a speech, then he really will be a hero.
Time will tell.

On 2GB, hate radio central, the noon shoutjock claimed that it was a fix to distract undue (?!)attention from the PM’s blue tie speech.
Sooo, not only bilious but befuddled.

For too long it’s been virtually defended/dismissed in our ADF as “toughening up”?
While it attracts too many of the wrong people.