Charles Lewis, the US-based "godfather of non-profit investigative journalism", speaks to Matthew Knott about the growing importance of philanthropically funded reporting. And Lewis has some tips on making it work ... 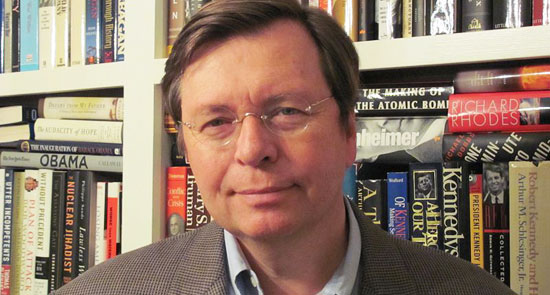 It was 1988, the curtains were closing on the Reagan era, and US 60 Minutes producer Charles Lewis had a sizzling scoop in his hands. White House trade officials — almost 50% of them over the past 15 years, Lewis eventually revealed — had become paid lobbyists for other countries or overseas corporations after leaving government. A cracking yarn, but a tricky one. Especially given his boss was a close friend of a player in the story, a billionaire businessman using his credentials as a former US cabinet secretary to open doors around the world. So close, the boss and the billionaire used to fly together to the Hamptons in the latter’s private helicopter to avoid the traffic. That relationship, Lewis is convinced, played a part in why his story struggled to make it to air.

“My story was being blocked for all the wrong reasons — not journalism reasons,” Lewis told Crikey. “I became very angry about it.” He was also increasingly frustrated with the lack of resources being given to serious, investigative journalism in commercial television.

And so — with a mortgage, a young daughter, no savings and no idea what to do next — he quit. “It was the most impulsive thing I ever did,” said Lewis, a quiet, mild-mannered guy if ever there were one. “On the face of it, it looks like complete insanity, and a lot of people thought I had gone insane. Mike Wallace, the famous 60 Minutes correspondent, even rung up my wife and asked her if I was having a breakdown.”

What Lewis did next seemed even crazier: he turned down lucrative job offers, including from his former employer ABC, to set up a non-profit investigative journalism organisation with two reporter buddies. Like most journalists, he’d never raised money, never managed money and never managed people.

The Center for Public Integrity, as he named it, wasn’t the first outfit of this kind, but it was unique. Based in Washington DC, Lewis and his colleagues set out to undertake the gruelling months-long (sometimes years-long) investigations into abuses of power the commercial media was increasingly shirking. The centre started with a bang: its first report, a fleshed-out examination of Lewis’ last 60 Minutes story, helped pressure President Bill Clinton to place a lifetime ban on foreign lobbying by US trade officials. Eventually growing to over 50 staff members, the centre has gone on to win a swag of awards, raise over $30 million in funds and publish a New York Times best-seller.

But Lewis didn’t stop there, later founding corruption watchdog Global Integrity, the Consortium of Investigative Journalists (now led by ex-Fairfax journo Gerard Ryle) and the Investigative Reporting Workshop at American University. That’s why Lewis, who will travel to Australia in August to speak at the Walkley Foundation’s Storyology conference, is known as the “godfather of non-profit investigative journalism”. No one else has spent as much time thinking about how philanthropically funded reporting can help plug the gaps left by increasingly cash-strapped, time-poor mainstream media outlets.

The US philanthropic journalism “ecosystem”, as Lewis calls it, is expanding rapidly — both in size and in credibility. A recent Pew Research Center study found 172 non-profit news outlets had launched in the US since 1987. This year, InsideClimate News, a tiny non-profit with seven staff, won a prestigious Pulitzer; three years earlier Pro Publica, also funded philanthropically, did the same.

In Australia, the sector is still nascent, with The Conversation (publishing analysis by academics and mostly funded by the university sector) and The Global Mail (funded by Wotif founder Graeme Wood) standing out as the biggest operators. There are many reasons for that: Australia has well-funded public broadcasters, most non-profits don’t qualify for tax-deductible status, and we don’t have the same philanthropic tradition as the US. Our newspapers have also held up better financially than those in the States.

Still, Lewis is convinced there is a global trend towards philanthropic journalism — and he expects the Australian scene to expand.

“Five or 10 years ago in Europe, the journalists would say that’s fine for America but there isn’t any money here,” he said. “Now there are 10-15 foundations funding journalism in Europe. There are non-profits in Britain, Italy, Nepal, Peru … People have come to see it in the way they support symphonies or libraries because they realise if they don’t have information they don’t have a community.”

While he supports diversity and experimentation, Lewis does have some advice on how to make a non-profit work.

When it comes to the journalism, he favours a tightly focused approach: there’s no point replicating what existing media outlets already do well. And he supports non-profits teaming up with big-name media outlets to research and publish stories (as long as they share editorial values). The scrappy non-profit gets the eyeballs it needs, the commercial outlet gets the content it lacks.

It’s the business side, Lewis says, that often proves more difficult and divisive. It’s one thing to get a start-up grant; it’s another to find the long-term funding needed to make an organisation sustainable. Lewis favours diversified revenue streams over sites funded by a single cashed-up individual.

“When you have some level of control by one person or interest you’ll always run the risk of alienating folks or being at the whim of one person,” he said. “Just like a reporter wants to have lots of sources, an organisation should have a lot of different funding sources. The Center for Public Integrity today has 50 foundations funding it from all over the world; it’s very hard to say it’s dependent on any one grant. To me it’s a more independent and stable organisation as a result.”

Lewis says all non-profits, whether big or small, should publish detailed annual reports, disclose the identity of their donors and have clear policies on who they will and won’t take money from. The Center for Public Integrity, for example, won’t take money from unions or corporations because of the political overtones.

He also stresses that being a non-profit needn’t mean a total dependence on charity: events, books and deals to provide commercial outlets with content can all help bring in cash. Half the Investigative Reporters’ Workshop’s income now comes from earned revenue. The workshop recently scored a US first by announcing it would co-fund the salary of Pulitzer Prize-winning reporter John Sullivan with The Washington Post.

Twenty-five years on, Lewis looks back on his impulsive decision to quit 60 Minutes as one of the best he ever made — especially when he surveys the world of commercial television: “So much of what is presented as journalism is celebrity, it’s hype, it’s manufactured, and it makes me want to go to the nearest window.”

Not that he despairs for too long — he’s filled with optimism by the way non-profits continually find new ways to keep the bastards honest and keep the public informed.

“This is a wild and exciting moment in the history of information and truth-telling and reporting — good ideas are going to emanate from all over the place,” he said. “Nobody knows how this movie ends, but it sure is exciting.”

Bearing in mind the aversion the USA often has to learning the truth about its governance it’s a miracle Charles Lewis isn’t accommodating the cell adjacent to Bradley Manning.

One of the criteria for any new attempt at truth telling ought to be NO JOURNALIST need apply. There may be some with integrity (Lenore Taylor, Jessica Irvine, Ross Gittins come immediately to mind)but, on the whole the majority have spent so long grovelling and betraying any principle they may once have had that they would do the community greater service if they were set to picking oakum.