Eye spy. It’s good to see News Corp CEO Robert Thomson hasn’t lost touch with his roots. The lanky Murdoch lieutenant, who grew up in rural Victoria and kicked off his career at the Melbourne Herald, was spotted cheering on the Essendon Bombers at the MCG on Friday night. Luckily for him, the spectacle proved more enjoyable than examining The Australian’s balance sheet or the performance of his editorial chiefs in the Sunshine State (Queensland editorial director David Fagan and Courier-Mail editor Michael Crutcher both left the company yesterday). The Bombers scraped home against Carlton in a five-point thriller.

Pyne calls Gillard a “lying tart”? In light of the Mal Brough menu brouhaha and the Coalition being painted as misogynists, one reader pointed us in the direction of the recent fascinating profile in The Monthly on Christopher Pyne:

“On a filing cabinet [in Pyne’s office] is a picture of Julia Gillard beside the phrase ‘Flying Start’. The first letter of each word has been crossed out.”

As the tipster noted: “The Libs do seem to think about Gillard and s-x a lot, don’t they?”. It does seem like it …

Speaking of s-xist insults … For all the claims of Lefty ABC bias, we’ve heard complaints of “perfectly polite and reasonable comments” supporting the Prime Minister had been removed from this ABC News Breakfast Facebook thread about the gender debate getting “reignited”. But according to a new Facebook update, comments haven’t been deliberately deleted: 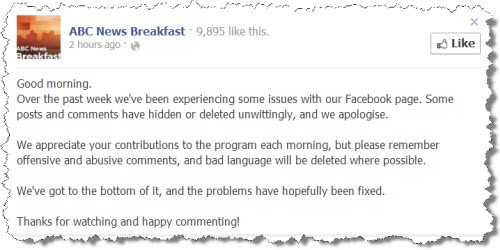 There’s certainly a large amount of comments sledging Julia Gillard that remain on the original post, including ones calling her “a back stabbing bitch” and a “despicable witch”, plus a bunch of other vitriol that we’ll choose not to republish. Tips reckons a bit more Facebook comment moderation on an official ABC page wouldn’t go astray …

Qantas v BAC up north. Plus, some Queensland aviation gossip from a Brisbane business veteran:

“Regular business travellers to Brisbane would be getting used to the delays caused by airport congestion, often leading to annoying scenic flights over the Gold Coast hinterland at about the time scheduled meetings in Brisbane are due to start.

“The congestion has become the subject of a bitter standoff between the airport operator, BAC, and Qantas over the airline’s stubborn refusal to observe the conventional pre-funding model for this sort of infrastructure. Qantas has managed to co-opt the local newspaper, The Courier-Mail, who has been campaigning hard against the evil privatised monopoly airport.

“Lately, travellers have noted Qantas pilots have begun reading from a clearly prepared and very specific script, pointing the finger squarely at BAC and urging customers to ‘write to your local member’.

“It is getting very public. Maybe next we will see BAC suggest passengers write to pollies about airlines gouging passengers for phantom fuel levies, credit card fee ripoffs or those annoying extras that airlines build their margins on.”

Circulation spinning. Tips always enjoys knowing exactly how newspapers get away with bumping up their circulation figures, such as Tuesday’s photo of an abandoned stack of The Gold Coast Bulletin. One reader fills us in:

“On holiday down south of Sydney the local supermarket was giving away free copies of The Daily Telegraph. So yes, it would be charitable to say that the circulation figures for News Limited are fantasy!”

Let the Nazi flag flyer stew in her own bigotry

Flying Nazi flags is abhorrent. But new laws against them won’t make the slightest difference to Australia's drift to authoritarianism.

The Eros Association's annual adult industry night is a reminder that there's a passionate resistance to Australia's moralising over adult content.

Bureaucrats like those in the Attorney-General's Department have such extensive powers in our police state that even friends of the government aren't safe.

Re circulation – The maccas in braddon (canberra) is giving away free copies of the daily tele or its sunday edition with some level of purchase, at least in the drive-through.

I’m not sure if it’s working – I went through drive-through three times with the sign up recently (I don’t know if it still is), but I didn’t actually see take the paper!