What the heck is Gonski? Richard Farmer doesn't think the election will hinge on education reform. Plus other political views noted along the way.

Still confused by Gonski. Perhaps I needed the better education that the Prime Minister keeps promising, but I still have no idea what these Gonski reforms actually are apart from a promise to spend many more millions. And I doubt that I am Robinson Crusoe. I’ll be staggered if education is an election winner.

What will the verdict be? The most influential factor in Labor leadership contests always seems to be what the pollsters say. Newspoll, Nielsen and our very own favourite Essential will be hard at it over the weekend to deliver a verdict. What will they report? Once again I am relying on the wisdom of the Crikey crowd to provide an early clue by taking part in the Chunky Bits survey of what the pollsters will find.

For what it is worth — and I am sure it will be less accurate than the accumulated views of Crikey readers — here are my predictions: 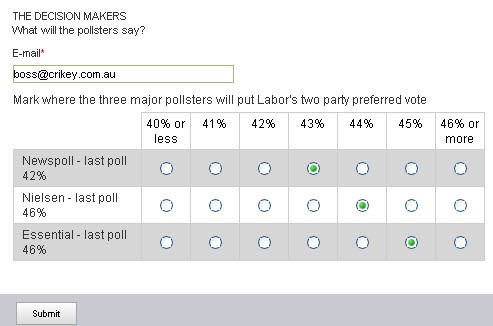 A report tomorrow on what you predict. Make your predictions here.

PS — The requirement of an email address is designed to stop silly multiple predictions, and they will be wiped come Sunday and not used for any other purpose.

The glories of federalism. It’s not just here in Australia that absurdities arise because of the division of powers between state and federal governments. In Canada soccer mums of Quebec are caught up in a wonderful dispute about turbans.

The provincial soccer association, you see, for some reason determined that it was not right and proper for Sikh children to play the game with their turbans on. Gave the little eight- and nine-year-olds an unfair advantage when heading the ball was the argument. Not so, said the national soccer body. The international soccer federation had made no such decree, and turban-wearing kiddies were welcome to play the game. Quite right, agreed the Canadian government.

A breach of state rights, said the governing party of the province, which argued its state soccer body had the right to set its own rules. A penalty shoot-out in the national courts is surely coming.

That declining labour share of the economic pie. I wrote yesterday of the ILO reporting on the worldwide decline in labour’s share of gross domestic product, and my attention has now been drawn to a persuasive description of how Australia fits into the international pattern. In a Working Australia Paper published by the Australian Council of Trade Unions, Matt Cowgill, the organisation’s economic policy officer, comprehensively debunks the idea that Australian wages growth is unsustainable, or threatens to become unsustainable.

“This paper shows that Australia has experienced the opposite of a ‘wages breakout’ since 2000. Over this period Australian real wages have not kept pace with productivity growth. This means that labour’s share of total income has fallen and capital’s share has risen. “We would now need a period in which real wages rose faster than productivity growth merely to restore the labour income share of the 1990s.” The US economy is facing catastrophe and witnessing what might be a second wave of job losses brought on by the pandemic.

Post-election, Alberta and Saskatchewan are making renewed calls for separation. But the whole idea is crackers — for now.

Recent incursions on Australia's free press have shown once again that, without a national bill of rights, liberty is treated cheaply in Australia.

Richard, here’s plenty of reading on Gonski, including a link to the full report.
http://www.appa.asn.au/gonski-report.php

I think plenty of public school teachers, and parents of children at public schools, see education as an election issue. Plenty more are worried about the Coalition’s plans to privatise education.

gonski is about a new funding model. changing the way schools attract funding in relation to the types of kids that go there and their associated needs. its not just more money it is supposed to better help the most disadvantaged and therefor be fairer.
i think ……….