Remember Greece? We've heard a lot about Cyprus in recent times, but Greece is still a basket case and going from bad to worse. 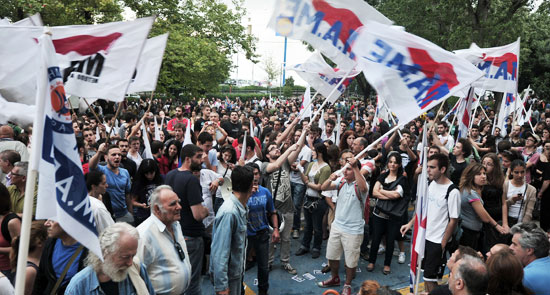 Greece closes public broadcaster to cut costs, the headlines tell us. You can almost hear Tony Abbott and his friends at the Institute of Public Affairs musing, “That’s the way to handle the ABC”.

If you have missed it, the conservative government that has been running Greece for the past year took an extraordinary step on Tuesday and closed the state owned broadcaster, ERT, claiming it was a cost-cutting move, with a new, slimmer version of the group to reopen later in the year. ERT has three TV channels that have a collective share of around 13% of the country’s viewing audience.

The move, and the uproar it has caused, thrust Greece back into the spotlight after months of being ignored. But ERT’s closure isn’t the only event this week that tells us the country remains a basket case. On Monday the government failed to sell a state gas company (so that means less money to pay off the country’s enormous debt bill). The sharemarket also fell to a tw0-month low this week.

The government had been negotiating cuts of 7000 jobs from the public sector — or around a quarter. This is the first serious attempt to reduce the size of the public service, after tens of thousands of jobs have been lost from the private sector in the past three years of the crisis.

There were 2650 working for the public broadcast — most of the non-journalists — and the government plans to halve that number when the service reopens. Under the terms of the last bailout, Greece has promised to cut 4000 public service jobs this year and another 15,000 by the end of 2014. Around 2000 jobs are supposed to be cut this July alone. If the reaction to the closure of ERT and the proposed job cuts are any indication, Greece faces a very difficult summer.

Unions have called two general strikes for later today, and more than 5000 people were reportedly gathering outside the broadcaster to protest against the decision. Journalists inside the head office are keeping some services going via the internet and satellite equipment in a car park.

This story is a reminder of how little has been done in Greece to spread the burden of the restructuring as wide as possible since its last bailout a year ago. Despite a strong rise in the country’s sharemarket and a fall in the market yields on its debt (and the near collapse and bailout of Cyprus), the country remains stuck in a recessionary rut, with high unemployment and no one willing to meet the cost of reform and revival.

This was recognised, of all people, by MSCI, the company that organises some of the world’s major stock market indexes. This week it downgraded Greece from “developed market status ” to an “emerging market” status. Investors controlling an estimated $US7 trillion in funds track the MSCI indexes from markets around the world. Greece was upgraded to developed country status 12 years ago. Now it’s going back to its old status.

The current ruling technocrats just want to install some right wing puppets at the new station.