Buckets of ink on what’s wrong with Labor

Every publisher in the country is releasing at least one political book this year, and although they vary in style, there’s really only one overarching theme: "What the F-ck is Wrong with the Labor Party?" 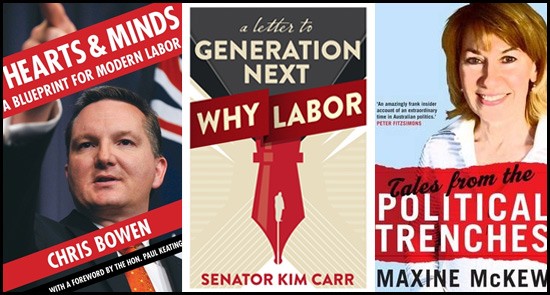 For political tragics, these are the best of times. For the next 94 days, we can just lie back and enjoy the fabulous soap opera that is a federal election. But sometimes more than just a third-hand opinion about the latest poll is needed. That’s when we reach for a good book.

Between now and Christmas, every publisher in the country is releasing at least one political book, and although they vary in style, there’s really only one overarching theme (soon to be the subject of countless PhDs). It is: “What the F-ck is Wrong with the Labor Party?”

The problem with producing books in an election year, of course, is that, in an era of 24-hour news, much of the contents of a book of “contemporary history” can read like reheated news. To be relevant, they have to get inside an election campaign and give us new insights, like Game Change, about the 2008 Obama victory, and The Victory, Pamela Williams’ book about the successful 1996 Liberal campaign.

Hunter S. Thompson’s 1973 book, Fear and Loathing on the Campaign Trail, which started as a column for Rolling Stone magazine, was the forerunner of the gonzo political blog. But in these straightened times it will never be repeated — what publisher could afford that amount of speed and cocaine? Author advances are now so low, they are probably all writing on Nescafe.

So what’s in store? Next month will bring the publication of Hearts and Minds by Chris Bowen and A Letter to Generation Next — Why Labor? by Kim Carr, both from Melbourne University Publishing (disclosure: my own publisher). Both these books belong in the sub-genre of “How to Fix the Labor Party”, aka the legend of Sisyphus.

Some of the authors are holding fire till after the election in order to give the result some analysis. Former politician Maxine McKew is updating and re-releasing her MUP book Tales from the Political Trenches before Christmas, at which time Black Inc will release Not Dead Yet;What Future for Labor? written by former Labor leader Mark Latham, with others.

Peter Van Onselen and Wayne Errington, who co-wrote an excellent biography of former PM John Howard in 2010, will produce a book about the minority government called One Thousand Days in Hell (MUP) after the election.

“Between now and September, much blood is about to be spilt. We need to smell it.”

Other books include The Blame Game (MUP), an insight into campaigns and elections, from Rudd adviser Bruce Hawker, while Stalking Julia, by former Fairfax journalist Kerry-Anne Walsh, is due out on July 24. Allen & Unwin is giving away little about the book, described as the inside story of how the media and Team Rudd contrived to bring down the PM, as the final chapters are undoubtedly still being written.

It will be interesting to see whether the general public, already showing signs of Canberra fatigue, will be buying these books in large numbers, and which ones they buy. A spokesman for Bookscan says the best-selling political books are biographies, the sales figures for which are directly related to the prominence of the author. This makes me think that Kim Carr’s book could struggle, unless it contains some fantastically sordid details of being offed by Gillard after supporting Rudd.

Up until recently, the accepted wisdom was that conservatives didn’t write books, and when they did, they sold less than those from the other side. This was turned on its head in 2010 when Harper Collins published Lazarus Rising by John Howard, which sold about 90,000 copies.

Some authors are already looking to a post-election landscape. This month Scribe Publications will produce a book called Why Labor Should Savour its Greens, by former investment banker and economist Brad Orgill. He reviews the Greens’ major economic, social and environmental policies and argues that progressive voters deserve an aligned ALP-Greens platform incorporating the best elements of each. Orgill argues that is a time for vision, not division.

It’s a very well-written, stimulating book, which should inspire a whole new version of fantasy politics, in which we design our own Canberra dream team — and wouldn’t that be a great card game?

But why don’t we have an Australian version of the best political series ever written, The Alan Clark Diaries? In them Clark, a British cabinet minister and Nazi sympathizer, details his rampart s-x life, including an affair he was having with the wife of a South African judge and her two daughters, collectively known as “the coven”. More importantly, the diaries, published between 1993 and 2002, contain a definitive account of the fall of Margaret Thatcher.

Australian authors, take note; we don’t need another book about how the Accord saved Australian industry; we want books which either look to the future or get us in the room with the knives. Between now and September, much blood is about to be spilt. We need to smell it.

Australians all let us be cynical: PM’s anthem change a one-word flop

Unfair. Everyone should Carr’s book. It ought to be a manual on what NOT to do. In fact, anyone he recommends should be offed.

Labor has well and truly lost it. We need a new party to replace them. We can save time and borrow the Libs constitution. Sure they won’t mind. Not like they’re using it.

Leave the dead to read the dead. The only counter to the coming tory terror is the Greens. And a non government Senate.

Margot Saville. I certainly need to smell the political blood which I have worked so long and so hard to spill. In fact some black sausage and Labor rump at the after party would be great. Labor is the way it is because its grass roots members and supporters have let it happen. Now it is time for Australian voters to properly exercise their votes to put out the garbage. I write like this because of first hand experience going cap in hand to Labor party members with problems. Problems which I have taken to identifying in print as political sins against the peoples. I am not the first person to be ignored by a politician, in fact a string of politicians and political leaders. I may not be the last. I resolved to buy pages in the local papers (over fifty to date) and make these “political sins against the peoples” something for the peoples court of public opinion to consider on the way to work. Too many politicians ask us to give our votes to them in trust. The moment they are elected they put a wall of tax payer funded employees around themselves. And go into lock down. Often making changes exactly opposite to what they promised their constituents while on the hustings. There is a certain amount of shame owned by journalist who read often published allegations and look at the photographic evidence. About a council misleading a state coroner then turning away. Perhaps those same journalist know the coroner was happy to be mislead. Systemic misgovernance, malfeasance and corruption are legal terms which may apply in another place. For my purpose I identify what I pay to expose in our local newspapers as political sins against the peoples. I have a very instructive photo of Labor AG at the time John Hatzistergos reading a double page allegation about wrongful deaths. A story in the public domain. Which I told him I would run with when next he stood for election. Labor leader John Robertson knows all about it. In fact John Robertson told me I would never get another photo op with Labor. It is beginning to look like State Labor leader John Robertson may be able to see into the Federal election future. Which is certainly tied to Labors drawn out death throes as a political party nationally Local, State and Federal. Edward James

“Labor is stuffed” is definately the theme i’d run with if i wanted sales/airtime in the billionaire media.