Wesfarmers board to blame for Target layoffs

Wesfarmers has continually mismanaged Target, and as a result hundreds of people have now lost their jobs.

Some 260 people have lost their jobs at Target’s Geelong headquarters today. The blame lies squarely with the board and senior management of Wesfarmers, who were asleep at the wheel and allowed the retailer to develop a bad list under a former CEO.

It is a home-grown disaster for the people who have lost their jobs and need not have happened if the management at Target had been changed more quickly and corrective action taken to right the ship. Yes, retailing is sluggish, but Kmart, the other department store chain owned by Wesfarmers, continues to grow solidly (good management), as do Bunnings and Officeworks and Coles (good management).

Target is an exception, and its problems have been apparent for months in Wesfarmers’ sales and trading updates and profit announcements. The job losses trace back to a surprise announcement on April 8, when Wesfarmers revealed that Dene Rogers, then CEO of the chain, was leaving. His departure came 10 days before a third-quarter sales up date from Wesfarmers. The April 18 sales update said about Target:

“Target recorded total sales growth of 1.0% during the quarter with comparable sales 1.9% above last year.”

And the February profit announcement said something similar: Target’s revenue edged up half a per cent to $2.1 billion, comparable store sales fell 1.8% and earnings before interest and tax fell more than 20% to $148 million. Stocks were higher than normal, but the company said management were spending money on transforming the business’s offer to customers through the shops and online. “Target’s cost position is expected to return to a more normal level in the second half of the financial year,” management forecast.

That failed to happen because Rogers was removed. The sales update told us the chain was stagnating, and then in mid-May, Wesfarmers issued a statement giving the bad news on Target’s trading performance.

As a result, Wesfarmers says it now expects Target’s earnings before interest and tax (EBIT) for the 2013 financial year at between $140 million and $160 million. This compares with an EBIT of $244 million in 2011-12 and analysts’ expectations for this year’s full-year earnings of around $230 million. That means it is likely Target will have a second half result somewhere between a profit of $12 million and a loss of $8 million — against a profit of $91 million in the last half of 2011-12.

But there has been no mention of the most curious story of all to involve Target and that is the case of the allegedly counterfeit cosmetics. US cosmetics giant Estee Lauder started legal action against Target Australia late last year, claiming that the department store was selling counterfeit MAC cosmetics. As a result, Target was forced to strip its shelves of the products, which are Australia’s biggest-selling prestige cosmetics range.

The cost of this “de-stocking” isn’t known, but you can bet it had an impact on sales and in that earnings downgrade. And, if Estee Lauder is right, then there might be worse financial news to come for Wesfarmers. The cost to Target of this problem would be in the millions of dollars. Are the staff now losing their jobs paying the cost of this, as well? 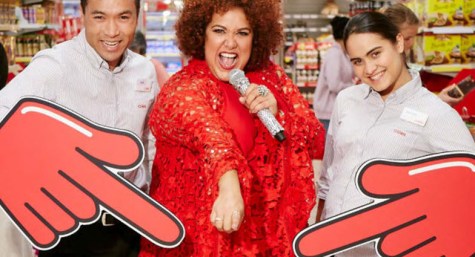 Salary watch: what is the new CEO of Coles making?

Warnings to Woolies from US hardware partner