The US government is planning to to declare all chimpanzees endangered, an act that would provide stronger protections and potentially end nearly a century of using great apes as test subjects for invasive medical research.

The ultimate spin. I am surprised at how supinely the media have taken the latest piece of political spinning — the video press release. The government’s image makers were responsible for the pictures of Julia Gillard speaking at the launch of Women for Gillard. As the ABC noted, without making a big thing of it, and most others in the media ignored completely, “the launch was closed to the media but vision was provided by the Prime Minister’s office”. The new age of journalism without journalists has arrived.

A smaller piece of the pie for workers across the world. I noted briefly in these little snippets many, many months ago now, how labour’s share of the economic pie in Australia had declined noticeably in recent years. Now the International Labour Organisation has come out with a report showing there is nothing unique about our country’s experience. Capital has been grabbing more virtually everywhere.

The recently released Global Wage Report 2012/13 draws attention to the way that labour’s share of gross domestic product is declining significantly. The ILO notes how the Organisation for Economic Co-operation and Development has observed, for example, that over the period from 1990 to 2009 the share of labour compensation in national income declined in 26 out of 30 developed economies for which data were available, and calculated that the median labour share of national income across these countries fell considerably from 66.1% to 61.7%:

“The global trend has resulted in a change in the distribution of national income, with the workers’ share decreasing while capital income shares increase in a majority of countries. 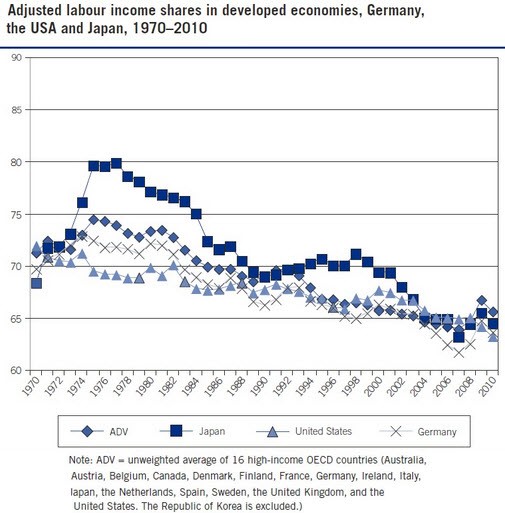 “Even in China, a country where wages roughly tripled over the last decade, GDP increased at a faster rate than the total wage bill — and hence the labour share went down.

“The drop in the labour share is due to technological progress, trade globalization, the expansion of financial markets, and decreasing union density, which have eroded the bargaining power of labour. Financial globalisation, in particular, may have played a bigger role than previously thought.” Saving the chimps. The US government is planning to to declare all chimpanzees endangered, an act that the Washington Post reports would provide stronger protections and potentially end nearly a century of using great apes as test subjects for invasive medical research.

Back in 1990 the US Fish and Wildlife Service classified wild chimps as endangered and captive chimps as threatened, a designation that carries fewer protections. The “split listing” under the Endangered Species Act, the only one in the history of the agency, was designed to allow the National Institutes of Health to fund medical experiments using captive chimps, agency director Dan Ashe told the paper.

“Ashe said the new rule sends a clear message that, contrary to popular belief, the survival of all chimps is threatened.

“More than a million have disappeared from the wild since the beginning of the 20th century, according to estimates by theInternational Union for the Conservation of Nature and Natural Resources. Fewer than 300,000 remain, as people invade chimpanzee habitats, using the land to farm and hunting the animals for meat, according to IUCN’s Red List of Threatened Species.

‘The most important thing about this is it brings attention to the plight of chimpanzees in the wild,’ Ashe said. Because chimps are often dressed in clothing and used as comic relief in movies, Americans do not believe they are endangered, he said.” “Do you know what scares me more than terrorism? A polity that reacts to fear by ceding more autonomy and power to its secret police.”

What chimps tell us about the new UK government

The story behind the grieving chimps photo

“The new age of journalism without journalists has arrived.” About time!

Do politicians “spin” for any more reason than to off-set the spin imparted by partisan, opinionated op-ed run media, who edit that “information” medium – limiting our voter view of reality to their version of it?
Is their spin a resultant form of self-defence, from a media and the way it has been run down?