The Market is down 34. ASX 200 Futures were down 40. The Dow Jones finished down 117. The Dow was up 12 at best and down 153 at worst. Worst sectors — energy, financials, materials. US wholesale inventories were +0.2% for April which was in line with the forecast but below the previous reading of […] 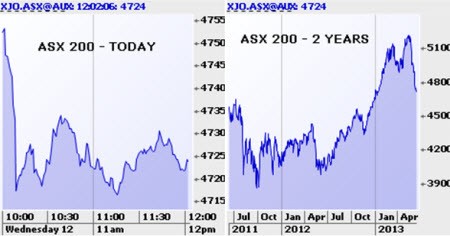 US wholesale inventories were +0.2% for April which was in line with the forecast but below the previous reading of +0.35%.

The Bank of Japan’s decision to maintain their stimulus measures underwhelmed global markets who expected the central bank to address recent bond market volatility. Japan’s Nikkei 225 finished down 1.45% yesterday on the news.

European shares fell to six-week lows on Tuesday on concerns that the ECB’s support for markets was turning more cautious. European bond yields up. European markets down — UK FTSE down 0.94%, Germany down 1.03%, France down 1.39%, Spain down 1.68%, Italy down 1.63%.