Cox to Gillard: take gender distractions off the menu

Feminist scholar Eva Cox argues the Women for Gillard campaign is a divisive distraction -- and the Prime Minister's attacks on Tony Abbott over abortion are a "red herring". 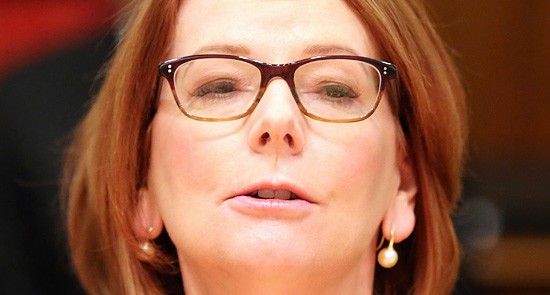 Prime Minister Julia Gillard’s appeal for women to vote for Labor — most notably through the Women for Gillard group, launched yesterday — is a rather desperate attempt to exploit the gender tensions that exist in our society. Her misogyny speech last August was clearly delivered with passionate anger and became a worldwide hit, as many women shared her experiences and cheered her.

The question is whether this current rather limp, probably professionally devised, follow-up is a useful addition for a very problematic campaign and leader. In the midst of another burst of speculation about her possible replacement, it feels somewhat like a distraction.

There is no doubt the PM has been subjected some extremely nasty s-xist and misogynist pressures, including irrational and wounding personal attacks that have no political basis. Just look at the s-xist menu at a Mal Brough fundraiser, which came to light today and featured a dish called “Julia Gillard Kentucky Fried Quail — Small Breasts, Huge Thighs & a Big Red Box”.

For many of her political enemies, the PM’s gender has offered a handle to exaggerate her presumed sins and it illustrates the discomfort many still feel about women in power positions. The flak has meant that many women have used her plight as a symbol of the wider continuing inequities women face, for example Anne Summers and her work on The Misogyny Factor.

But there’s a big gap between welcoming the arrival of Australia’s first PM, governor-general and attorney-general (as well as the introduction of reforms such as paid parental leave) and pitching the gender vote for a party as if it were a foregone conclusion. Gillard’s speech at the launch played the party line, listing a range of policies assumed to be “women’s issues”, but omitting the negatives such as cuts to sole-parent incomes.

The pitch, carefully crafted no doubt by a backroom operator, was naively designed to appeal to women by playing the man (Opposition Leader Tony Abbott’s blue ties) and raising the classic feminist issue of abortion. By raising these spectres, the assumption was that women would flock to the cause and vote ALP.

This gendered approach has serious problems. One is that there is no clear “women’s vote” but a diversity of electors making up their minds on a range of issues. Women have never voted as a bloc. Some may be annoyed at the assumption crude gender is one of their factors. The other is that it encourages the Punch and Judy personality games that already undermine too much of this election campaign. It takes over from examining policy differences and making reasonable judgements.

The claim that Labor is the party for women is bad strategy and insults the many small-L liberal women who have done hard work on women’s issues. Both political parties have good and bad gender records. The ALP has done more for women and has more female pollies, but the Liberals have senior women — Deputy Opposition Leader Julie Bishop, for one.

The abortion issue is a bit of red herring, as its legality is a state issue and only its funding is federal. Its record is mixed: Howard sold out to independent senator Brian Harradine and cut family planning overseas aid in return for privatising Telstra, but Opposition Leder Tony Abbott was defeated on RU486 by women across party lines, not just the ALP. This is Abbott’s weak spot but has been raised before, and he has stated he will not change the current position. The ALP has some hardline pro-life members too, so it treads carefully here, too.

There is already too much of playing the man and woman, not the “balls” in this campaign and this push just adds to it. The strategy may weaken the wider support that Gillard has attracted by pushing claims for party loyalty, which is already a negative for Labor. The campaign needs good policy and politics. The widespread general distrust the public has for both the major party leaders, and politicians generally, will not be reduced by this initiative.

Along with Sophie Mirabella, Julie Bishop is one of the least impressive and deserving women in politics. They’re not exactly exemplars to follow.

We now have a ‘feminist scholar’ attacking the first female PM because she dares raise issues surrounding women’s reproductive rights during a campaign against a man with a long history of completely missing the point when it comes to gender politics.

Prime Ministers should be above this sort of crass politics – that’s why they have “head-kickers” …. like Howard’s “real” Abbott.

Yes but with the exception of Melissa Parke and Judi Moylan all the women in parliament voted to torture and jail refugee women, traffic them to Manus and Nauru and jail some of them for life while denying them all legal rights.

I don’t want bloody women like that in charge of anything thank you.

They all voted to plunge single mothers into dire poverty, to dump refugee families on the street with no means of survival and they all sit around making their big money by saying nothing.

Kevin Rudd is the first person in 3 years to mention the refugee convention and why it exists and he was utterly ignored by lazy, racist ignorant media and other pollies while they whinged about him speaking.

He is allowed to speak.

But “men in blue ties” and ” women for Gillard”” is the most pathetic thing I have seen since 1965, where does Gillard think she is? Saudi Arabia.