Mal Brough's remarkable offensive misjudgment has overshadowed a misjudgment for the Prime Minister that might have proved costly.

This piece was going to start with how Julia Gillard had lost the plot with her remarks about gender and abortion yesterday, that it was a desperate effort to return to the misogyny debate that had served her well last year in the hope that she could shift talk away from ex-PM Kevin Rudd and return the focus to Opposition Leader Tony Abbott’s weakness on gender issues.

That piece is rather harder to write after former Queensland MP Mal Brough’s menu emerged with its grossly sexist and offensive description of the Prime Minister, as if to demonstrate that a contempt for women indeed lurks among some on the conservative side of politics. The source of the menu shot, on Twitter as @chef09876, had copied it from the Facebook page of the executive chef of the restaurant where a Brough fundraiser, featuring shadow treasurer Joe Hockey, was held on March 28. Despite the timing, a link to the ALP or the Prime Minister’s Office isn’t clear, although the tweeter is clearly an ALP supporter.

Abbott this morning criticised the menu and put it in the same league as the comedian, hired by the CFMEU, who made a “joke” about Abbott and his chief of staff in front of Treasurer Wayne Swan and other Labor figures last year, a rather arguable comparison. He also said it would have no impact on the preselection of Mal Brough. Hockey also condemned it, saying he never saw it — a claim far more plausible than Brough’s similar excuse.

The menu was the sort of s-xist garbage that Gillard has endured since she became Prime Minister. All female politicians, of whatever stripe, endure a double standard and constant focus on their appearance and family circumstances, but as Prime Minister Gillard has been attacked in the most vile and offensive terms by the lunatic fringe of the Right, talkback radio hosts, Coalition MPs and by News Ltd outlets like The Daily Telegraph and The Australian.

It was only yesterday that Essential Research showed that far more women than men — 61% to 42% — think sexism is a problem in Australia. It’s not a “problem” for men, of course, because they aren’t routinely subjected to this kind of garbage — the demeaning comments about their bodies, the reduction of their entire worth to their physical attractiveness, and the constant need to demand that people behave with a modicum of respect toward each other.

Gillard’s comments yesterday were also unexceptionable up to a point. She was correct to note that the defeat of her government — whether by the Coalition in September or by Kevin Rudd before then — will result in a marked diminution of female participation at the highest levels of politics. But she then leapt from that to the issue of abortion — despite Abbott’s personal history, there is no evidence of a Coalition threat to reproductive rights. It was clearly an effort by the Prime Minister to shunt debate away from Kevin Rudd and back to an issue on which Gillard is perceived to have an edge on Abbott. That was the point at which a significant misjudgment was made, either by the PM herself or by her brains trust and communications director John McTernan.

That, however, has now been overshadowed by an altogether vaster misjudgment by Mal Brough. Brough, despite not even being in Parliament, has demonstrated a colossal capacity for misjudgment, not just in the view of journalists or commentators or political opponents within and beyond his party, but in the view of a Federal Court judge, in the Slipper-Ashby case. Even assuming purely for the sake of argument that Brough is the sort of “man” who would find the menu amusing or appropriate, to entertain the shadow treasurer and allow it suggests a complete lack of political understanding, or a similar lack on the part of his staff if we accept his claim that he was unaware of material being distributed at his own fundraiser. Hockey must be mortified. The net result is that a moment that might have indicated that Gillard had lost her judgment has blown up for the Coalition.

And it’s unclear exactly what Mal Brough has to do before the LNP works out that his return to federal politics will pose a substantial risk to his party. 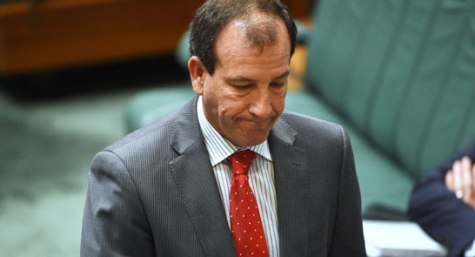 Unicorns, Freemasons and the Devil: Google and our pollies

I still don’t understand why this and the other “incidents” at LNP fundraisers have been repeated endlessly by the media, yet the “joke” at the Labor fundraiser ended with unanimous media-wide self-censorship on reporting what was said.

“Prime Minister Gillard has been attacked in the most vile and offensive terms by the lunatic fringe of the Right, talkback radio hosts, Coalition MPs and by News Ltd outlets like The Daily Telegraph and The Australian.”

Not quite sure what your saying here.

Are the offensive attacks just coming from the lunitic right wing fringe in which case you are including talk back hosts. coalition MPs the DT & the OZ in the lunatice fringe ( actually a fair call) or are you sayiong the entire right wing indulges in these offensive, peurile and sexist attacks…again a fair call

“but as Prime Minister Gillard has been attacked in the most vile and offensive terms by the lunatic fringe of the Right, talkback radio hosts, Coalition MPs and by News Ltd outlets like The Daily Telegraph and The Australian.” That seems to be right up to the point where you start to include Coalition MPs (though no doubt there have been the odd tasteless alcohol fuelled droppings), and News Ltd outlets…..”. I’ve seen some of the crude non mainstream blog material but how do you justify those last assertions?

@ Brad Sprigg: Walter Cronkite got it in the 1960’s visiting Australia:

“Too many reporters. Not enough news”

My own reaction, and I think that of a lot of politicians, would be to glance at the menu and immediately grown wearily at the immediate evidence at the top that it was going to be full of weak jokes. Politicians are never nearly as enthusiastic about the highly partisan as those who support them in and out of the party branches and don’t get a thrill out of reading or hearing it. So….. I am inclined to give Mal Brough the benefit of the doubt even though his word on the subject has to be given the Mandy Rice-Davies treatment.

Another reason for doing so is that he must, surely, in quite a sucessful career as a Howard minister have been sensitised to that sort of unpleasant disrespect for others. Especially after the judge’s criticisms (made without hearing any evidence from Brough and saying more about the deficiencies of some judges than anything reliable about Brough) Brough would have to be thick in a way which doesn’t seem to be the reality if he didn’t pick up the offensive words and at least make some public deprecatory remarks early on in the dinner.

And, if he is that insensitive, but still an able man (as he is undoubtedly) , three years on the backbench under a PM who has to be careful he and his troops don’t drop sexist clangers should provide enough further education.

Mind you, there would be a lot to be said for him being given a subordinate job in Aboriginal Affairs rather than just leave him on the back bench. He would have the advantage of knowledge of the portfolio and an ability to adopt better informed and more up to date views and policies in 2013 because he can say that his (and Howard’s policy) has been retained in principle but that a lot has changed under the Rudd and Gillard governments.