From the Crikey grapevine, the latest tips and rumours … Who’s the M-pee? Which Liberal MP apparently pissed in someone’s shoe while a little under the weather at a Japanese restaurant in Canberra last week? Shortening his odds. Canberra’s been buzzing all weekend over news that Labor powerbroker Bill Shorten may or may not withdraw his […]

Who’s the M-pee? Which Liberal MP apparently pissed in someone’s shoe while a little under the weather at a Japanese restaurant in Canberra last week?

Shortening his odds. Canberra’s been buzzing all weekend over news that Labor powerbroker Bill Shorten may or may not withdraw his support for the prime minister. This hot tip from the 3AW Rumour File this morning interested us:

“Unnamed caller states that over dinner with politics students at Melbourne University, a former prime minister said there are two compelling reasons for the ALP to change leaders now: if Kevin Rudd was leader again, the primary vote couldn’t get any worse, and should Rudd lose, it would finally put him to rest and preserve the hopes of Bill Shorten for future elections.”

Any idea who the ex-PM was? Malcolm Fraser? Bob Hawke? Contact us if you know. Also, if you’ve got any goss from inside the world of Shorten — it’s not like his leadership ambitions are unknown — get in touch.

Raising the white flag in Melbourne Ports. Some MPs may be packing up their Canberra offices in anticipation of the election bollocking, but Michael Danby, the federal Labor member for Melbourne Ports, has undertaken some capital works to improve his image coming into September with new signage and a new Australian flag. 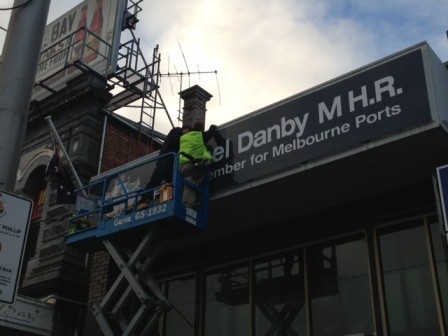 One Danby constituent told Crikey: “Three months out and it seems there is no end to the financial wastage that the Labour party continues to undertake. I suggested that rather than screw it in, that velcro or wing nuts be used.”

Have you noticed any other MPs making changes to their election offices? Drop us a line (and yes, please send us photos).

Battle for Batman continues. Senator and wannabe Batman MP David Feeney has emailing Batman ALP members on official letterhead. One local noted that it “does seem a misuse of taxpayer funds” to send out such a letter, although it slyly calls for fellow preselection candidate Mary-Anne Thomas to be allowed to run “despite Ms Thomas’ lack of eligibility”, as Crikey covered in Tips recently. 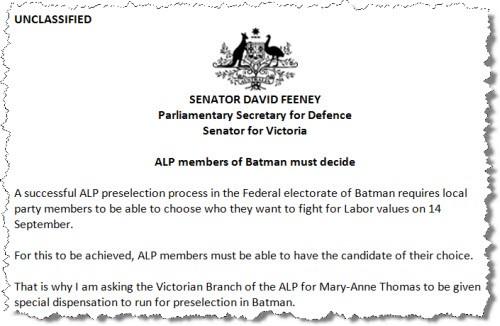 As our Batman ALP member told us:

“Apart from the usual suspects, there are a couple of other candidates who are going to put up their hands, but waiting to hear what the nomination process is, if there is one. It also appears as if Feeney and Mary Anne, has got hold of the ALP membership database before anyone else has, as they have been emailing and sending letters directly to peoples homes …” 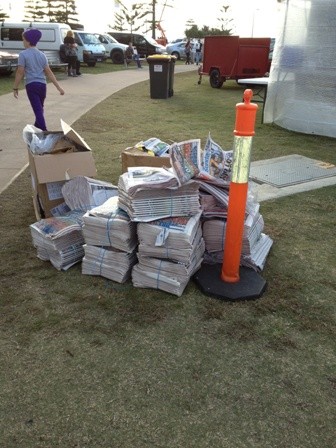 If Feeney becomes Batman, who will be Robin?

P*ssing in someone’s shoe? Whatever happened to their grand tradition of p*ssing in pockets?

Re: Surely News Limited’s largest regional newspaper doesn’t have to resort to circulation rorts? Of course they would …after-all as some people would say; we are talking about an always morally and ethically challenged News Ltd you know.

Well how about :- “Zut, she was under the weather”?