Surveillance, secrecy and the cost of intelligence outsourcing

A culture of secrecy, unaccountability and outsourcing created the conditions for the Obama administration's mass internet surveillance programs. 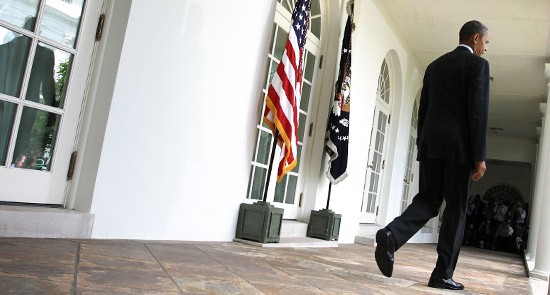 You have to wonder whether, when Xi Jinping, newly-installed President of one of the world’s most brutal dictatorships, met Barack Obama in California on the weekend, he asked his American counterpart if he had any good tips for mass surveillance and breaking into the networks of the world’s biggest internet services companies.

Only a few hours earlier, Obama had admitted that there was indeed, as per the revelations of Edward Snowden, mass internet surveillance programs run by the National Security Agency. The likes of Microsoft, Google and Apple had vociferously denied the NSA had any access to their servers. They were either lying, or their CEOs had been kept ignorant by their lawyers because of the remarkable secrecy demands of the Foreign Intelligence Surveillance Act. Or the NSA had illegally broken into their systems. It rapidly became clear that it wasn’t the last, as the extent of Silicon Valley cooperation with the NSA was revealed.

All of which rather put a dampener not merely on Obama’s plan to confront Xi Jinping over cybersecurity but on the whole “China is the world’s biggest hacker” line that governments and the mainstream media have insisted on running.

“We hack everyone everywhere … we are in almost every country in the world,” one intelligence source admitted to Glenn Greenwald, who broke the Snowden revelations. Former NSA and CIA director Michael Hayden boasts that the US is the best in the world at online attacks.

Edward Snowden, the whistleblower who revealed the population-wide extent of NSA surveillance, worked for Booz Allen Hamilton inside the NSA. How could he work for a private company inside a secretive intelligence agency like the NSA? Because for nearly two decades the US government has been outsourcing a vast array of national security functions. Why? Notionally it allows the US government to tap into private-sector expertise in areas of online communications where it struggled to keep up. But it’s also because it makes vast amounts of money for private defence and security companies. The Pentagon cybersecurity budget over the next five years is likely to rise to US$23 billion. Up to 70% of it will go to private contractors like Booz. And those companies are where most senior defence and intelligence officials will eventually work.

Take, for example, John M (Mike, apparently) McConnell. He was a former head of the NSA who was George W. Bush’s director of national intelligence (DNI). But before that, the one-time Rear-Admiral had been senior vice president of Booz. And after McConnell left the DNI role at the start of the Obama administration, he returned there. He’s still there now.

McConnell is the cyberhysteric from central casting. “We have had our 9/11 warning,” he told Congress last December. “Are we going to wait for the cyber equivalent of the collapse of the World Trade Centers?” But not merely does he warn of a digital 9/11, and of course warn of the threat posed by China, but he calls for more US government spending on cybersecurity.

“Securing cyberspace will require a more robust commitment in terms of leadership, policies, legislation and resources than has been evident in the past,” he said in February 2010. Shortly afterward, Booz picked up a lazy $34 million from the US government in cybersecurity contracts.

Fans of outsourcing, such as noted supporter of IRA terrorism Peter King, were quick to suggest that private staff employees were no more likely to be a security risk than government employees. But outsourcing expands the intelligence community (an absurd term, suggesting a folksy group of friendly, smiling cut-throats and informants, but we’ll stick with it), growing the base of firms that can lobby for government funding and also increasing the risk of a leak simply through sheer maths.

“The result is a multi-billion dollar industry employing hundreds … of companies spying on Americans and non-Americans alike, with no public oversight or accountability of any kind”

That’s what happened with Snowden, the man behind the Verizon and PRISM leaks, who decided that he became desperate to see the “federation of secret law, unequal pardon and irresistible executive powers that rule the world that I love are revealed even for an instant”. A key motivation for Snowden appears to have been the secrecy with which the US government had set out “to destroy privacy, internet freedom and basic liberties for people around the world with this massive surveillance machine”.

The leaks, then, suggest that the information asymmetry that governments crave can be counter-productive. An important feature of the response of governments and companies to the challenges of online communication is a desire to maximise the utility of the internet for surveillance — knowing all about citizens — while minimising how much citizens know about their governments.

Compared to Australia and, perhaps, the UK, the US government is significantly more asymmetrical; the de facto US data retention regime exposed last week, for instance, operated entirely in secret, whereas the UK and Australian governments have publicly debated data retention.

Indeed, the US government’s obsession with information asymmetry reached its ultimate extent last week when, in response to the leak about Verizon, McConnell’s successor as DNI, James R. Clapper, complained:

“The unauthorized disclosure of a top secret U.S. court document threatens potentially long-lasting and irreversible harm to our ability to identify and respond to the many threats facing our nation.”

In the US, the asymmetry extends not merely to the extent of spying, but the legal framework within which that spying is conducted, due to a combination of four things — a secret court called the Foreign Intelligence Surveillance Court, which adjudicates agency requests under FISA; the Obama administration’s reliance on secret legal opinions it uses to determine the extent of its powers; a willingness of Congress and congressional committees to keep secret what oversight it does have of spying; and a willingness on the part of intelligence authorities to lie to Congress. It’s only three months since DNI James Clapper told Congress the NSA did not collect information on “millions or hundreds of millions of Americans”.

This lack of oversight and accountability has a direct impact on the culture of spying. The NSA has long targeted Greenpeace as a security threat, for example. In 2008, a whistleblower revealed that NSA spies had eavesdropped on phone calls from American military personnel, journalists and NGO staff in the Middle East. This wasn’t in pursuit of terrorism, but simply to listen to intimate discussions between partners for titillation.

When government agencies have access to information and no fear of public accountability, mission creep, laziness and stupidity creep into its usage. So does politicisation. The Obama administration has launched a campaign on whistleblowers and investigative journalists using its secret powers of information-gathering, claiming it is about national security but in reality — as was demonstrated by the pursuit of Associated Press journalists’ phone records — it is about discouraging embarrassing media coverage.

The result is a multi-billion dollar industry employing hundreds, if not thousands, of companies spying on Americans and non-Americans alike, with no public oversight or accountability of any kind, using mass surveillance for political and economic goals unconnected with security, or simply to listen to soldiers’ phone s-x.

The only way to keep this vast corporate-state hybrid even remotely accountable, to start reversing information asymmetry, is via leaks.

From the first day of using the internet by pinging off an email I’ve assumed nothing travelling via it is private.

Frankly, the most remarkable thing about the Snowden revelations is that people are surprised.

This applies to governments even more than it does to private citizens. If the anti-privacy advocates really believe this, then why hide the electronic stalking?

Personally, I have things to hide. What computer games I play, what sports I do (or don’t do), the details of difficult family circumstances.

And given that millions have access to the information; it appears likely that secrets will not be kept.

I am curious though: Will the authorities persue with the same vigilance anyone caught leaking a individual’s private details?

It wasn’t enough those personnel were in the Middle East fighting their grubby little war for them – these desk-jockeys had to defile their privacy too, in the name of the freedom those being eavesdropped were risking their lives fighting for? The freedom to have their private lives hacked?

No wonder they want to shut the likes of Assange up “for good” – theirs?