Richard Farmer has a novel solution to the people smuggling problem. Plus other political views noted along the way.

Go and buy all the boats. There’s one thing that an evil people smuggler needs, and that’s a boat to put his cargo on for the voyage towards Australia. So if I were in charge of trying to prevent this cruel trade, the first thing I would do would be take over the Indonesian used boat market. A well-spent billion dollars would surely mop up the supply of the barely seaworthy craft currently being used to ferry desperate people to Christmas Island. Let capitalism work. Price the smugglers out of the market. Then spend another billion to provide legitimate better paying jobs as fishermen for the crews now risking their own lives to be smugglers. I look forward to the Institute of Public Affairs promoting the idea.

I know nothing. I live in Canberra, but the last time I went to Parliament House it was years ago to see a goddaughter get a prize. No, I lie. A Liberal MP I very much admire had me over for lunch in the parliamentary dining room last year to chat about old times, but Liberal Senator Eric Abetz was at the next table, which kind of put a dampener on things.

Anyway, what I am trying to say is that I am not the possessor of any inside information about what is really going on within the Labor Party caucus and its leadership shenanigans. I know absolutely nothing secret.  I have spoken to no one who might actually vote. My guess that they will find a way to restore Kevin Rudd to the leadership is based on nothing more than a belief that in the end that self-preservation will prevail.

The Crikey Indicator. A lot of intra-day fluctuations over the long weekend but little change, really. Labor still has the job ahead of it. 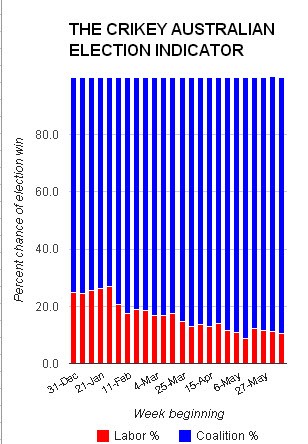 This thing called peer review. It sounds so impressive, doesn’t it? “Peer review”. This article must be taken as gospel truth because it has undergone a rigorous evaluation by other experts in the field.

And then a non-scientist muggins like me comes across an article on the blog of Mike the mad biologist with the title “Maybe We Should Give Up on Peer Review and Just Dump Everything” in ArXiv, where he draws draws our attention back to a study years ago of how accurate peer review actually is. “Let’s leave aside the complete breakdown of any plagarism detection systems. If I did the probability theory right, the rejection of previously accepted papers is indistinguishable from the editors deciding to randomly accept papers with a twenty percent acceptance rate (with an acceptance rate of 20%, the probability of rejecting 9/9 papers is 13%, and the probability of rejecting 8/9 is 30%). I suppose the good news is that the study is too underpowered to detect a rejection rate definitively greater than would be expected randomly.

“At this point, the only purpose of peer review that I can see is weeding out much of the utter bullshit (though even that fails occasionally).

“Related post: If you think this is bad, read this post which describes how, at multiple journals, one reviewer claimed the results were impossible while the other claimed that ‘we already knew this.’” He dreamed a dream of awards gone by

Good morning, early birds. The Morrison government has flagged three priorities for industrial relations reform, and the European Commission has unveiled their $1.2 trillion recovery package. It's the news you need to know, with Chris Woods.

This week in Side View: Australia's female empowerment score, an introduction to 'plassing', and it's that championship season in Europe.

A surging Sinn Féin teaches the left that success can be found in the community that a 'progressive nationalism' can provide.

Good idea in today’s Crikey re the boats

It would be interesting to find out the price differential for coming by land (to Indonesia) and boat to Australia against the cost of buying fake ID and just flying in from either Sri Lanka, India or Dubai. If the price point for “boat smuggling” could be pushed as high as the fake ID, fake tourism, and flight option then the boat problem is over.

Sure, it won’t stop the braying masses complaining but it might stop the drowning.