From nuts to Bolt (lovers), the small parties seeking your vote

WikiLeaks. Bullet trains. Marijuana. Aboriginal sovereignty. Who said this is a two-party system? Freelance writer David Donaldson takes a look at some of the smaller parties vying for your vote. 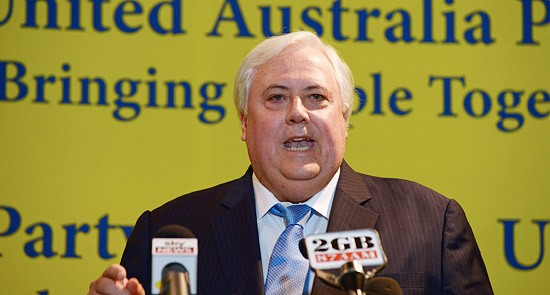 Australia looks on track to set a record for the number of political parties as we head towards the 2013 federal election.

Currently there are 36 groups listed on the Australian Electoral Commission’s register of political parties; 11 more submitted their applications before the May 13 deadline and are awaiting approval. Applications take around three months and must be approved before the electoral writs are issued in mid-August.

Although some of these may not ultimately obtain approval if they are found to have made mistakes in the application process, it seems likely that the previous peak of 40 registered parties in 1998 will be easily surpassed in this year’s election. This year’s potential total of 47 will be a huge jump from the 2010 election, when there were 25 groups on the ballot.

The first, and probably most electorally significant, group of minor parties entering the fray are those associated with already well-known public figures, like Clive Palmer’s new party. The Palmer United Party, originally known as the United Australia Party, had to be renamed due to problems with the Australian Electoral Commission (though Palmer took to Twitter to declare the problem was “legal roadblocks” from Prime Minister Julia Gillard etc).

The protectionist Katter’s Australian Party run by the man in the Akubra has a chance of doing well in the Queensland Senate race. The KAP might even pick up a couple of seats in addition to that of its namesake leader, who is expected to retain his seat of Kennedy. The party won just over 11.5% of primary votes in last year’s Queensland state election, winning two of the 76 seats it contested.

Independent Senator Nick Xenophon is applying to have the Nick Xenophon Group registered because he claims electoral processes are “stacked against independents”. The group would reportedly encourage its members to vote according to their consciences, providing a platform for independents rather than a set party line.

The WikiLeaks Party, currently awaiting registration by the AEC, is planning to run founder Julian Assange as a candidate for the Victorian Senate. In a poll by UMR Research, 26% of respondents answered that they would be “likely” to vote for Assange “if he were to run in your seat”, demonstrating both the power of suggestion in political polling and the potential for this party to sap some Senate primary votes from the Greens. Given that Assange probably won’t be emerging from the Ecuadorian embassy in London any time soon, the party would have to nominate a replacement to take his place if he won.

And of course there’s Pauline Hanson, who has reconciled with One Nation and will run for them for the NSW Senate. One Nation‘s share of the Senate vote plunged to 0.6% in 2010, following its peak of 9% in 1998.

Figureheads aside, there will be a host of other small parties vying for your vote. This includes small groups with single-issue agendas, including Bullet Train for Australia, the Bank Reform Party, the Voluntary Euthanasia Party, and the Non-Custodial Parents Party. The No Carbon Tax Climate Sceptics Party, whose name is certainly comprehensive, favours the writings of climate change deniers like Lord Christopher Monckton and Andrew Bolt.

Then there’s the recently re-registered Help End Marijuana Prohibition (HEMP) Party. Headquartered in Nimbin, the organisation was de-registered following a 2007 random audit of its membership. In 2004 HEMP suggested that Family First was “Australia’s Taliban”.

“The Pirate Party, a newly formed internet and information freedom movement, is hoping for a repeat of the success enjoyed by the Icelandic Pirates …”

On the religious Right, there is the Rise Up Australia Party, led by controversial pastor Danny Nalliah, who is known for having tried to exorcise evil spirits from Canberra, claiming Black Saturday was a result of legalised abortion in Victoria, and campaigning against Islam. Rise Up (whose leader was born in Sri Lanka) states that its aim is to “keep Australia Australian”.

Further to the Right is the anti-Asian and anti-Muslim Australia First Party, whose terribly formatted website includes links to the white supremacist British National Front and French Front National sites. Leader Jim Saleam advocates a return to White Australia policies and has been linked to neo-Nazi movements. The internet is rife with rumours that Saleam is of Lebanese origin, though he vehemently maintains his ancestry is Greek.

On the racist Right there’s the Australian Protectionist Party, which claims to be concerned about the implementation of sharia law in Australia.

A tour of the minor parties can’t disregard the bizarre Citizens Electoral Council, which is affiliated to the Lyndon LaRouche movement. They believe that climate change is a hoax (referring to Tim Flannery as a “witch doctor”), advocate the return to a gold-based currency system (because we are heading for a depression), and recently suggested the Boston bombings were orchestrated by the FBI. Despite running in almost every election for the past 20 years, they’ve never got above 2% of the vote.

The Australian Sex Party, a pro-sex, pro-business libertarian group, advocates legalised abortion, gay rights, voluntary euthanasia and the decriminalisation of drugs for recreational use. The creatively named group may prove important on Senate preferences among the small parties, having won between 5 and 8.4% in various Victorian byelections. Like the Secular Party, it has campaigned against the influence of religion in politics.

The Pirate Party, a newly formed internet and information freedom movement, is hoping for a repeat of the success enjoyed by the Icelandic Pirates, who recently garnered 5.1% of the vote and won three seats. Senator Online has no policies of its own other than to conduct online polling on each new law and have its Senators vote in accordance with the majority.

On the far Left are Trotskyist organisation the Socialist Equality Party and the professionally protesting Socialist Alliance. (Communist Alliance will not be running in this election, following a dismal result of only 0.06% in 2010.)

The newly minted Animal Justice Party will campaign against live exports, and other policies that will enrage farming types, such as restrictions on culling pest animals.

On the other side, the Outdoor Recreation Party is awaiting approval. Although its website headline announces it is “Smart Green, Not Extreme Green”, its desire to repeal national park status in some areas and undo “unjust and illogical gun laws” gives a clearer idea. Its official abbreviated party name, if approved, will be “Stop the Greens”.

On the anti-Green flank there is also the Shooters and Fishers Party. It finished seventh nationally in 2010, edging ahead of Australia’s original electoral splinter group, the Democratic Labor Party.

To cap it off there’s the Australian Sovereignty Party, which believes that lower taxes will lead to the elimination of government debt and fairer income distribution.

Australians, it seems, will be spoiled for choice come this election time.

The author is correct, judging the number of diverse parties we are “spoiled for choice”.

Perhaps we need another article explaining why voters have no sense of this.

Thanx for this. I try to conscientiously rank parties by preference but often have difficulty finding the policies of the micro right wing parties and independents. This will be most helpful for the micros. I’m getting to the stage of puting last anyone who doesn’t have their policies on line since they might even be worse than some of the parties described here.

At least Gavin, the micro parties can get a vote ahead of the majors. It will seem like an indulgence to put the ratbags, the family firsters, the hunters and gatherers, the DLP, the Katters, even the Palmers, ahead of the LNP and/or Labor. The real vote of course will be in the placement of that second last preference. And the $2 election funding will go to the party that gets the No.1 vote. So many options!

Socially progressive, “keep the bastards honest” and importantly – not representing the interests of just one small group (e.g all the protest groups)

I’m surprised the Liberal Democratic Party (LDP) and Australian Democrats weren’t mentioned – both are offering pretty compelling soft-to-hard liberal options for Australians sick of conservative, socialist and one-issue parties (which are the majority of options out there).