Privacy at fairfax ... a road to nowhere ...Rueben the Cavoodle shows his colours

Building roads without being asked. Last month the federal government chucked in $400 million to help get the M2 to F3 road corridor built in Sydney. Infrastructure NSW recommended the link back in October 2012 after Transurban very kindly offered an unsolicited proposal for such a link back in July 2012.

According to one Crikey reader, closer attention should be paid to the road plans:

“We are being told by the Australian media that the F3-M2 eight kilometre tunnel ‘link’ proposal has been approved to the final stage of the NSW government’s unsolicited proposals process. The eight kilometre tunnel is a political decision, it is definitely NOT an engineering or planning decision. Any chance that anyone in the Australian media will write the other side of the story instead of regurgitating media releases from the big end of Sydney town?”

Do you know more about the unsolicited proposals process? Or insider knowledge on the F3-M2 proposal? Get in touch (and yes, you can stay anonymous) …

Check here to give away all your privacy to us. Yesterday Tips pointed out Fairfax’s delightful emails to its wannabe digital subscribers, which were addressed “Dear Null”. It seems that wasn’t the only teething problem as part of the promotion, with another subscriber revealing how Fairfax’s lax privacy policy curbed his enthusiasm:

“I considered activating digital access which Fairfax’s email assured me only required my subscriber number, or at least that is how I interpreted ‘All you need is your subscriber number’. I realise now that Fairfax demands significantly more.

“Since I don’t normally load remote content in my emails, I followed their instructions to view the email on the web. Curiously, the email was addressed to me [Richard], but the web version chopped off my name — I didn’t even get a ‘Dear Null’.

“Naturally the registration process trolled an email address out of me before moving to a second page where they asked for personal details. I was suspicious about why I ‘needed’ to give them my details so clicked on the link. Turns out the need was bogus — Fairfax wanted the data to give me a “personalised experience” [against my wishes].

“At the bottom of the page was a checkbox for me to acknowledge I had read and agreed to the Fairfax Conditions of Use including Privacy Policy. Having got tired of having my privacy abused by unscrupulous commercial operators, I read the Privacy Policy.

“I wasn’t happy with many of the items listed under ‘How we use it’ but the killer was the excessive freedom Fairfax wanted under ‘How we disclose it’ — basically my consent for them to hand over my details to anybody who paid them money for it.

“There wasn’t a checkbox for me to indicate I rejected their Privacy Policy, so I chose to walk away rather than expose myself to yet more spam.”

What, you don’t want more spam? Surprising. If you’re attempting to become a Fairfax digital subscriber and are encountering problems along the way — or want to tell us why you won’t be signing up for a sub — drop us a line (privacy guaranteed) …

“Your tipster yesterday tearing into Laurie Ferguson has a hide. The ‘young, energetic’ campaigner Damien Ogden your tipster references, was walloped 130 votes to 11 by Ferguson in a rank and file ballot after putting two years of his life into building local support. Ogden’s Albo faction also tried hard to stop the ballot even taking place. Most rank and file members obviously didn’t want the ‘energetic’ Ogden and his political career has been finished.”

Ogden worked on Obama’s 2008 presidential campaign. He’s also 34, so we’re not going to declare his political career over quite yet.

Vote one Reuben the Cavoodle. It seems the Lodge was divided for this week’s State of Origin game. 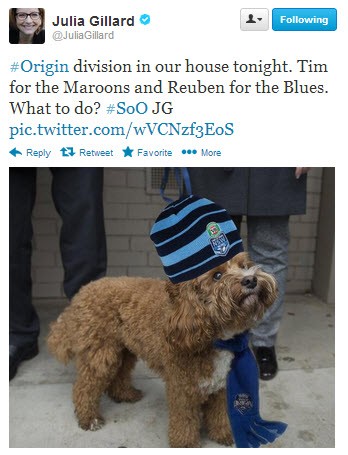 No word on who had the PM’s support. Any other well-known political or powerful homes split along football lines? Send us your tips (cute puppy photos optional but encouraged) …

I hope Barnaby supported NSW. Otherwise people in New England might think he was an outsider or something.