Kevin07 is back! Maybe it's not too late for his Labor Party colleagues to put him back in charge and give the party a prayer of winning September's election? Plus other political views noted along the way.

It’s not too late. Any Labor caucus member who watched Kevin Rudd on the ABC’s 7.30 last night would surely realise what a terrible mistake they made by not re-installing him as their leader. 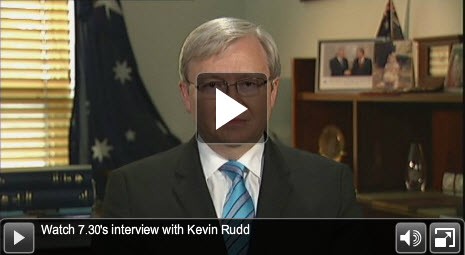 It was back to the calmly confident Kevin Rudd who led the party to victory in 2007. Members — it is never too late to at least try and save your seat.

An opportunity missed. A sensitive Prime Minister with her concern about the welfare of the man brutally bashed in Sydney’s Rocks at the weekend:

Yet silence about the one punch can kill message after this one seen by millions on television: 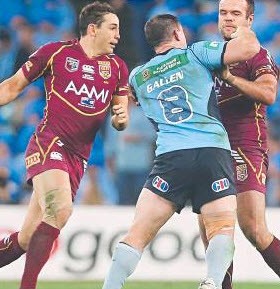 Self-serving claptrap from Ben Fordham. And writing of State of Origin: a bloke can’t even go to the footy these days and make a flippant remark over a social beer without some smart alec beating up the comment. 2GB’s afternoon shock-jock Ben Fordham on Twitter yesterday morning: 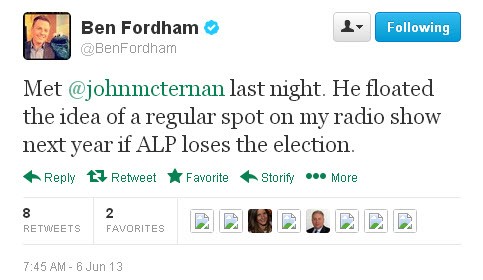 There once was a time when a political person could chat privately with a journalist at a non-political event without having his words made public. Alas, it seems, no more. And to make matters worse you have to put up with self-serving claptrap like Fordham trying to justify his rotten ethics on his afternoon radio program.

Plucked from the correspondence. From: Paul Johanson; Subject: Re: Meet your first cousin

So… Was anyone else disturbed by the manic expression on the face of that 50 million year old primate? I can hear it saying “I haz a grasshopper!” or “Fear me, other genera!” or even “Derp!”

OK, I’m going to have to Lolcat it now… 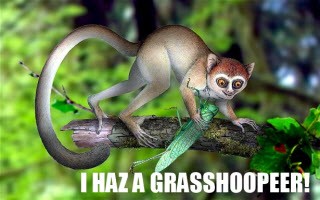 Leak for a healthier democracy

It appears the ALP Caucus majority prefer Tony Abbott as PM over their colleague, Rudd. They would torch the whole party rather than re-instate their most popular leader ever.

If they’re that obstinate in failing to acknowledge – and respond to – the will of the electorate, they deserve a September defeat.

Personally I don’t think either Rudd or Gillard have the necessary charisma to lead the party – they’re both good “point men”, they just don’t know their place – and the more outstanding talent the party can attract are knee-capped lest they show up the established cabal for the underachieving, self-serving free-loaders they are.

i support klewso’s comments about Labor.

But disagree about public Rudd — can’t anyone else see through him? He was not the most popular PM ever, what nonsense. He was a lip-licking, wax-munching psychopath and should just go away from politics now.

Labor will not do any better if he’s re-installed. Australians just don’t like them.