Facebook censorship ... an ALL CAPS missive from Laurie Ferguson ... the battle for Batman

I’m hatin’ it. Yesterday Tips covered the case of the disappearing comments critical of McDonald’s on Facebook. It seems the issue is continuing, with a member of the No Maccas in the Hills group updating Tips with the latest after the group’s Facebook posts criticising or questioning McDonald’s actions were removed due to supposed “hateful” content:

“We have since had our legal team look at the post and not only does it contain no hateful comment we also believe that it in no way contravenes Facebook’s terms and conditions. We have asked Facebook to explain the situation but at this point we had heard nothing. Then yesterday we put up posts relating to an international day of action against McDonald’s, these too were quickly taken down.

“One of our administrators got a message late this afternoon that she would be blocked if she continued to post content that was abusive. What she in fact posted was a call to our supporters asking them to post comments on both McDonalds Australian Facebook site and the US site to coincide with the international day of action. In a reply to Facebook she pointed out that both McDonalds’ sites are commercial operations that ask for customer feedback via FB posts, all we were suggesting was for our supporters to use that mechanism to tell McDonald’s they are not welcome in Tecoma. As yet she has not heard back from Facebook and is unable to post any content.” 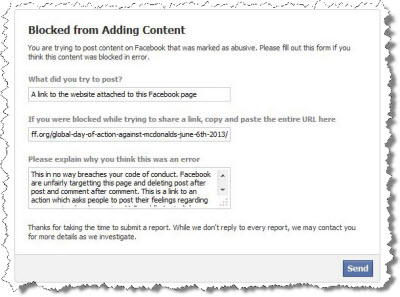 Don’t MESS with LAURIE. Today good ole Laurie Ferguson popped up in the news thanks to a fiery email exchange with one of his constituents over asylum seekers. It seems this isn’t the first time Laurie has engaged in email warfare over the Labor Party’s treatment of asylum seekers, with one Crikey reader sending us this ripper response from the backbencher back in 2011 after the Malaysian Solution was officially sunk (click through to read the whole exchange).

As the tipster told Crikey:

“Bear in mind, this is the guy who during a preselection battle with a young, energetic campaigner (Damien Ogden, founder of Campaign Action) said that his vision of a good local member was to sit at his office and wait for people to come in or write to him rather than getting out at train stations and making an effort to engage with people directly.

“Seems to me that if you write or drop by his office you’re more likely to get an incoherent spray than any real attempt at representation. Most rank and file members of the ALP would like to see dud wannabes like Laurie pack up and go home. Perhaps he can retire to wherever parachuted N.40 candidates go to live out their days and spend their indexed pensions. He’ll be in good company there with his brother Marrn.”

The battle for Batman. Speaking of the other Ferguson, the preselection battle for his seat of Batman continues to simmer along (yes, the one that David Feeney has put his faceless hand up for). Tim Singh Laurence, a candidate for Labor preselection in Batman and the only ALP member who can even vote for himself in the election since “the others either live outside the area or are not ALP branch members with voting rights”, sent out this pamphlet to Batman ALP members noting how he’d “clean up” the area from “faceless faction bosses”, with dodgy photoshopped broom graphic included: Null Fairfax readers. To help roll out its digital subscriptions for local readers (full details of which have been made available on Fairfax sites today), Fairfax emailed its current subscribers to help drum up a bit of support. One small problem, though: the email insulted its readers.

As one Sydney Morning Herald reader told Tips: “You would think that it’s not too hard to get this right, but I received this email today from Fairfax as a ‘valued subscriber’ addressed to ‘Dear null’. Even most small businesses using email marketing programs know if you don’t know the name of the person you’re sending the email to then don’t include a salutation field. D’oh.” We’ll be watching closely as Fairfax implements its digital subscriptions. How painfree will the process be? If you notice any stuff-ups, small or otherwise, please send them our way.

If Feeney becomes Batman, who will be Robin?

Fairfax readers, don’t do the pay-wall, the Australian version of the Guardian is free; and… a better product. It actually contains world news as well.

Null Fairfax readers, no pay-wall at the on-line Guardian. Better product too.

So Facebook protects its corporate customers in preference to little nobody customers with attitude. D’oh – they invented democracy to deal that. History tells you all about it.