With only 100 days to go until the election, we take a look at the men and women who'll take on ministerial responsibilities if the Coalition wins. Who are the duds, who are the stars, and who is the has-been that never was? 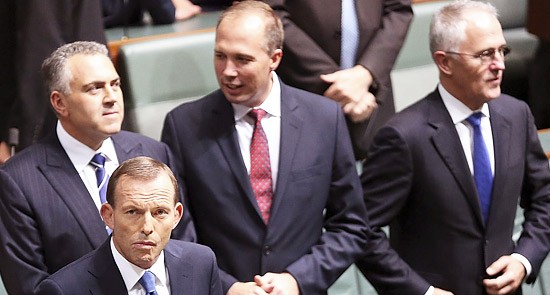 With just 100 days to go until September 14 and Opposition Leader Tony Abbott resolute that his shadow ministry will translate seamlessly into government with no changes, it’s worth looking over his frontbench to see what the first Abbott ministry will look like.

Assessment is complicated because of the way Abbott has run opposition, focusing relentlessly on the government and personally leading the charge on the carbon price. The Coalition’s small-target strategy — by no means innovative when it comes to parties in opposition — has meant few ministers have had a chance to shine, and the hung Parliament has also meant a far greater emphasis on parliamentary tactics — Christopher Pyne is probably the best-known manager of opposition business in history. But let’s go through them.

Joe Hockey (Treasurer): The bloke once derided as a “buffoon” in business circles has come into his own; to use former PM John Howard’s phrase, the times have suited him. He’s struggled on macroeconomic issues, given the strong performance of the economy under Labor’s management, but he’s seized on fiscal policy not merely to savage Labor on its retreat from its surplus commitment but to challenge internal opponents who want to continue the big-spending ways of the Howard government. He’s presided over an extended shadow expenditure review committee process to cut spending and keep shadow ministers in line and publicly articulated his concerns about middle-class welfare, something colleagues who share his views have been unwilling to do. He’s the figure economic hardheads will look to for sensible economic management, not Abbott.

Scott Morrison (Immigration): Grubby and amoral he may be, but Scott “typhoid” Morrison has ruthlessly and effectively exploited the asylum seeker issue, readily pushing the envelope in demonising refugees and playing a key role in helping build the Coalition’s enormous lead over the government. He has no ministerial experience, however, and will find life running a large portfolio like immigration decidedly tougher than bagging it relentlessly from the outside.

Malcolm Turnbull (Broadband): Far from demolishing the NBN, as he was charged by Abbott with doing, Turnbull instead has dragged the Liberals to embrace an NBN-like vision of a national broadband network dependent on the ancient copper network for the last leg for 70% of premises, with punters required to pay for the full deal. Make no mistake, exorcising the ghost of Nick Minchin from Coalition telecommunications policy is an impressive achievement, but how Turnbull handles a portfolio where, traditionally, the big reform decisions are made by the PMO, will be fascinating to watch.

Kevin Andrews (Human Services): A has-been who never was, Andrews’ career as a Howard government minister was a debacle culminating in his shameful handling of the Muhamed Haneef case, and his period as shadow minister has been unmarked by any achievements except railing against gambling reform. Along with Bronwyn Bishop, the most obvious example of dead wood that Abbott won’t shift for fear of destabilising the party.

George Brandis (Attorney-General): With repeated examples of poor judgment, including attempts to intervene in the Craig Thomson case and hiding behind parliamentary privilege to claim the Prime Minister was a “crook”, there are real questions over Brandis’ capacity and temperament to fulfill the requirements of the sensitive role of attorney-general, especially given his hypertrophied sense of his own legal wisdom. Remember, he’ll be in charge of both the Australian Federal Police and ASIO.

Peter Dutton (Health): With health a major issue in this term of government, Dutton — once bizarrely touted as a future leader — has been missing in action most of the time and has zero profile (“who’s this?” Labor MPs call on the rare occasions he appears at the dispatch box); parliamentary secretary Andrew Southcott has higher profile and more interesting things to say. Dutton also has limited ministerial experience, but will be handed the vast, complex and high-profile health and ageing portfolio, its billions of dollars in funding and vast list of stakeholders. Watch health for the first big bungles of an Abbott government.

David Johnston (Defence): Shaping up as the Joel Fitzgibbon of the Coalition line-up — not the latter-day “colour and movement” Fitzgibbon but the colourless bloke lost in Defence under Kevin Rudd. Even key military stakeholders are wholly underwhelmed with Johnston, when Defence continues to need a strong hand on a number of fronts.

Julie Bishop (Foreign Affairs): Bishop remains well-regarded within the party and is a force behind the scenes, but right from her brief time as shadow treasurer she has repeatedly demonstrated a tendency to stumble in her portfolio; the debacle of her claim that the Indonesian government had secretly agreed to co-operate on towing back asylum seeker boats is only the latest in a long series of Bishop slip-ups. She also had to be subbed off when Abbott handed her responsibility for pursuing the Prime Minister over the AWU smear last year, and she tripped over herself on her dealings with Ralph Blewitt.

Christopher Pyne (Education): The niggle merchant of the opposition, Pyne has been a success as manager of opposition business, and his battle with Anthony Albanese over the term of this Parliament has been fascinating to watch, even though Albanese has put together an impressive record of getting legislation through a hung Parliament and rarely losing key votes. On the key issue of education, however, Pyne has been far less effective in prosecuting the difficult cause of ignoring reforms in favour of the current, broken funding system; indeed, most voters would be hard pressed to identify Pyne as the education shadow.

Greg Hunt (Climate Action): Watching Hunt struggle to justify “Soil Magic” has been one of the more tragi-comic aspects of this term of Parliament; as is painfully clear to even his colleagues, the policy is incoherent, grossly underfunded and scientifically unworkable. Hunt has slowly inched away from the original conception of the policy as mostly composed of burying carbon on farms and instead now advertises it as a “market-based” auction of funding for carbon abatement initiatives. While he tries to implement “Soil Magic” — first step, a white paper — he’ll also have to fight off party Neanderthals who want to abandon the increasingly successful Renewable Energy Target, something he has strongly backed.

Eric Abetz (Employment and Workplace Relations): Being IR minister in an Abbott government will be about as much fun as being foreign minister for Kevin Rudd. Abetz has had to stay resolutely silent for most of this term before joining with Abbott to unveil a cautious IR reform platform that deeply pains many colleagues and business supporters. Still, Abetz, in curbing his natural instincts, has served his leader loyally.

Sophie Mirabella (Industry): Mirabella is a bit like current Communications Minister Stephen Conroy in loving a stoush, but unfortunately lacks his policy expertise. She’ll be handed the critical and very large industry portfolio at a time when there’s growing pressure to cut business welfare. Another area where bungles may ensue due to lack of ministerial experience.

Andrew Robb (Finance): While a key figure in the opposition’s internal policy process, the full fruits of which won’t be revealed until the election campaign, Robb has been eclipsed in the economic stakes by Hockey, whose position he once sought.

Warren Truss (Deputy PM, Infrastructure and Transport): Genial, pleasant and well-versed in his portfolio area, Truss is nonetheless an underwhelming political presence. There’s a strong chance he’ll get lucky and see Barnaby Joyce hit the fence in New England, removing a future leadership rival, but that will mean dealing with the traditional Nat problem of differentiating themselves from the Liberals will fall even more on his shoulders, and he hasn’t shown much capacity to manage it.

Mentioned in dispatches Sussan Ley has been quietly effective on childcare and will make an excellent minister; inexperienced attack poodle Connie Fierravanti-Wells will have carriage of aged care, where major reforms are underway and there is huge potential for bungles; who is John Cobb?

The word around the docks in Surabaya is that there will be a marked increase in boat people when the coalition gets in just to get up Scott Morrisons nose.

There’s a lesson to be learnt from the entity known as the body corporate (or ‘owners corporation’ in some states) ie: the people who gripe and criticise the most usually flounder and are ineffective when on the committee or, heaven forbid, become Chair.

That’s a heavy dud/performer ratio you’ve identified, BK.
I hope you stand ready to recieve the cries of bias from the usual suspects.
Rudd’s first cabinet was probably equally inexperienced. Will the blunders of a Liberal government be as gleefully beaten-up by the press as Labor howlers like ‘pink batts’?

@mattsui. Will the blunders be gleefully beaten up… I don’t think so; they’ll still just blame Julia Gillard or Wayne Swan