So after all these months NSW Labor finally expels Eddie Obeid and Ian Macdonald. They are a speedy lot in Sussex Street.

The good economic news continues. The Australian dollar hit a 20-month low this morning — 0.9509 to the US dollar. Who knows, Mafeking might soon be relieved. (Apologies for that non-financial reference but I have almost finished reading Jan Morris’ three volume history of the British empire.)

Well and truly bolted. So after all these months NSW Labor finally expels Eddie Obeid and Ian Macdonald. They are a speedy lot in Sussex Street.

We told you so. Interesting the different ways that soon-to-be-departed Labor MPs are making public their “we-told-you-so’s”. Alan Griffin and Daryl Melham packing up the office for evacuation when there are two more sitting weeks to come smacks of a last minute attempt to get their colleagues to listen to Rod Cameron — see next item — and make a last minute return to Kevvie.

A quote of the day from a normally cautious man.

“The majority of the modern Labor Party — the caucus, the leadership, the machine and, importantly, the union bosses who now dictate policy — has totally lost the plot. When they reaffirmed Julia Gillard’s leadership, they really were turkeys voting for Christmas — and what a Christmas it will be. It will be a total wipeout in the outer suburbs of all the capital cities and the regional and rural areas to boot.”

No further punishment needed. We could probably do away with courts imposing fines these days. Surely the cost of having lawyers represent you is penalty enough. I mean how shocking is this story: former House of Representatives speaker Peter Slipper is being sued over hundreds of thousands of dollars in unpaid legal fees. And this is just the cost of a s-xual harassment case that was dismissed!

Chunky Bits goes multi-media. Courtesy of a friend of a Chunky Bits reader, our own exclusive coverage from Istanbul: 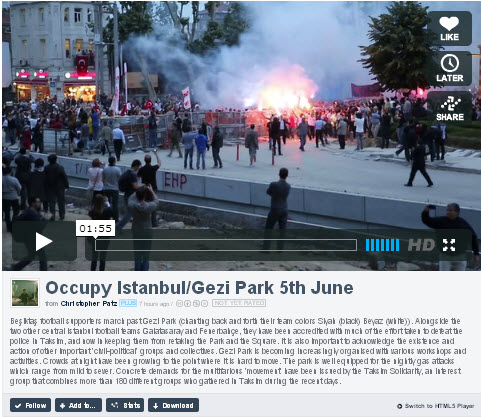 Meet your first cousin. London’s Daily Telegraph brings us news of the mouse-sized fossil of a tiny primate that lived 55 million years ago, discovered in China, that scientists believe is the earliest known cousin of humans yet to be found. I can think of a relative or two of mine that …