Rupert Murdoch tried to convince Sydney investors yesterday not to dump their stock in the new News Corp. But with falling revenues and high costs, buying into the print assets is probably not a smart business move. 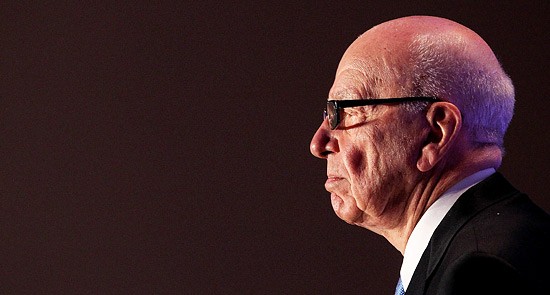 There used to be an adage in Australian business that you never bought something from Kerry Packer because he would have grabbed all the value — just ask Alan Bond. And you can say the same about James Packer, certainly in TV, but not in casinos, where the vendors saw him coming.

So what can we saw about Rupert Murdoch and his current sales campaign? Is it a case of caveat emptor, or a case of avoid at all cost the shares in new News Corp? Be a cashed-up schmuck and say, “sure, Mr Murdoch, great idea, great company, great future”? Or look at what he is selling and what he is keeping in the other half of News and ask why? The new News Corp has negligible growth prospects (and yet there he was arguing that the company would be a “growth stock”!). The half with the growth prospects is 21st Century Fox. So where do you think all the hard-headed fund managers want to be?

In the words of a Sydney fund manager at lunch this week, “Rupert Murdoch — we don’t have any News Corp shares, never have. I regard him as a ‘sovereign risk'”. In other words, lay down and avoid the new News Corp shares at all cost, despite the strenuous attempts to sell the future of the new News Corp in New York last week and in Sydney yesterday. The briefings are ahead of the vote next Tuesday night, our time, in New York, at which the holders of the 330 million or so voting shares in the company will decide on the split.

The vote is a forgone conclusion — not because the Murdoch clan controls the company with 39% of the voting shares, but because big fund managers in the US want to be shot of the under-performing analogue print assets (and the weak Australian pay TV and internet assets as well) and invest in the content business in 21st Century Fox — film, TV distribution and content, cable TV in the US, Asia, UK and Europe.

“Is it a case of caveat emptor, or a case of avoid at all cost the shares in new News Corp? Be a cashed-up schmuck and say, ‘sure, Mr Murdoch, great idea, great company, great future’?”

That’s the brutal reality of the split and underlines the futility of the sales pitch to investors to keep their holdings in new News Corp and not dump them into the market and reinvest in 21st Century Fox. It’s also why there will be a half-a-billion-dollar share buyback to support the shares in the months after the split on June 28 (to be financed by bank debt, not the company’s $US2.6 billion cash pile, because it is more tax-effective to do so).

Murdoch has succeeded when he has started a business from scratch, or taken one that has promise and thrown money at it — BSkyB in the UK, Sky Italia, 21st Century Fox, Fox TV and Fox Network News and Star are prime examples, but they are not in the new News Corp. They are in 21st Century Fox. His newspaper and internet dealings have been costly failures or lessons he never learns. MySpace (and the $US4 billion or more in the tech boom before 2001), and the purchase of Dow Jones, which is now worth a third of the $US5.7 billion he paid for it in 2007. Then there was the small, failed experiment of The Daily last year — $US20 million or so, but it did confirm that Murdoch et al struggle with the internet-based news model, which is supposed to be the saviour for the new News Corp papers around the world (it is helping The Wall Street Journal, it has to be pointed out).

From what has appeared in the media this morning (especially The AFR and The Australian), it was a second presentation in a week (after New York) to shed light on the financial details needed to value the company. That’s because the basic financials are weak — falling revenues with ad and sales revenues weak  and costs high. Foxtel is stuck in a high-debt, low-growth rut, as is Fox Sports Australia. The internet businesses have some growth potential, but nowhere near enough to offset the continuing slide in newspapers and the weakness in book publishing.

Take this effort in the business pages of The Australian this morning. Incredibly this tosh is behind the paper’s paywall, but here’s a taste:

“Rupert Murdoch’s reborn News Corporation will inherit the ‘Murdochian momentum’ that made the original company such a success story, the executive who will lead the new News Corp has told key investors in a detailed briefing ahead of its launch this month.

“Robert Thomson, a close confidant of Mr Murdoch who has been chosen by the News Corporation chairman as the new company’s chief executive when it launches on June 28, acknowledged the challenges for the company, particularly in its newspaper divisions, but also said ‘the new News will inherit that sensibility and will strive to build longer-term success’.”

And not an acknowledgement anywhere this morning that the Australian, UK and US papers have been written down in value by $US7 billion (is that what that “Murdochian momentum” is?) since 2008 — including a minimum of $US1.2 billion in Australia (taking it to well over $US3.2 billion in two years). Thomson’s comments sounded, in print, like a long speech at the recent Chinese Parliament.

It is a case of ‘Trust me, I’m Rupert Murdoch”. And then there’s “the poison pill” the new company has adopted to prevent a stock market raid. It will be in place for at least a year and will enable the board to issue more shares at a very cheap price if someone raids the company and grabs a 15% or larger stake (as US cable TV magnate, John Malone did the parent back in 2004-5).

Glen Dyer, spot on! You would get better returns from a mean spirited poker machine than you would from investing in a Murdoch reincarnation of his forever loss making print media assets in Australia. Pay-walls, schmay-walls with Murdochian print media, well….comparative to all News Ltd media, the Guardian can be accessed on-line for no cost; and guess what…it’s a far superior product to the crappy stuff that Kim Williams peddles as the national newspaper the Australian. In our library you seldom see people reading that rag and others from the News Ltd stable.

Mr Denmore on his blog put it so explicitly well: …’to let a US citizen who presides over an organisation that hacks phones, promotes illegal wars and trashes corporate governance…’ Some savvy investors would wonder why that same US citizen will now promote and try to sell yet again, his Australian crappy media assets. My question would you even buy a car from this man?

So when are they going to go broke?

The “industrial strength sociopath” reckons he can use his PR media empire to hector, bully and blackmail governments (or else he’ll withhold positive publicity and unfurl the negative, from his market-place majority share mast-heads), into governing to suit him and his sponsors – like he runs his company from such a minority share.
Sod the greater voting public, who don’t know what’s good for them, like he does!
As some immoral pirate, carrying on his trade under a “democracy” flag of convenience, he reckons he can virtually rule any salty domain he likes, the way he does his own ship, by disproportionate proxy.