Pauline Hanson is trying her hand at another political comeback. Freelance writer Sally Whyte looks back through history at Australian politicians who came in from the political wilderness to electoral glory. 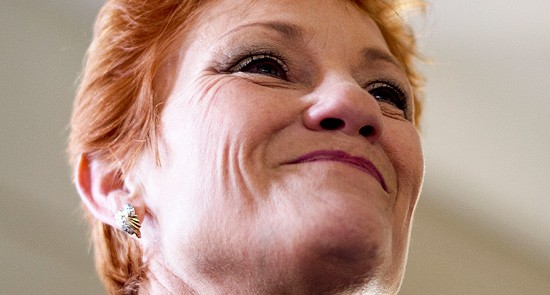 The irrepressible Pauline Hanson announced on Monday she would be running for a New South Wales Senate seat at the September election, for the One Nation party. It’s not the first time Hanson has tried to get back into some form of Parliament since losing the federal seat of Oxley in 1998 — even fake photos and a stint in jail haven’t deterred the ex-Queenslander. As either an independent, a One Nation candidate or a Pauline’s United Australia Party candidate, Hanson has run and lost five times in federal, Queensland and NSW elections since losing her seat.

Most of the pundits think this serial election-loser can’t do it this time around either. But Hanson’s attempted come-back put Crikey in mind of some of the great political renaissances, in which pollies have come back from the dead to electoral glory. Here are some of the best …

John Howard named his autobiography Lazurus Rising, and he emerged from many political dark caves before becoming prime minister in 1996. Howard survived losing three ballots for the leadership of the Liberal Party (to Andrew Peacock in 1983 and 1989, and to John Hewson in 1993) and one election as leader of the Liberals (to Bob Hawke in 1987) before finally getting the top job. And once he got to the top, he stayed there.

Robert Menzies’ comeback was perhaps one of the biggest. He served his first term as prime minister as leader of the United Australia Party from 1939 to 1941, but was forced to quit by his own party. After years both on the opposition backbench and as opposition leader, he was re-elected in 1949, this time as leader of the Liberal Party, and he served until 1966, making him Australia’s longest-serving prime minister.

Both Menzies and Andrew Fisher served as PM twice in their careers, and it took Alfred Deakin three shots at the prime ministership; he passed no legislation in his first term from 1903 to 1904.

John Curtin might never have got the top job if he hadn’t promised to give up alcohol. He served just one term as the member for Fremantle before losing it in 1931. After winning the seat back in 1935 he had to promise the Labor Party he would curb his drinking before becoming opposition leader in 1936 and prime minister in 1941.

More recently, after 10 years as NSW premier and six years out of the game, Bob Carr slotted into the casual vacancy left in the Senate by Mark Arbib and succeeded Kevin Rudd as Foreign Affairs Minister.

Victorian premiers also seem to make a habit of finding a way back from the political wilderness. John Brumby managed to become premier in 2007 after Steve Bracks retired. It had been a long time in waiting for Brumby, who had served as the federal member for Bendigo from 1983 to 1990 and as leader for the opposition in Victoria from 1993 to 1999 (before being rolled by Bracks).

On the other side of politics, Jeff Kennett served as leader of the Liberals in opposition from 1982 until 1989. He survived three leadership challenges in the mid-’80s, and his reputation was damaged by a leaked phone conversation with Andrew Peacock. Kennett organised a challenge to his successor Alan Brown in 1991, and followed it up with a landslide victory at the polls the next year.

Only three months ago, Victorians were once again arguing about how to pronounce “Napthine” when the Liberal Party deposed Ted Baillieu and installed Denis Napthine as Premier. Napthine had previously led the Liberals in opposition from 1999 to 2002, before losing leadership of the party to Robert Doyle. Now he’s back.

Of course, the Americans have the most interesting comebacks. Here’s a stand-out: South Carolina governor Mark Sanford was forced to quit as chairman of the Republican Governors Association in 2009 after it was discovered that he was visiting his mistress in Argentina, not hiking the Appalachian Trail, as his spokesperson had claimed. He was sworn in to the House of Representatives last month, and is now married to his former mistress.

If this story puts you in mind of a great political comeback, post your thoughts in the comment thread online.

Nick Greiner who was defeated in the normally safe Liberal seat of Willoughby in the ’78 Wranslide by the wonderfully named Eddie Britt (who sat in the NSW Parliament in the ALP interest for just three years) came back as member for Ku-ring-gai a couple of years later after white anting John Madison into retirement.

John Howard ran for a state seat in 1968 but the prescient electors of Drummoyne denied us the opportunity of seeing JWH in action with Robin Askin whose government was easily returned (with the help of a gerrymander). He then turned his sights on the federal arena and the rest is history.

Oh dear, I’d almost forgotten Mark Arbib had been a senator and regret that the author has reminded us.

But, I thought Clive Palmer’s party was called PUP?

I can’t believe that you have written this story.

All Pauline wants is the $$$ that come from each she picks up.

Regarding great political comebacks, I think special mention should go to William (Bill) Yates (15 September 1921 – 18 April 2010). Yates was a member of the House of Commons (Conservative Party) from 1955 to 1966. He subsequently left the Conservative Party in 1967 over a dispute over the Arab-Israeli War and immigrated to Australia. In 1975 he was elected as a Liberal Member of the House of representatives for the Seat of Holt. He was defeated by Michael Duffy in 1980 and went on to become Australia’s Administrator of Christmas Island from 1982-83. In 2003 at 82, Yates earned a Phd from University of Melbourne writing about British foreign policy during the Suez crisis.