Just as a Liberal-National coalition government prepares to scrap carbon pricing in Australia, the World Bank comes out with a comprehensive report on the world popularity of carbon pricing schemes.

A softer sounding Tony. I detect a much quieter tone of voice from Opposition Leader Tony Abbott. A lot of the old belligerence is gone. I expect the new approach to result in a further improvement to his approval ratings.

The bank mapped the countries having, or planning, some form of cap-and-trade policy: 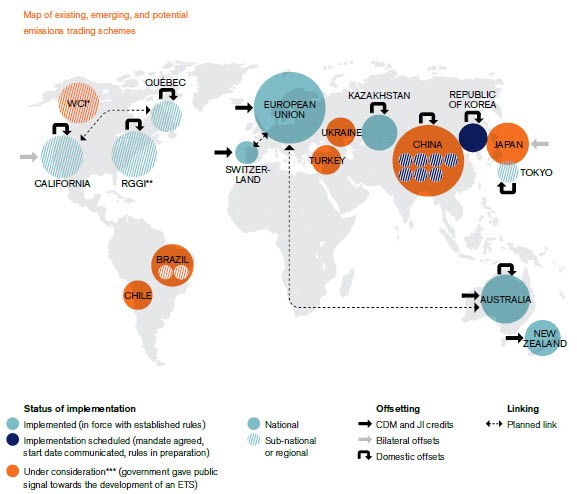 The bank concludes in its report summary:

“Climate change requires urgent action at scale. Concerted action to mitigate climate change is as urgent as ever. Global GHG emissions continue to rise, and the window to avert dangerous climate change is closing fast. The international community has agreed to limit the increase in average global temperature to 2 degrees Celsius (°C) above pre-industrial levels. The current level of action puts us on a pathway towards a 3.5–4°C warmer world by the end of this century. Such a scenario would have a devastating impact on the climate and would threaten our current economic model with unprecedented and unpredictable impacts on human life and ecosystems in the long term. The main challenge for the international community will be to find a balance between the emerging plethora of carbon pricing schemes, which allow progress on carbon pricing initiatives at the national level, and global incentives to reduce emissions, which would allow the world to remain below a 2°C limit. Activities at a larger scale are needed for a truly transformational carbon market — one that can emerge from fragmented initiatives. The challenge then will be to develop these initiatives through linking, potentially reshaping the global carbon map.”

Where they campaign doesn’t matter. A suggestion in The Australian this morning that Labor campaign strategists are planning to confine campaigning by the Prime Minister to marginal seats that are almost certain to be lost. The rationale is meant to be that Julia Gillard will do less damage there than she would if allowed to roam in electorates with higher margins.

Perhaps that is an accurate report of what some apparatchik or other told the paper but it doesn’t make much sense to me. My experience of campaigning suggests that a leader would be better off staying in one location rather than buzzing around the country like a mad thing. In the final weeks the picture on the television screen is what counts rather than where the picture was taken. With regards to the PM campaigning in marginal seats, the suggestion in the Australian also goes against the commonly stated belief that people who have met her tend to like her a lot more than those who haven’t.