Police removed works by well-known collage artist Paul Yore’s Everything is Fucked installation at a St Kilda gallery in Melbourne on the weekend, after claims the art amounted to child pornography. No charges have yet been laid, although Yore was interviewed by Victoria Police on Monday and released pending a court summons. If charged and found guilty, he could face up to 10 years in prison for producing and possessing child pornography. But did the tip-off to police come from someone with an agenda?

The motivation behind the Victorian Police raid on the Linden Centre for Contemporary Arts is becoming clearer with more research. The Victorian Police are not in the habit of visiting art galleries looking for child pornography, but they are too easily manipulated to do just that by conservative wannabe politicians.

On May 28, Adrian Jackson, who had ties with the Liberal Party, and Chris Spillane, a Liberal Party candidate for the local council, were at Port Phillip City Council meeting along with councillor Andrew Bond. Bond, an independent and a former church youth group leader, has called the exhibition “obscene” and compared it to hardcore pornography.

Spillane and Jackson are both controversial local figures, with Spillane previously branding multiculturalism a “waste of money” and “failed dogma” and  Jackson an ex-Australian Army wannabe politician who has stood for office as an independent candidate and runs a local B&B that bans Israeli guests. Given their backgrounds, Jackson and Spillane don’t appear to be the usual gallery visitors.

These three people were the only people complaining about the exhibition in an article in local newspaper The Leader. In council’s public question time Spillane’s agenda is made clear in the minutes of the meeting:

“Chris Spillane asked about a current art exhibition at the Linden Centre for Contemporary Arts in St Kilda. He stated that while he hasn’t seen the exhibition himself, from what he has heard about the exhibition it is offensive and pornographic in nature. He suggested that the exhibition should be shut down or at the very least there should be more appropriate signage warning of the contents, age restrictions in place, and this section of the gallery should be cordoned off. He asked, as sponsors of the gallery, what action the Council intends to take?

“Mayor Amanda Stevens responded that the gallery is run by an independent board and that there is already appropriate signing regarding the exhibition in question in place.”

Meanwhile, Jackson’s agenda become apparent in a comment that he appears to have made online at The Leader. Posted at 7:31pm on June 2, it states:

“Mission accomplished — the kiddy art exhibition is now closed. Next step is getting the Linden Gallery to be self funding instead of behaving like a parasite on ratepayers. Currently $100,000 PA is spent by Port Phillip Council on maintenance and equipment in the Linden which has been a ratepayer owned building for the last 25 years or so. This money does not appear in the Linden’s annual Statement of Affairs (see their website) as far as I can see but what is included is about $250,000 PA in ratepayer funds in ‘operating cost’. All this for six or seven exhibitions per year involving about six artists per exhibition. The large post card exhibition could be moved to the town hall and the Linden closed if it cant be self funded. Other galleries in Port Phillip can fund themselves so why cant the Linden committee. I understand that this years exhibition was probably organised last years before the current new committee member joined it.”

This story is more about the ambitions of certain people involved in local politics creating a controversy to be noticed and Victoria Police being unable to learn from the experiences of their NSW counterparts with the raids on Bill Henson and Juan Davila’s exhibitions. This is yet another sorry and pathetic part in the story of Australian censorship.

The gallery, St Kilda’s Linden Centre for Contemporary Arts, is one of Melbourne’s oldest council-funded art galleries and has a reputation for quality exhibitions. It is well known for its annual postcard exhibition. I have no doubt that the curatorial team had appropriate warnings (warnings are so commonplace now in exhibitions). Sue Foley, the chair of the Linden board, released a statement this morning saying: “The centre is concerned about the nature of the allegations made against Mr Yore, however it continues to support freedom of expression that has artistic merit.” Foley added that the exhibit remains closed and the gallery has fully co-operated with police.

The artist Yore won the $8000 Wangaratta Contemporary Textile Award 2013. Last year he was exhibited at the NGV’s Atrium at Federation Square. There is an interview with him from last year, along with un-pixelated photographs of his art in Desktop. The photo below comes from his recent exhibition at Melbourne’s The Substation gallery in Newport and is believed to be very similar to his current installation: 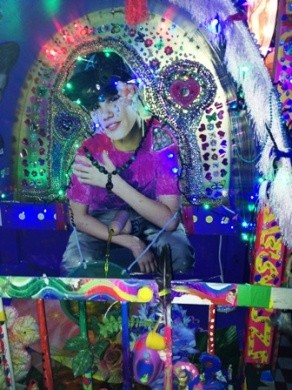 Linden’s exhibition, Like Mike, is a homage to Australian artist Mike Brown and opened on May 17. The curators of the exhibition are Jan Duffy and Geoff Newton. Duffy is an experienced curator as is Newton, who is well known as the director of Neon Parc gallery. Newton, from my knowledge of him and his work, is a man who seriously wants to advance art.

In an interview about the current exhibition, Yore describes his installation:

“It has a sickly sweet surface, it is very colourful and alluring. But then there are deeper things sitting just beneath the surface of the work that talk to more symbolic ideas, [that] relate to socety as a society of excess, spectacle, consumerism, of frenzy and even violence as well. There’s a darkness underneath the work that is kind of sarcasticly pointed to through the bright joyful aspects of the work. I see the work very much as a celebration of queer culture. There’s a lot of phallocentric imagery … I guess I wanted to talk about the phallocentric nature of our culture as well.”

Police may be investigating Yore, but detectives and the mainstream media have yet to examine the conservative political agenda behind the complaint.

*This is an edited version of two posts that originally appeared on Black Mark.

Carmen rides back into the ring: sponsor must butt out

Ha! If Adrian Jackson, Chris Spillane and Andrew Bond want to go out to find obscenity-as only a religionist can, they need look no further than the ultimate obscenity…The priests of the Catholic church who have been sodomising small children for the past two thousand years.

To actually go into art galleries searching for it is fatuous, farcical, and indicative of their tiny minds.

Pray tell good sirs; when was the last time a small child volunteered to wander into private art gallery?

In relation to the Liberal Party I was a member from about August 1994-June 2003. I have been out of the Liberals longer now, 10 years, that the 9 years I was in it.

I was suspended from the Liberal in June 2003 for 12 months for opposing the Iraq war invasion and got on Ch 10 news and ABC radio on invasion day. I banned US and Israel citizens from my B&B because of Iraq and the oppression of the Palestinians by Israel – a noble stand. I never rejoined the Liberals.

I lifted the US ban after Obama withdrew his Army from Iraq however the ban on Israeli still stands however I have never has a booking request from Israel but I have has a nice Aussie Jew as a guest a few years ago. It not a Jewish thing.

Actually I am in the habit of visiting art galleries sonny boy. Recently I have visited the NGV for Monet, Dutch Master, French Impressionists, Vienna Art & Design, Britain in the 60 and Napoleon.

I plan to visit every exhibition of the Linden Gallery this year something I told all 3 St Kilda councillors before the now close exhibition opened. So Mark do a bit of research boy.

Interesting the twitter chatter has gone silent, only one small letter in The Age and only one comment (now 2) on Crikey.

I only met Chris Spillane for the first time at the council meeting on 28 May 13 although I knew he stood in Carlisle Ward in last years council election. I had never heard of Andrew Bond until he was a candidate in Junction Ward and won.

He is the first Liberal on Port Phillip Council since amalgamation in 1994. The balance of power has also shifted with 3 Unchain Inc and 3 CAPP/ALP councillors elected.

I have also made my views know about the Roman Catholic church pedophile issue to the print media, on blogs and to my local MP’s who happen to be chairing the Victoria Government inquiry and as a member (Crozier and Coote).

The inquiry must be ruthless with the vile priests involved, compensation must be paid to victims while Pell and Hart should be gaoled as they should have known what was going on at least in the last 20 or 30 years.

A fitting symbolic punishment would be the demolishing of St Patrick’s cathedral and the blue stone used to renew Melbourne gutters. From the gutter to the gutter so to speak.

While agreeing with your comment (4) I note the gallery in St Kilda is now closed, leaving it impossible for the public to view the work. Meanwhile one, of your unholy trio, took three visits to be sure his hackles were outraged!