Feeney sharpens his sword in Batman stoush ... Glenn Milne resurfaces with career change ... The Oz talks up the ALP ...

Feeney draws his sword. Victorian Labor “death spot” Senator David Feeney has ratcheted up his campaign for preselection in the safe ALP seat of Batman, dispatching a swingeing missive to local members plugging his political potency. In the extended entreaty, obtained by Crikey, Feeney, who does not live in the electorate, takes a veiled swipe at Socialist Left-backed rival Mary-Anne Thomas, who some have argued lacks experience: “I’m not going to be a candidate on training wheels. I have the experience and I know how to get results. I am ready,” Feeney said in the email.

While Feeney took to letters, his factional foot-soldiers were pushing rumours this morning that Thomas was ineligible to run because her ALP membership was not up-to-date. Under ALP rules, members are required to be paid-up for 12 months prior to a preselection nomination. However, such claims are likely to fall on deaf ears when the matter goes before the state’s ALP administrative committee. Successful ALP Right-backed Gellibrand candidate Tim Watts is understood to have also had continuity problems, but his candidacy was over-ruled by a two-thirds majority of the powerful 33-member ruling body.

Other candidates in the race are steadily withdrawing. Daniel Andrews’ press secretary Chris Reilly, who threw his hat in the ring last week, terminated his nascent bid on Sunday. Another Left contender, Emily’s Lister Hutch Hussein, has also withdrawn, contrary to suggestions in this morning’s Australian.

A little lobbying … Spotted at Liberal and National fundraisers lately, and most recently at the weekend Nationals Federal Council meeting, none other than Glenn Milne. Milne, last seen on television filing for Al Jazeera English, has moved on from his career as a journalist, occasional pugilist and Peter Costello advocate to become “consultant” at his wife Jannette Cotterell’s successful lobbying firm, Executive Counsel. “Based at Parliament House for 27 years my contacts with both sides of the aisle are deep and abiding,” Milne says on networking site Linkedin. “I am on a first name basis with most members of both the Cabinet and Shadow Cabinet. Most senior members of the Canberra Press Gallery are friends or former colleagues.” Almost sounds like he was slumming it with the ever-genial country cousins.

The Oz talks up Gillard. Really! Eagle-eyed Crikey correspondent Guy Rundle passed on this tip. Given the ALP’s strategic decisions over the past months, we’ve long thought that the party’s brains trust and its camp followers live in a separate reality. Here’s proof with The Australian’s Troy Bramston tweeting the latest Newspoll figures (which show the Coalition opening up a 16-point lead on the two-party-preferred):

Yes, poor Troy’s brain can’t accept that Labor is actually losing by close to 20 points on 2PP. So it simply flips the figures. No wonder he spends all his energy attacking The Greenz. If you think you’ve reduced the Coalition to a cricket team, you have the luxury to swing your guns elsewhere. Great stuff.

Wrong electorate, Brian. It’s understandable that the good burghers of the federal NSW seat of Dobell might wish they lived in another electorate — the dramas surrounding local MP Craig Thomson have been rather distracting. But the Liberals are barking up the wrong tree in distributing this flyer to one of our readers. Why? The recipient lives in Dobell, not Robertson … it’s the Libs’ federal director Brian Loughnane who’s responsible, according to the fine print. 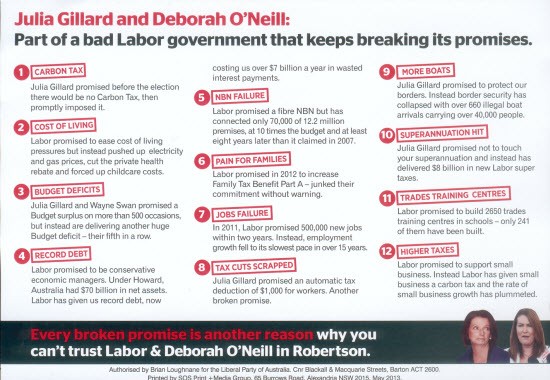 As our reader said, “does this indicate: a) a stuff-up; b) too large a print run; or c) neither of the above, just pure bile?”.