Tony Abbott occasionally shows signs that he's not as different from Labor as he claims -- in ways that don't augur well for his government. Can Joe Hockey assert some influence? 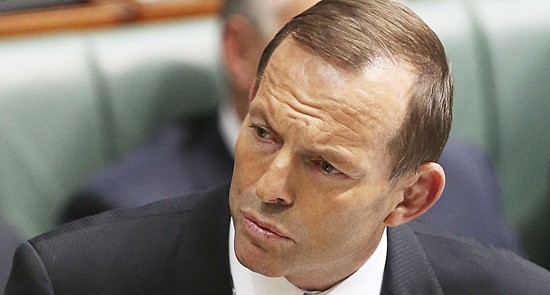 I copped some grief on social media last week for suggesting on The Drum that the Opposition Leader had been trying to look more leader-like of late, and succeeding. But since deciding to roll out some actual policies, endorse the government’s budget cuts and soften his tone to a “more in sorrow than in anger” pitch, he’s looked less like an opposition leader and more like the alternative prime minister.

And when, in a tactical blunder, leader of the house Anthony Albanese gave Abbott leave to respond to a Rob Oakeshott question last Tuesday and Abbott used the opportunity to assail the government over its carbon price and spruik his own scheme as more effective at achieving abatement in Australia, he looked very comfortable indeed.

That was as good as it got for Abbott, though. The following day, the opposition repeated Albanese’s blunder, demanding, and eventually getting, Labor backbencher Anthony Byrne, who chairs the joint committee on intelligence and security, to answer a question on funding for intelligence agencies.

Opposition education spokesman Christopher Pyne had been building Byrne up as a man of seriousness and substance, a lone voice in the Labor wilderness decrying the impact on national security of funding reductions that slightly reversed the massive increase in ASIO’s budget since 2006. That didn’t look so smart after Byrne rose and gave Abbott a brief but fearful shellacking, accusing him of treating national security as a political plaything and comparing Abbott to former Labor leader Mark Latham. The opposition went from demanding Byrne be heard to trying to shout him down within about 20 seconds.

Byrne’s point was rather reinforced when the Indonesian ambassador, who has been assiduously but apparently unsuccessful lobbied by Deputy Opposition Leader Julie Bishop, declared on Friday that the Coalition’s policy of sending asylum seeker boats back to Indonesia was “not possible” and that “no such collaboration will happen”.

Abbott has repeatedly said that Labor has damaged Australia’s relationship with Indonesia and said he would have “much better” relations. At the moment, that claims looks like the sort of counterfactual statement that use to typify Abbott, like his claim that the planet has been getting cooler in recent years, or that the government has no plan for economic growth.

But much worse came on Thursday with Abbott’s backflip on his written agreement to back the government’s shoddy “political donations reform” bill that would have handed the major parties tens of millions of additional funding. Since then Warren Truss, the Coalition’s deputy leader and the man who is likely to be deputy prime minister on September 15, admitted Abbott hadn’t told him about the agreement.

“One of the Howard government’s successes was in replicating the Hawke-Keating dynamic of a more rounded, more popular PM and an economically hardline, tough-talking treasurer.”

Abbott hadn’t told the rest of his leadership group about the deal either (Pyne and Mitch Fifield, as managers of opposition business, had been copied in “to ensure they assist with efficient passage”), but none of them are party leaders who were committed by Abbott to support something they didn’t even know about.

While he didn’t use signature phrases like “a line has been crossed” or that he’d “changed his mind”, Abbott on Thursday looked a lot like Prime Minister Julia Gillard at those points when she’s had to reverse herself or alter course. Particularly when he said that he thought the reform bill was a good idea but that he was no longer supporting it because it had been “trumped by the particular circumstances of this time”. That’s a line that could have been crafted in the Prime Minister’s Office.

Make no mistake, the donations debacle was one entirely owned by Labor, the product of a cynical hierarchy of a hollowed-out party facing electoral obliteration. But the implosion was big enough to catch Tony Abbott as well. Like Labor, Abbott had failed to explain exactly what the problem was that the bill was fixing. Like Labor, Abbott had thought it a good idea to use a bill devoted to enhancing transparency to award more taxpayer funding to the big parties. Like Labor, Abbott ran for cover and abandoned the bill when voters turned hostile.

One of the problems I’ve persistently argued is besetting Labor is that its skills in explaining complex policy, allowed to atrophy in the long years of opposition, have been insufficient to the task of government. On Thursday Tony Abbott, whose leadership has been built on remorseless attack on the government rather than articulation of good policy, showed the same signs of atrophy.

This doesn’t bode well in the man who looks to be the next prime minister. It will exacerbate the concerns of those who fear that Abbott will be far more like former opposition leader Malcolm Fraser than ex-PM John Howard, a leader who will fail to use his mandate to prosecute change. Reformist hopes appear to rest instead with shadow treasurer Joe Hockey, the once-derided man who now looks to be the steel in the spine of the Coalition, the real Doctor No who wants to walk the walk on smaller government when so often the Liberals have only talked the talk, and prepared to make unpopular decisions to do so. Hockey’s “age of entitlement” theme is an attempt to explain to voters the need for unpopular decisions.

One of the Howard government’s successes was in replicating the Hawke-Keating dynamic of a more rounded, more popular PM and an economically hardline, tough-talking treasurer. Clearly Abbott and Hockey aspire to the same presentational impact. But it only works if the leader genuinely supports and can explain potentially unpopular reforms. It’s not clear that applies to Tony Abbott.

Taking Mr Keane’s analysis a bit further, it looks like the real surprise out of an Abbott-“led” Government would be how quickly he will be forced to fold under pressure from the extremist WorkChoices gang in his own ranks. Voters may be under the impression that when push comes to shove, he will buckle to *their* interests and *their* needs. Maybe he will instead buckle to the interests and obsessions of the people who brought the Howard Government undone…. Could be a potent Labor talking point come the election.

I could just as readily say ‘Julia Gillard’s uncomfortable resemblance to a Tory’.

The real phenomenon is Rudd and Gillard doing Howard Lite for six years, so it’s no wonder Abbott resembles them.

Warren Truss when asked about the donations policy might have said he had not heard of it but he went on to talk about the proposal in terms with which I entirely agree. In fact, he surprised me by looking very much more worthy of being leader of the Nationals than Barnaby (which is admittedly not hard). There was a problem in any democracy when political [parties relied too heavily on donations. These donations could make a party beholden to donors and give bigger donors more influence than less wealthy supporters or members of the party. Truss also pointed out that the public needed to be educated in the need. We can add that, if they had, then Faulkner might not have been so disgusted with the concessions granted to the Liberals in negotiations because those concessions might not have needed to be made if the public understood that the purpose of public funding was to make sure that political parties could operate more independently of those who hold the purse strings in our society. Having said that, opponents of the policy are probably right in suggesting that this is a grab for more money by political parties when these same parties will cut funding to Universities by a comparable amount. Although they did not say it, the merit of the policy in principle fades, given the enormous influence that purse string holders already have through MSM, whose attacks on the ALP seem to set the outcome of the election. Pity we will wake up afterward with the same unpleasant feeling that Queenslanders now have from their new government.

Um are you referring to Malcolm Turnbull or former PM Malcolm Fraser?

He also manages to dodge media for questioning,e.g., has put the Cro magnon (Christopher Payne) man out in the line of fire, and has bannished Julie Bishop from sight. That nasty Politician.