As Craig Gore enjoys the river views, ASIC is circling

Regulators are circling twice-bankrupt Gold Coast business tycoon Craig Gore ahead of a Federal Court case later this year. But he's still living in luxury in a $1300-per-week river-side rental.

Craig Gore has the rare double honour of not only being bankrupted (twice) and also holding a place on the BRW Rich List. Back in 2007, BRW claimed Gore had an accumulated wealth of $183 million as the Queensland property boom was in full swing. Within a couple of years, Gore’s empire would collapse in a screaming heap, with creditors losing $489 million and the official liquidator accusing Gore of operating a Ponzi scheme and misleading investors.

But while investors, including British billionaire Lord Michael Ashcroft, lost hundreds of millions of dollars, it appears Gore himself isn’t exactly living in poverty.

The son of former white-shoe property developer Mike Gore (who fled to Canada to avoid debts in the 1990s as his Sanctuary Cove development collapsed) moved into a $2 million property at exclusive Paradise Point on the Gold Coast a few weeks. The property has five bedrooms, six bathrooms, a boat ramp, three lock-up garage spaces and stunning river views … 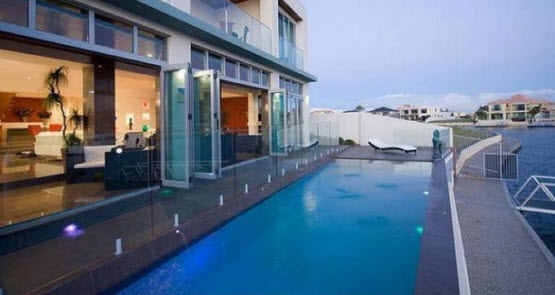 The rental for the luxury abode is understood to be $1300 a week — with one source suggesting it’s being paid by Gore’s wife, Marina.

But while Gore has been able to maintain what appears to be a life of luxury after declaring bankruptcy, authorities are circling. ASIC is taking action against Gore in the Federal Court in relation to allegations Gore and his associates diverted funds raised from 380 investors to Gore’s bankruptcy trustee, former wife, current wife and more than five associated consulting firms. (Among other things, the monies diverted were allegedly used to purchase a $600,000 car for Marina Gore).

The funds were supposed to have been used to purchase real estate in the US and Australia on behalf of investors. While this was occurring, Gore, who is accused of masterminding the activity, was also being paid $2 million as a consultancy fee. (Gore’s wife, Marina, who is currently renting the luxury Gold Coast pad, is also named as a defendant in the ASIC case).

ASIC’s actions come after the liquidator of Gore’s company had previously recommended various civil or even criminal claims for a range of offences, including failure to prevent a company from trading while insolvent, unreasonable related party transactions, breaches of their directors’ duties and potential breaches of the Trade Practices Act.

Gore’s troubles with the law extend past his alleged Ponzi schemes, with the twice-bankrupted businessman fined $700 last month and disqualified from driving after being caught driving a luxury Mercedes in November while banned. The prosecutor alleged Gore “flouts the law and has shown disregard for traffic conditions [with fines not having] any deterrent effect on him”.

Gore recently told the Gold Coast Bulletin that the past three years had been the “hardest of his life” and that “there have been certain assumptions made … this is a trial by brand. The Gore brand.” That brand can’t be worth much after two bankruptcies, the last costing creditors almost $300 million.

The Federal Court case against Gore and his associates is expected to be heard later this year in Melbourne.

*Adam Schwab is the author of Pigs at the Trough: Lessons from Australia’s Decade of Corporate Greed, published by John Wiley & Sons in 2010

They plunder, profit then perish (sometimes).

Full public access to ASIC’s database of company directorships, and access to critical information on all trusts would help protect the public from these psychopathic opportunists and the ‘legal loopholes’ that let them transfer ill-gotten gains out of reach of the law to trusted family members, acquaintances and other opaque entities.

So those, losing, billionaire investors have never heard of Ponzi schemes?