How sorry is Tom Waterhouse really? That and other media tidbits.

How sorry is Tom really? You always know you’re reading rubbish when a businessperson, politician, unionist or media owner cloaks himself in the flag and takes the nationalistic route. So it is with online bookmaker Tom Waterhouse, who went down that route in a front-page “letter” to readers of Sydney’s Daily Telegraph this morning: 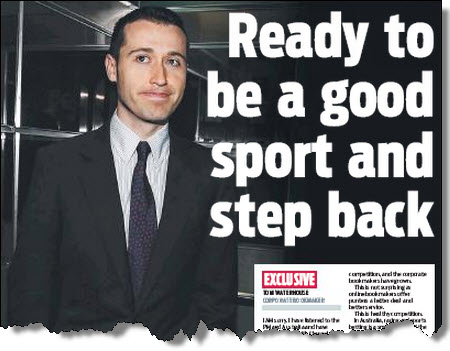 Waterhouse says he and his “proudly Australian company”, which employs about 100 Australian workers, are trying to compete with faceless overseas corporate bookmakers who have “taken over betting in Australia”: “I am taking on the big boys!” Waterhouse and his mates at The Tele fail to point out those foreign-owned betting companies (such as Sportingbet and Bet365) also employ a lot of Australians — many more than Waterhouse. In fact, in some respects, what he is arguing is contrary to the argument The Tele‘s owners, the Murdoch family’s News Ltd/News Corp, argue about the contributions foreign-owned companies bring to Australia. News Corp/News Ltd are American-controlled companies — if foreign-owned corporate bookmakers are bad, are foreign-owned media companies also bad?

Waterhouse’s claim that these “faceless corporate bookmakers” have “taken over betting in Australia” is rubbish. The biggest players in betting in Australia are Tabcorp, Echo, Tatts and of course James Packer’s Crown. It’s not only punting on horses that constitutes “betting”; playing gaming tables, scratchies (the real mug’s game), lottos and poker machines are also part of the betting/gambling industry. Betting and other forms of gambling are “fungible” to a degree for many gamblers. And his claim that racing and sports betting are only a small part of the gaming industry belies the point they are the fastest-growing parts of the industry and have been since 2007. — Glenn Dyer

Miranda in the mosque. Still in The Tele, it’s …

… in which the conservative columnist dons a headscarf for Friday prayers at Lakemba mosque. Once you get past all the tabloid hoo-ha surrounding it, it’s a pretty straight — if not exactly, gripping — account…

Fairfax Media in KFC racism scandal. On Wednesday, Fairfax columnist Sam de Brito penned one of his popular screeds in the wake of the Eddie McGuire “ape” scandal. Great item for Fairfax — nearly 600 comments and 5400 recommendations on Facebook. The problem being that every time the story was shared, this horrendously racist image of a black basketballer looking up at a white basketballer carrying KFC popped up as the illustrative thumbnail:

The Photoshop monstrosity is nowhere to be seen in de Brito’s article. So what’s going on? Looking at the code of that article, the image, “racist thumb“, is linked to appear whenever the article is shared. So the question is, was the racist pic inserted as an offensive but approved clickbait tactic, or has someone been up to no good at The SMH? — Andrew Crook

Front page of the day. Try doing that at home. Brisbane is alive to the sound of ballet, welcoming the famed Bolshoi to town …