The V8 Supercar racing series flew journalists to America to cover an event. It's not the first time they've done it, and other sports like the AFL are also putting journalists on planes to maximise coverage. 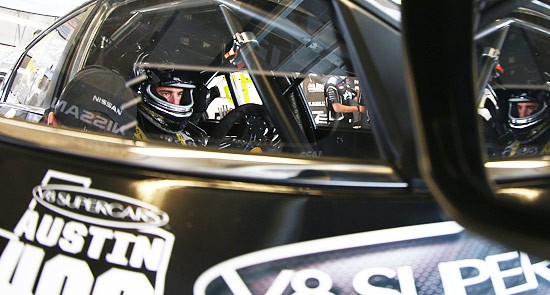 The Daily Telegraph attacked “First Man” Tim Mathieson for getting “VIP treatment” at a V8 Supercar race in Texas recently. But it didn’t say two of its journalists had also been flown stateside to cover the race. Prime Minister Julia Gillard angrily confirmed her partner had attended the race as a private citizen — a pass bearing the tag “Office of the Prime Minister” had been mistakenly given to Mathieson — but Tele sports jocks Josh Massoud and James Phelps certainly did enjoy flights to the United States, accommodation and other hospitality at the event. That wasn’t disclosed to readers of their stories, which ran across News Limited’s nationwide network of papers for days and included not only race reports but news of the apparent success of the inaugural event … Administrators of the racing series wouldn’t discuss relationships they have with media, but the trip included Auto Action writer Mark Fogarty (who also files for Fairfax) and AAP’s Guy Hand. It’s certainly not the first time the sport has flown in journalists to achieve maximum coverage. And V8 Supercar racing isn’t the only sport offering travel for copy.

The powerful and cashed-up AFL competition regularly flies journalists around the country to cover games. Crikey has confirmed football writers from The Courier-Mail and The Tele have received flights from the sport to be on the ground at games involving local sides. Adelaide’s Advertiser says it isn’t getting any subsidised travel from the AFL — clearly administrators are maximising coverage in key non-traditional markets in Sydney and Brisbane, particularly around fledgling start-ups the Gold Coast Suns and Greater Western Sydney Giants.

The AFL wouldn’t comment, either. But sports editors at the papers say the AFL sees value in having local reporters at the games; they’re more likely to splash with bespoke copy on a local side than with wire feed or networked articles. The travel gifts are never disclosed, though at least one editor wondered to Crikey whether they should be.

In February, Tele hack Phil Rothfield was flown to New Orleans to cover Super Bowl XLVII — “the most amazing event I’ve witnessed in more than three decades of sports writing”, he gushed — courtesy of event broadcaster ESPN. That trip was disclosed at the bottom of each article; that both its journalists were flown to Texas for the V8 Supercar race wasn’t.

News Limited doesn’t expressly require disclosure in its code of conduct; Fairfax does. As newsroom budgets tighten, it’s understood there will be renewed scrutiny on the practice by the Press Council

Crikey has also been told Athletics Australia has provided travel to journalists to cover events and that Football Federation Australia regularly flies journalists to A-League games — representatives of both codes didn’t respond to requests for comment in time.

Nobody wants to talk specifics, but motorsport journalists know administrators of an aggressively marketed sport on the mainstream fringe will generally pick up the tab. Editors at News Ltd say they would never have seen the value in paying for journalists to attend the American race, or other overseas events in New Zealand (last month) and in Bahrain and China in previous years.

V8 Supercar racing appeals to the working-class readerships of News Ltd’s tabloids, and the sport has successfully built a strong relationship with management and editors. The Tele championed a Sydney race around the Homebush Olympics precinct in the face of environmental opposition and a murky lobbying effort involving disgraced Labor minister Ian Macdonald. One sports editor told Crikey management directed papers pre-season to make sure the V8s had a “reasonably presence” this year with “proper coverage” off back pages.

“Our journalists’ flights and accommodation was covered by V8 Supercars, although we paid a range of expenses associated with attending the event in question. We will make a point of disclosing this in the future.

“The V8 Supercars is a growing series with considerable reader interest and events across Australia and now to China and the US. Like a number of media organisations, we have to share the expenditure of covering certain events, but in all cases we retain full and complete editorial independence.”

Ahhhh, the perks of “editorial discretion” … or is it “desecration”?

Former Australian Grand Prix Corporation media manager Geoffrey Harris, reported in 2008 (Carsales.com.au) “we are getting a real sniff of scandal in our nostrils about it (the V8 Supercars street race in the Sydney Olympic Park precinct)”.

On the announcement of the event, Mr Harris said “Certainly NSW’s state development minister Ian Macdonald has become a vigorous supporter of the street race idea.” While the V8 Supercars executive chairman was quoted as saying “We are putting our money where our mouth is” in relation to this deal. The NSW Auditor-General subsequently reported the temporary circuit in Olympic Park was actually funded by taxpayers to the tune of $34m.

Mr Harris’ suspicions were confirmed when the ABC reported that in February this year, a “kickback” of $55,000 was alleged to have been paid to facilitate the Olympic Park circuit. The result of the ICAC enquiry is awaited.

Now, as with the Melbourne grand prix, V8 Supercars is caught in a scandal familiar to SAP: grossly exaggerated attendance figures at its Austin USA debut. The Age ‘Sport’ headline (21/5/13) stated “V8 push into US needs tweak” and author Mark Fogarty’s first paragraph had the familiar phrase “stretching the truth.” He referred to the overall success of the venture but went on to say the official attendance (68,900 over three days) was “greeted with circumspection if not scepticism”. The real attendance from the international reports of the event (www.foxsports.com.au/V8-supercars-austin) suggests the real figure would be far fewer.

The Victorian government continues to have business dealings with both the F1 and V8 Supercars organisations but everything is conveniently “commercial in confidence”. Meanwhile, Save Albert Park has a legal opinion that the Grand Prix survives on government handouts approaching $60m per year, based on misleading and deceptive claims.
Peter Logan,
Save Albert Park media

I know this is off-topic but good luck with the struggle Peter. Although I’m a mad keep F1 fan, what they did to Albert Park was just plain wrong.