The art of pain: more live work that’s not for the faint-hearted

Demand for "performance art" is growing, but it's a painful process. For the naked models who stand for hours as crowds gawk, it's a confronting but exhilarating experience. James Elton-Pym reports. 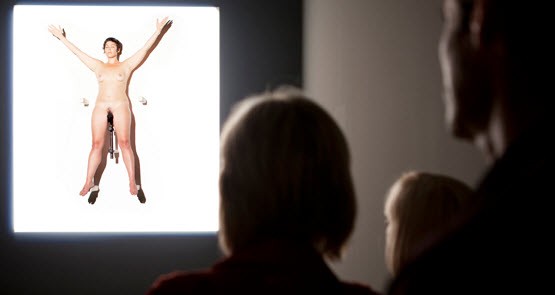 Sitting naked on a bicycle seat two metres in the air, raising and lowering your arms above your head, your circulation is the first thing to go. Then there’s the ache in the coccyx. None of this can be betrayed to the room full of people watching.

When Yugoslavian experimental artist Marina Abramovic first performed her now-famous piece Luminosity (pictured), she did it for six hours straight. Her legs turned blue, and she had to be carried off.

Even in half-hour shifts, Sydney re-performer Angela Goh found it testing. “I learnt a lot about pain,” she told Crikey.

The piece was part of a collection called 13 Rooms — a unique exhibition of “performance art”, where the human body acts as “living sculpture”. Hosted over 11 days in Sydney’s Walsh Bay, it was brought to a close last month to record attendance numbers. Some 30,000 people saw it.

“It certainly did exceed expectations,” said project producer Pollyanna Clayton-Stamm. “The word out there was ‘don’t miss out!'”

Its success looks to be part of a national trend. Exist-ence, an annual Brisbane festival dedicated to performance art, will this year be expanded to Sydney and Melbourne. It will also feature in next year’s Sydney Biennale. As demand grows, more and more performers will step up to the plate and transform their bodies into artwork.

“I did experience a few times where it was quite euphoric … where the pain kind of disappeared, and I felt like I was going to dissolve into the light.”

The focus of her performance, she says, was on connecting with the people in the room, by shifting her eye contact from person to person. It draws myriad reactions: most look at the floor, whip out their phones, or hide behind their guidebooks. “But some people were really ready for it, or really embraced it,” she said. One man stepped forward and met her gaze for a full 30 minutes, with his hand on his heart.

The 26-year-old has never performed anything nude before. Spreadeagled on a wall, lit up by a high-powered spotlight before thousands of art-lovers, it was a bold foray. She recalled the reaction when she told her mother: “Oh, so it’s free? And anyone can go, and anyone can walk in?”

But she’s never worried about people coming for the wrong reasons. “I don’t think these works were s-xualised in any way. I think if you want s-xy naked women, there are plenty of places you can go for that. But if you are watching it and there is some sort of a sense of, not perversion, but arousal … I think any reaction to the work is fine.”

Down the corridor in another room were the black sheep of the exhibit. Nicole Beaumont and Sarah Clark were the only performers enacting a work they had devised themselves; the only Australian artwork on display. The young Brisbane residents occupied a small, elevated plinth, spending their time trying to share the space and change positions often enough to avoid severe discomfort.

And there was a lot of time to spend. Unlike Angela, who shared Luminosity with eight other women, these two had the platform all to themselves. Eight hours per day, 11 days.

“It was the first artwork where we’ve had to physically suffer for our art,” Beaumont told Crikey. “We had swollen ankles, Sarah was bruised all over.” Clark concurred: “I looked like I had a disease.”

But the pair agree harder than the physical struggle was communication. “We found early on that we were getting frustrated with one another if there was bad communication,” said Beaumont. “It’s difficult to express your anger mid-performance, too. It’s like a silent treatment even further than when you were already sitting in silence.” But sharing the plinth also brought the two, friends and professional partners for three years, closer together.

Clayton-Stamm says the success of this exhibition is indicative of the surge in popularity of performance art. The appeal is in its immediacy. “It’s ephemeral, it’s unmediated, you have to be in that space, in person, in order to have that experience,” she said.

Get snap-happy in Ballarat

An aged Brooks saddle would make that more comfortable. I have an unaged one that needs breaking in – six hours would probably be enough. I wonder if they’d mind doing it if I brought it in. On a serious note I actually think this art is very interesting.