Woolwich killers get exactly what they want

The response to the Woolwich terrorists' attack on drummer Lee Rigby was exactly what the killers were aiming for. Was it a crime or an act of terror? 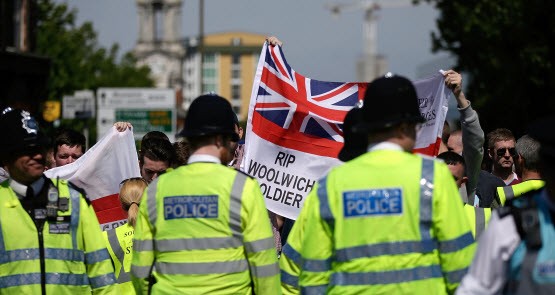 Five days after off-duty soldier Lee Rigby was run over and then hacked to death by two men in south-east London, the event continues to dominate and reshape British political life. Or more exactly, British politics is being reshaped in its name.

The incident was the only successful lethal Islamist killing in the UK since the July 7 bombings in 2005, and the killers were had no major plan or connection to a larger organisation. But the incident was judged sufficient for PM David Cameron to return from Europe, and convene the COBRA anti-terror summit group, usually applied to major multi-casualty incidents. He also stopped on the way in to say that we shouldn’t let ourselves be disrupted in our daily lives by such incidents, thus delivering the first of many mixed messages we would hear over the following five days.

The event itself was gruesome enough, all caught on a dozen phone cameras, the killers’ hands dripping with their victim’s blood. Michael Adebolajo and Michael Adebowale, British-born of Nigerian parents and converts to Islam in their teens, went down to Woolwich, in south-east London — a mildly edgy area, which some US writers rendered as downtown Mogadishu — where a major barracks is located, and hit off-duty drummer Rigby with their car. They attacked him with knife and meat cleaver (not beheading him, as in some reports), then gave an impromptu press conference, apologising that “women had to see this”, but saying that this was vengeance for the violence going on in “our country” every day.

The armed response squad arrived and the men charged them, getting their legs shot out from under them. They remain in hospital under guard. That night, the English Defence League, the hard-Right street outfit, staged a demonstration of several hundred in Woolwich, and several more of similar size across the north of England. Tonight they held a demonstration outside Downing Street, charging the fence that locks the street off. The event set off the usual meme wars, but with a difference. Sections of the Right wanted to enrol the incident as an act of war, while others of both Right and Left wanted to portray it as nothing more than a knife crime. Commentators wondered if it fit the definition of terrorism at all.

It’s a measure of how addled the whole debate has got that the event cannot be seen for what it is: a crime that is also an act of terror. Indeed it’s an older form of terror, in which you target the soldiers of an invading army, rather than random citizens of the country they represent, to create political resistance. “Terrorism” as a non-state act didn’t really migrate to civilians until Michael Collins began targeting Irish associates of the British army, and the Irgun began systematically targeting Arab civilians. Since the killers had told anyone who would listen that they were doing this to show that their rulers were not keeping them safe, and to “change your government”, it was about as pure an act of terror as could be imagined.

What it wasn’t was large-scale — and in the wake of 9/11, the implicit meaning of an act of terror has been that of a threat to basic order. So any act dubbed “terror” has to be imputed with a meaning beyond its lethality. So far in south London this year, close to 30 people have died from knife attacks. But since the majority are gang killings, the continuing lethal violence goes unnoticed, nihilistic acts meaningful only to the gangs themselves. What could not be said was that small-scale acts of terror could be seen as a regular part of modernity, something normal rather than exceptional. In that respect, the incident defined itself as terror — but the reaction to it, convening COBRA and all, completed its meaning, and gave the attackers what they wanted.

The weirder effect was the social and cultural management one, in which Muslim clerics, etc, were called on to denounce the attacks, and there was simultaneously a denunciation of multiculturalism. But since multiculturalism is constituted exactly by defining ethnic-religious networks and groups as “a community”, calling on the clerics, etc, to disassociate themselves seemed to do nothing other than reinscribe multiculturalism as a principle in the political order.

For the Right of the Conservative Party, the attack was a chance to revive the Data Communications Act, the so-called “snoopers’ charter”, which would allow the government to harvest vast amounts of data from people’s telephone, email and other communications. It had been knocked on the head by the Liberal Democrats, but a push to revive the bill has started afresh. Further afield, there was the squeaky sound of barrows being pushed. In National Review, Mark Steyn, in an error-strewn article, accused the British of being passive — carefully leaving out witness to the Rigby murder Ingrid Loyau-Kennett and others who had gone to his aid (not knowing he was dead), and not reflecting overmuch on how relative level-headedness compared with the batshit craziness occasioned by the Boston bombing. Gerard Henderson said that a civil liberties position “looked less plausible” in the wake of the Woolwich killing.

In fact, it was the opposite. Security services had been trailing Michael Adebolajo for two years, and made contact with him when he was arrested on the Kenya-Somalia border, trying to join Islamist group al-Shabaab. At that point MI5 attempted to recruit him as an informer. He could have been charged with travelling to a terrorist training camp, or numerous other offences. Had the law been simply and directly applied, he may not have been in circulation. Instead, MI5 played with him and left him in the field, as it were. It wasn’t the absence of a properly martial attitude that was the problem, it was an excess of it.

Meanwhile, in France, at La Defense outside Paris, a soldier was stabbed in a likely copycat murder. Back in London, war memorials were defaced with the word “Islam”. And in Baghdad, 53 people were killed in car bombs. And the cities of the West, the buzz every evening, buzzes with hundreds of thousands of calls back to the drone-fields, the warlands. In phone/net cafes on every high street, via numberless five-pound phone cards, tales of death and destruction pour into the great wen, into Woolwich, Stratford, Peckham, Hackney, Brixton, Walthamstow, and further north, in Leicester, Bradford.

Doubtless there are few people who approve of Adebolajo’s actions. But terror doesn’t need consent to achieve its aim. By its very act, it refuses active consent, in favour of grudging agreement with its argument — that people X, Y, Z are being oppressed, murdered silently, or otherwise, and that a killer’s red right hand may not wield justice, but might not be without reason.

Britain’s coalition all out of love over electoral reform

Who called these base, low-life murderers “terrorists”?
Was there an “elderly Muslim” knifed on his way home from prayers, the other day? What did that “authority” brand the perpetrators of that “act”?

When it comes to “terrorism” there’s good news and there’s bad news?
The good news is “terrorists will never win”.
The bad news is that reactionary ignorance, fear, intolerance, bigotry, xenophobia, abuse and violence in our civilised society are becoming normal?

Take their “terrorist” badge off them and what have they got?

They become a terrorist when their aim is to spread terror and they succeed in doing so. I think they achieved their aim in this case.
Why do you think beheadings (or attempletd in this case) are so popular when a single shot to the head would have been much easier? This is something the drug cartels of Mexico are quite fond of as well.

Hendo’s onto it this morning in the SMH. Strings together all the cliches and chestnuts that Rundle identifies.

In communicating a message and getting the West’s attention the two murderers scored high marks.

It’s a tragedy they didn’t pursue careers in advertising rather than in butchery.