Communications Minister Stephen Conroy has taken political communication to a massive high point with his performance last night on Lateline.

A massive effort. Communications Minister Stephen Conroy has taken political communication to a massive high point with his performance last night on Lateline. In 10 minutes flat he was able to use the buzz words “massive” and “massively reduce” 20 times. Once every 30 seconds! A truly massive effort.

Keeping it in the company. One of the difficulties when starting a fringe political party is stopping the lunatic fringe from taking over your new asylum. I noticed at the weekend, for example, that the founder and first leader of the UK Independence Party (UKIP) believes his creation has “gone completely fruitcake” and is doomed to remain on the political sidelines despite passing the traditional Liberal Democrats in the opinion polls. Said Professor Alan Sked from his office at the London School of Economics, “my great regret is that the party I founded has been captured by the radical Right and has gone all anti-intellectual. It’s gone completely fruitcake.”

Now I don’t know what Clive Palmer, the founder of Australia’s latest political party, thinks about the radical Right and intellectuals but he is clearly aware of the need to keep matters under his own very firm control. Three of the candidates standing under his banner in Queensland are employees of Palmer-owned companies. The Townsville Bulletin explains this morning:

CLIVE Palmer has launched an extraordinary attack on a Townsville Bulletin journalist after being quizzed about the number of senior Queensland Nickel staff doubling as candidates in his political party.

The mining magnate blasted the Bulletin’s business editor Tony Raggatt during yesterday’s North Queensland campaign launch, calling him a “disgrace” to his profession and refuting claims his candidates were mostly selected from his company’s management team.

Re-energised local party members. And I was silly enough to think Labor did poorly with its vote of 9.7% in the NSW Northern Tablelands byelection — see yesterday’s chunks. Not so according to the official party line given in this press statement:

Opposition Leader John Robertson has welcomed an increased vote for Labor at today’s Northern Tablelands by-election — saying the hard work of rebuilding the party and cleaning up NSW politics would continue.

A primary vote swing was being recorded to Labor as counting continued through the evening. “There has been an encouraging improvement in the local Labor vote since the 2011 election,” Mr Robertson said tonight from Armidale. “This was always going to be a tough by-election.”

Now true it is that back in 2011 when Labor ran dead to help Eddie Obeid’s mate Richard Torbay, who was standing as an independent, the party scored a 3.4% lower house primary vote. But Labor’s Legislative Council vote in the Northern Tablelands was 16% at the same election.

I thank Radio National Breakfast’s James Carleton for reminding me of the National Party figure who once mused that “Sussex street has been running dead in the country for so long, they haven’t noticed they actually ARE dead”.

A refreshing change. Good to see a new style of photo opportunity this morning: 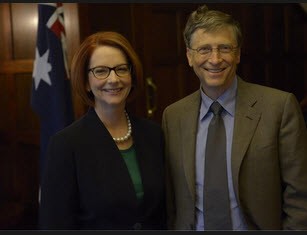 Hob-nobbing at the Lodge with the rich and famous Bill Gates actually makes the Prime Minister look like someone who is governing rather than campaigning as the pair talk about ending polio and  malaria.

Special-pleading madness. You have to wonder if rent-seekers actually believe anyone will take notice of nonsense like that served up about the rising costs in Australia of developing gas fields by consultants McKinsey and Company. The research , reports AAP, estimates more than $180 billion worth of LNG projects on the drawing board in Australia could be lost to competitors in North America and East Africa. The cost of building new LNG projects has increased “tremendously” in the past decade and is now about 20-30% higher than competitors.

Well what a surprise that is. Over the last decade the Australian dollar has risen some 44% against the $US. Not all experts are Australian: the case for listening to other accents

We are facing a global problem. So why aren't we listening to global experts?

Razer: Mark Zuckerberg is full of feelings. He might also be full of shit.

The CEO and founder of Facebook is a rare and billionaire type to be sure, but one, thanks to his habit of being very typical very publicly, we can now identify.

Could have put that Conroy performance to music, “Unfinished Symphony” – Massive Attack too?

Thanx for calling out the LNG industry on its ‘special pleading madness’. I’m adding McKinsey and Company to my list of consultants with no credibility. Deloitte is already there for its rubbish last week.