The government already has rules against betting during a game -- it just needs to extend them to phone betting. Plus other political views along the way.

A simple sports betting solution. There’s one very simple way for the government to stop what it sees as harmful advertising of sports betting on television, and it requires nothing more than consistency. Just make the same rules apply to bets made over the phone as those that already govern bets made via the internet.

Under existing federal law, once a sporting event starts it is illegal for a bookmaker to take any further internet wagers. Yet betting via phone can continue until the game is over. It really is quite ridiculous because there is no real difference between the two methods. Stop all in-play betting, and there will be no odds to update during a game. Hence no point in the “annoying” advertisements. QED.

Steady it goes. No significant change over the last week in the Crikey Election Indicator. 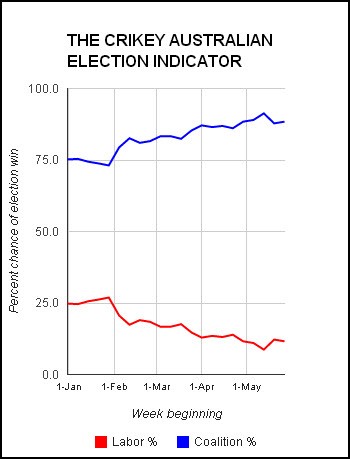 Things are still looking good for the Tony Abbott-led Coalition.

A Labor shocker. I know it was just a state byelection, but it is hard to interpret the weekend result in NSW’s Northern Tablelands as anything other than dismal. A primary vote of under 10% tells us something about the Labor Party brand.

And starring as Julia Gillard is … The Prime Minister’s answer to this question on the new Guardian Australia site this morning: Can you name five things on your personal bucket list?

PM: Pass lasting education reforms, see the western Bulldogs win the AFL Premiership, stay at Giraffe Manor in Kenya, walk the Way of St James through Spain and France, have Tilda Swinton play me in a movie. Cutting from the bottom. How Laurie Oakes must pine for the days when there were subeditors who actually read what you wrote and made sure that if a story had to be shortened to fit into the space available it was done in a way that didn’t destroy the point of it. That those days have largely gone was evident on Saturday with the column the Nine Network’s politics man writes for the Murdoch tabloids.

Laurie ended his piece with a delightful anecdote about former first lady Hazel Hawke that you would have to have read in the Hobart Mercury to really appreciate: In Brisbane, The Courier-Mail cut the item completely which I suppose was better than cutting it in a way that destroyed its meaning. In Adelaide The Advertiser settled for half the anecdote, with a repeat of the original Oakes column extract without any reference to the aircraft knitting extension. At least that let it make sense. The Melbourne Herald Sun stopped halfway — a real example of a thoughtless sub cutting from the bottom.

But it was left to our old favourite the Sydney Daily Telegraph to completely distort the author’s meaning: No shouting back there, but the impression of a subservient woman. Surely the leading contender for a worst subbing of the year award.

Or maybe not. Then again, punters might not agree with that subbing starting favourite. From yesterday’s Sunday Herald Sun: After seeing Swinton in “Burn After Reading”?
That chair?

And as Limited News cuts everything else (to fit it’s agenda0 – why not Oakes? Besides he only shows them what real journalism is all about.