Game on as Guardian Oz turns on the razzle dazzle

The Guardian launched its Australian website to much fanfare today. It's an impressive showing, but questions about the site's long-term sustainability remain.

The Guardian strutted onto the Australian media stage at 6am this morning like a peacock with its tail feathers flaring. This was anything but a soft launch, and will quickly wash away any lingering doubts about the ambition and seriousness of the enterprise.

Today’s launch has been months in the planning and it shows. The site, bankrolled by wotif founder Graeme Wood, has a crisp, clean design mirroring its British parent. The content is plentiful, diverse and, perhaps most importantly, includes stuff you won’t find anywhere else. Unlike Graeme Wood’s other online offering, the relatively static The Global Mail, the front page has been regularly updated with new content throughout the morning.

The site’s front page is a mix, roughly 50-50, of local content and pieces from The Guardian‘s global network of reporters. Much of the local content is sourced from a team of freelancers and bloggers, rather than the 15-odd full-timers on staff, which will help editor-in-chief Katharine Viner keep costs down. Crikey hears more journos will be hired next year, with the total full-time editorial staff to build towards 35 if things go well. 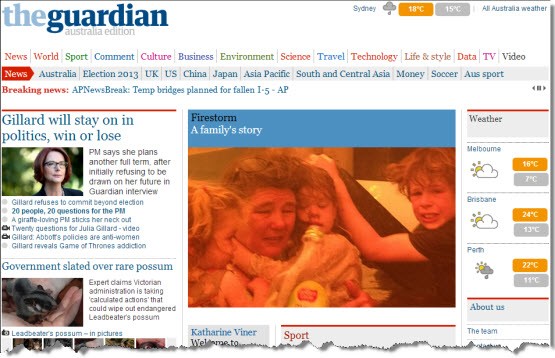 In an extended interview with Prime Minister Julia Gillard, political editor Lenore Taylor ferrets out two interesting facts: that Gillard may not hang around as a local member if Labor loses the election and that she’s a Game of Thrones devotee. The site also roped in 20 Aussies — including a priest, a school girl, scientists and a paralympian — to hurl questions at the PM, Q&A-style. It’s a clear signal from The Guardian they’re keen to break down the media’s traditional gatekeeper role and invite non-journalists, including ordinary people, into the story development process.

There’s also a news story on endangered possums, a TV review by Helen Razer and sports analysis from Sydney Morning Herald veteran John Huxley. Katharine Murphy, formerly of The Age, is live-blogging on politics throughout the day.

The op-ed selection — Robert Manne on indigenous Australia; John Pilger on Iraq — will appeal to progressive loyalists, but do little to win over the site’s conservative critics (hello Gerard Henderson). A prominent piece by historian Thomas Keneally on his love for The Guardian‘s cryptic crosswords is more indulgence than insight.

There’s nothing yet from David Marr, who’s working for the site part-time while penning a Quarterly Essay on Catholic Cardinal George Pell.

One of The Guardian UK’s big strengths is its multimedia and data visualisation work. During her fact-finding tour across the country — in which she met with virtually every major media player — Viner made clear she feels there’s a gaping hole in this area in Australia. This is especially true following the quiet demise of the ABC’s online investigations unit.

Guardian Australia‘s first foray into this space is a highly detailed multimedia special on the January bushfires in Tasmania. While journalists may proclaim it’s an old story, the readers seem to be digging it: the story is the most-read Guardian story worldwide over the past 24 hours.

Whether the site can keep up the pace after the first day buzz dies down remains to be seen. So does its long-term financial sustainability.

Although the exact nature of Wood’s involvement remains opaque — including how much money he has coughed up — Viner expanded on the site’s funding for the first time this morning, telling Radio National’s Fran Kelly Wood has guaranteed funding for five years. Then it’s up to the site to survive on advertising revenues alone. That’ll be a tough ask, especially if the UK Guardian, heavily subsidised by profits from UK used car magazine Auto Trader, continues to bleed cash at the current rate. Along with sister site The Observer, the paper reported losses of 44.2 million pounds last year.

Nevertheless, Viner insisted this morning: “The fact that we’re free and that people spend so long on our website has proved to be a really good commercial model for The Guardian. I admit it wouldn’t work for everyone … but it’s a good model for The Guardian … I think we’re here for good.”

Will the mainstream media redeem itself on Assange?

Time will tell I guess. Its great having Katharine Murphy back, her columns in the Age were always a must-read. Sadly the Age website (and paper) have declined in quality (too many Sydney based stories and columnists) so maybe, if the Guardian can avoid that Sydney-centric stuff, it just might succeed.

The Firestorm audio visual has a great resonance but I still think the attempt at deep analysis wavers, just as Australians are generally in denial about a critical aspect of the fireprone landscape. There is reference in the text to 3 elements for fire – fuel, oxygen and ignition, and then a cute finesse of fuel to mean “dry” forest. What does this dry/wet factor really mean? Walk in a very old forest with 300 to 500 year old eucalypts and it is transitioning to rainforest. It’s damp if not downright wet. Wet stuff doesn’t burn. Essentially there is a society wide denial of the destruction of thos closed canopy ancient forest. There is lots of talk about Aborigines patch work burning – but here’s the news – the Aborigines didn’t have chainsaws and D9 bulldozers so they didn’t cut down ancient trees, destroy canopy and thereby wreck the wet micro climate under that canopy. Secondly there was alot more ground dwelling native mammals to process the understorey into deep wet topsoil. So no, hot weather and even hot north winds does not connote or conflate as dry forest. But logging does. When will loggers face the music? And I don’t mean the last 20 years, I mean the last 150 years.

With the Fairfax going to a paywall and others already there I think Viner’s comment is right on the money….
“The fact that we’re free and that people spend so long on our website has proved to be a really good commercial model for The Guardian.”

Give the old gir4l some time Matt and let us all hope the competition they may offer is a competition for quality material and presentation rather than than a mindless grab for viewers and hits.