An open letter to Member for Stuart in the Northern Territory Parliament Bess Price from self-described unionist, feminist and ranter Celeste Liddle in response to comments made by Bess Price in an adjournment speech earlier this month.

You can read the full transcript of that speech on the NT Parliament Daily Hansard. An edited version was posted at the Alice Springs News site. Celeste’s original post can be seen – along with all of her worthwhile rants – here.

I read with much interest your recent speech to the Legislative Assembly as published in the Alice Springs News.

I was moved, saddened, angered and perturbed by what you said to the point of where I felt the need to write this open letter to you.

I am writing to you as an Arrernte woman, as a black feminist, and as a dyed-in-the-wool member of the left.

I am also writing to you as someone who lives in Melbourne (although half my life has been spent on the Stuart Highway) and whilst I am definitely not “middle class”, I live in the suburbs and am an educated professional.

I am a committed trade unionist.

I wanted to put this all upfront because in your speech you have levelled your criticism at the left.

I feel that your criticism of the left is misplaced and wrong and I hope that I can show you why I feel this is the case.

We have made acquaintance before, although not actually met. We were both on that fateful episode of Insight in SBS TV I saw you looking at me prior to the show and felt that you may have recognised me through my family.

In that forum, I accused you of “social Darwinism” as I felt that your opinions reflected those principles.

Additionally, as you do reside in the Alice and like all residents of that town benefit from the displacement of the Arrernte through murder, removal policies leading to the Stolen Generation, and numerous other practices, I felt that your opinions showed a neglect of the significance of those facts and how they may shape the identity of those around you.

That comment barely made it to screen; I was almost inaudible and really only our reactions to it were clear.

I don’t take that comment back … I still feel it was true.

You made it clear in that forum that your claim to Aboriginality is stronger than those of us who are of mixed decent because you are “full blood” and you know language, culture and song, yet you are living on lands of acknowledged “frontier battles” and could not acknowledge that some may not have had that same access to culture because these things occurred on their lands.

Culture is not a static entity and has never been pre- or post-colonisation. I believe that shared historical experience is as valid a cultural element as anything else.

Long story short: I question and will always do so.

I don’t believe everything I’ve been told and I certainly will not forgive transgressions of basic human rights when arguments of cultural practice are used.

Here’s where I get to the nitty-gritty of this open letter: despite my left-wing views, I do not stand for the abuse and murder of our women as you assert that the left does.

The cases you mention are shocking, and the fact that there may never be justice AND that people stood by and watched it happen sickens me to the core.

I know that these cases are so outrageous and that often it is only due to the age of the victims, the brutality of the crimes, and the amount of people who turned a blind eye to it all, why they make the mainstream media on the East Coast.

Unfortunately the situation does not always seem to get a whole lot better for those Aboriginal women who live in the cities and have a number of support mechanisms at their disposal that they try to call on, as the case of Andrea Pickett shows us.

This is sexism, compounded by racism, and the suffering it causes is unacceptable.

You state in your address that the author “Dr [Stephanie] Jarrett is saying there are elements to our traditional culture that we must change if we are to stop the violence that is destroying us” and that you agree with this summation.

I remain a proponent of self-determination and I believe that a core part of that is the ability to proudly engage in, and celebrate culture in ways that reinforce one’s identity and sense of pride.

This includes acknowledging systematic oppression and how this contributes to situations and issues in our communities because it is, most certainly, a factor.

What I do find difficult to stomach though are the additional arguments supplied by Dr. Jarrett whereby an apparent answer lies in the ability to have a greater ability to share in mainstream Australia and assimilate.

The trade union I work for is currently trying to get domestic violence clauses into collective agreements in universities in acknowledgement of the approximately 1/3 of the women who work in the sector and will experience domestic violence. These clauses will cover the approximately 700 Aboriginal women (including some in remote communities) that work in the sector and who are, it is estimated, twice as likely as their non-Aboriginal colleagues to experience violence.

It will also cover the approximately 450 Aboriginal men in the sector who are also significantly more likely to experience violence than their non-Aboriginal colleagues.

Domestic violence is considered a workplace issue now because, far from being something that simply happens in the privacy of a home, or publicly in an isolated community, it effects a victim’s ability to participate in everyday life, and that includes holding down a job.

Whilst you’re noting that community members stood around and watched a young mother be brutally murdered in a town camp, on the streets of Melbourne since the 1970s women have marched to change deeply embedded social attitudes dictating that women ask to be attacked if they walk around by themselves late at night, if they dress certain ways or if they act in certain ways.

We saw this play out in Melbourne most recently in the case of Jill Meagher who, whilst she was afforded a great deal of coverage in the media which the women you mention were utterly denied down here, was being questioned as to why she was out late that night, why was she drinking, why had she walked home alone?

Whether they’re standing around watching it, or they are questioning a victim’s actions in the media, society is approving the perpetuation of violence against women and allowing it to continue.

Assimilation will not solve it but will only shift how it is publicly reacted to.

Much more radical solutions are needed.

You say that “Convictions usually lead to light sentences. I was told by a senior lawyer that no jury in Alice Springs will convict an Aboriginal person for murder if the victim is also Aboriginal and he or she is only stabbed once”.

Whilst this may well be the case in Alice, but being in a more urban setting won’t always protect the victim either.

Women who are victims of violence rarely pursue it through the avenues available to them. This is because the legal system and society continually fails them. Sentences are often a joke, conviction rates are low and women are rarely believed.

It is well documented that Aboriginal women are significantly more likely to be victims of intimate partner violence, of sexual violence and of homicide and this of course requires specific programmes targeting communities and then tailor-made in collaboration with those communities based on their specific requirements.

Targeting domestic violence against Aboriginal women in Melbourne from Aboriginal perpetrators of course requires a different approach to targeting it in Mutitjulu.

Our Aboriginal women in the cities with access to what you deem is a fairer system are still presenting to Aboriginal Health Organisations with injuries, they are still ending up in refuge hostels trying to escape violence and they still cannot guarantee that if they pursue the matter it will be dealt with fairly in a legal system that is dominated by white males and based upon laws from another country.

White women cannot be guaranteed that they will be dealt with fairly so what real chance does a black woman have?

This is the crux of it all for me: are we actually looking to just lessen the impacts and numbers of victims here or do we wish these issues to be eradicated?

Culture needs to be examined and elements that state that women are of lesser value and men have little control over their actions need to be tossed out.

Elements that state that Aboriginal people are of lesser worth and that their social problems cannot be examined need to also be tossed out.

I do not agree with top down approaches such as those you praise when you talk of the braveness of (Federal Indigenous Affairs Minister) Macklin, because I believe that these just end up replacing one form of abuse with another.

You cannot empower a community to positively address these serious issues by further disempowering them and removing their agency.

You state that “For the left and for many Aboriginal politicians on the national stage, it seemed the only issues worth talking about were the Stolen Generations and Aboriginal deaths in custody”.

This is not the case.

I am Arrernte and I want better for our women. I can name a number of Aboriginal women and men who are also of the left and who want the same and a number of non-Indigenous members of the left who echo this.

But here’s the thing: whilst you continue to deny my existence as an Aboriginal woman and the right of myself and my family to claim our heritage and history and assert that we therefore are not “true blackfellas”, we cannot stand side-by-side in your cause.

We are rendered unable to share information because you are blocked to our experiences from elsewhere and how these may be linked.

You deny us the ability to speak of violence in these communities in our own ways because you deem us as having no right due to where we live or what other heritage we may have.

I feel that after seeing you reported so many times in the media as well as witnessing it first-hand in a TV studio that you are not particularly interested in what I and others like me have to say.

If I am wrong about this then I would completely welcome an open dialogue to see how we can work together to combat issues of violence in communities.

I look forward to your response should you deem a response appropriate. 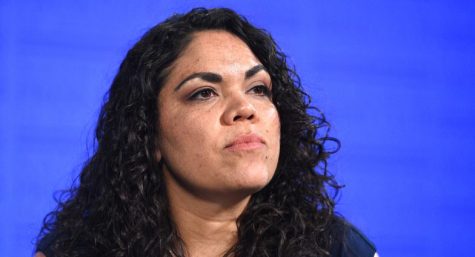 How Jacinta Price became a darling of the (alt) right

Stopping the Violence … and the traffic in Alice Springs