James Packer has moved to sell his $264 million stake in Echo Entertainment Group (EGP) despite gaining final approval to increase his stake past 10%. 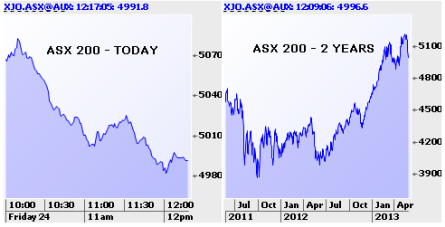 The Market is down 71 — banks down again as the safe income theme continues. Our futures were up 16 this morning. The Dow Jones finished down 13.

A report by New York Federal Reserve staff economists said that they expect US economic growth to be at 3.25% next year. They see the labour market as likely to take a long time to recover, with unemployment averaging 7.35%. Inflation is expected to move towards the Fed’s 2.0% target.

European shares are down after they got their first opportunity to react to Ben Bernanke’s comments and the contraction in Chinese manufacturing hit.

Japan’s Nikkei was down 7.3% on the back of volatile bond yields.

Hewlett-Packard jumped more than 17% after raising its 2013 outlook and increasing its dividend 10%.