We think perhaps The Daily Tele has been a bit overzealous with rhetoric and under-attentive to the facts in reporting the UK hacking murder.

Morrow still benched after racist gaff. ABC radio broadcaster David Morrow will return from suspension after being caught on air making a racist comment during a rugby league broadcast — but he’s been banned from calling the big games this season and will undergo a “program of cultural awareness”. ABC Grandstand manager Craig Norenbergs announced the decision to staff this morning in an internal email obtained by Crikey:

I am writing to tell you that the ABC has wrapped up investigations into the on-air comments made by David Morrow before the Monday night NRL game 2 weeks ago. You may see some media which reflects the following sentiments and agreed position with David.

We have great trust placed in our hands: the community holds us responsible for everything we broadcast, whether accidental or deliberate. David, and the ABC accept that his on air comments:

David has underlined that he did not intend for his comments to be broadcast, nor did he intend his comments to cause offence or hurt to anyone. Trust is a hard thing to earn. We must be vigilant to maintain that trust with our audiences. As a public broadcaster, we should never harm or offend. We take very seriously the issues of discrimination and prejudice.

David has agreed to work with the NRL Indigenous Council on a program of cultural awareness, and to undertake further ABC training in the areas of discrimination and appropriate workplace behaviour. David will continue to stay off air until this training is complete. David has also agreed he will not call the 2013 State of Origin series, nor will he call any games in the 2013 NRL finals series. He will not undertake international travel on behalf of the ABC for the rest of the calendar year. He will return to calling the NRL once he finishes his required training.

David accepts the seriousness of his actions and has apologised. He understands that there are certain responsibilities that come from working at a public media institution and that as a senior broadcaster he has a responsibility to set the standards of behaviour for us all. David has agreed to meet with the Bonner Committee, the ABC’s primary advisory and representative body on matters relating to indigenous staff, content and communities, to apologise and discuss how he can assist the ABC and the committee to meet the objectives set out in the ABC Reconciliation Action Plan.

The ABC and David recognise the contribution that many cultures make to the diversity of the Australian community, a recognition that applies in relation both to the ABC as an employer and in relation to the quality of its content which educates, entertains and informs Australian life. I believe everyone in Grandstand has learnt a lesson from the past few weeks, and it will make the department a better place. As broadcasters and people, we set the standards. The bar is high, but that is why we work here. We value integrity, respect, collegiality and innovation. I know I don’t have to remind you that we cannot provide any comments on this matter. I also ask that you support David on his return, and we work together as a team.

History, geography check for Miranda. A great story on page four of The Daily Telegraph today (“Calls for calm but UK outrage grows”, by Charles Miranda) and syndicated across News Limited on the Woolwich hacking murder. Let’s take in a few choice pars:

“In 2011 the police shooting death of a youth in Tottenham sparked riots across the capital in what was dubbed the ‘Blackberry Riots’ with protesters rallying via social network at various parts of the capital and later other cities including Birmingham, Bristol, Manchester and Portsmouth.

Video of the day. Remember Anthony Weiner and his, err, wiener? The disgraced US congressional s-xter is back — running for mayor of New York City. His new campaign video has been helpfully annotated by The Daily Beast … 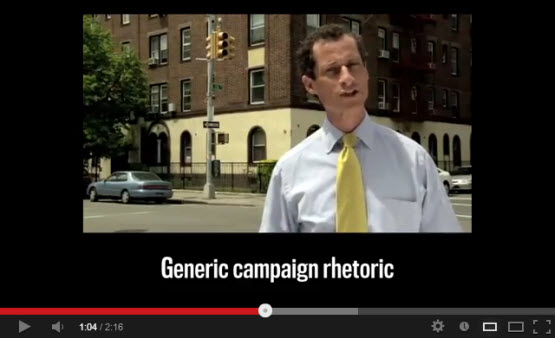 Front page of the day. Geelong mourns the death of Ford like a favourite son. With the iconic plant to close, and hundreds of local jobs lost, the Geelong Advertiser has pages of coverage … Tweets are about to become twice as insufferable. And other media tidbits of the day.

Seems it's all tricks and no treats for the Democrats with an October Surprise for the Clinton campaign. Hmmm, did someone say "President Trump"?

Into the home straight, this election campaign is anything but.