The ethics of enforced child vaccinations

There is a broad consensus in the medical community that immunisation is safe, effective and healthy -- although not all parents agree. Monash University Law School associate professor Dr Paula Gerber says making childcare conditional upon being vaccinated violates a child's human rights.

The debate around whether children should be vaccinated against illness such as the measles and whooping cough tends to be highly emotive and divisive, with the medical profession on one side talking about epidemics and quoting lots of scientific data, and concerned parents on the other side, recounting heart-wrenching stories of adverse reactions, even including death, following immunisation. What is missing from the discussion is a calm and considered reflection of the human rights of the children at the heart of the controversy.

This week NSW Opposition Leader John Robertson intends to introduce a bill to amend the Public Health Act to allow childcare centres and schools to ban children who have not been vaccinated. Is such a move consistent with the rights of children?

Australia ratified the United Nations Convention on the Rights of the Child well over a decade ago. The convention states:

“In all actions concerning children, whether undertaken by public or private social welfare institutions, courts of law, administrative authorities or legislative bodies, the best interests of the child shall be a primary consideration.”

So when the NSW Parliament is considering allowing schools and childcare centres to ban a group of children (those who have not been vaccinated), its decision needs to be informed by what is in the best interests of children. This is no easy task and requires a careful balancing of several factors, the two most important being a child’s right to health and a child’s right to education.

“Immunization is a proven tool for controlling and eliminating life-threatening infectious diseases and is estimated to avert between 2 and 3 million deaths each year. It is one of the most cost-effective health investments.”

In addressing concerns about the risks, the WHO said:

“Vaccines are very safe. Most vaccine reactions are usually minor and temporary, such as a sore arm or mild fever. Very serious health events are extremely rare and are carefully monitored and investigated. You are far more likely to be seriously injured by a vaccine-preventable disease than by a vaccine. For example, in the case of polio, the disease can cause paralysis, measles can cause encephalitis and blindness, and some vaccine-preventable diseases can even result in death. While any serious injury or death caused by vaccines is one too many, the benefits of vaccination greatly outweigh the risk, and many, many more injuries and deaths would occur without vaccines.”

Just last month the UN Committee on the Rights of the Child (the body responsible for monitoring countries’ compliance with the convention) published guidelines on how the right to health should be interpreted and implemented. It emphasised the importance of immunisations and stated that governments “should ensure that benefits reach all children who need them”. Although the committee did not spell out how governments should ensure this, it would be inconsistent with the tenet of the Convention on the Rights of the Child for governments to endeavour to achieve this goal by punishing parents who decide their children will not take advantage of the health services provided. Governments should endeavour to ensure children attain the highest standard of health through encouragement and education, not intimidation and discrimination.

Article 28 of the convention provides that governments must make education compulsory and freely available to all. The proposed NSW legislation violates this provision by making access to education conditional. As Associate Professor Julie Leask of the National Centre for Immunisation Research and Surveillance has observed, unvaccinated “kids are already disadvantaged by being exposed to illnesses, and this legislation would only further disadvantage them”.

We need to make it easier for children to attend childcare centres and preschools, not create obstacles. We know that already some parents experience difficulties enrolling their kids in school because they don’t have a birth certificate — the last thing we need is more barriers to children receiving an education.

There is no doubt that more needs to be done to increase the number of children being immunised. However, discriminating against children whose parents have decided not to vaccinate them by withholding access to education is not an appropriate way of achieving this. It is not in the best interests of children to try to increase one right (health) by denying access to another right (education). We need to be smarter about the ways in which we can increase the number of children being vaccinated, and use carrots rather than sticks. Using punitive measures to try to improve immunisation rates violates the core principles of the Convention on the Rights of the Child. 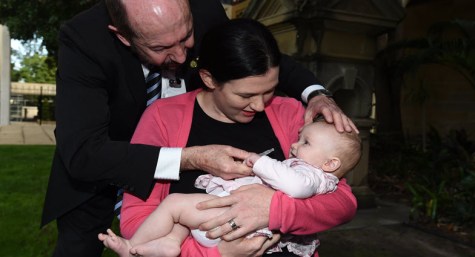 The NSW parliament is not, as I heard the Minister say, considering banning children from school, only allowing schools and child care centres to ban non-immunised kids from pre-school and child care. I’m pretty sure that John Robertson wasn’t advocating banning them from school either, just pre-school or child care. So good start, a highly emotive and divisive debate can surely be improved by spreading misinformation. (yes, insert eye roll here)

A very narrow argument then. The premise that a child who can’t attend child care is ‘educationally disadvantaged’ is an incredibly long bow to draw. Yes, I know, I’ve read the studies but they are inconclusive and do not sufficiently account for other factors.

The crux of the argument goes back to the issue that your rights as a human being are inalienable, up to the point where they interfere with my inalienable rights.

A small minority of non-immunised children endangering the lives of the vast majority of other children is a clear case where one person rights impinge on many other persons rights.

“it would be inconsistent ………. for governments to endeavour to achieve this goal by punishing parents who decide their children will not take advantage of the health services provided.”

Why? Government clearly has a role in protecting children from the decisions of their parents where that can lead to harm. Immunisation is only a measure of degree, less clear-cut than say refusing blood transfusions, or further still, refusing medical care for treatable disease, but on that spectrum.

So, the issue, in a democracy, is, just how far can the government reasonably go? The answer? Well allowing individual centres to ban them is the absolute least that they can do, the very least. It isn’t even providing for a ban on children, just allowing it to occur at individual centres.

I am not a lawyer so I won’t comment on the legal aspects, but this article is factually wrong and logically bereft.

Apart from that, I’m looking forward to the debate that the dear crikey readers will come up with.

Ladies and gentlemen, start your engines.

Selfish parents who choose not to immunise their children and put at risk the rest of the community should be discouraged in all ways possible.

I find non-immunisation of a child is indefensible. Where parents do not immunise their children they must not be allowed to hold the rest of the community to ransom.
I find it very strange that Dr Gerber would hold the education of a pre-schooler more important than the health of the wider community. Also the Australian Health bodies have been very good at ridding us of dangerous childhood diseases and that is the way most people would like to keep it.

I fully endorse immunisation of children but if you are already immunised then is there any possible harm from unimmunised kids? It’s been a while for me but are kids these days normally immunised before attending preschool or similar?

This is perhaps a good topic for a Crikey Clarifier.
Sub-topics might include: Herd immuninty; vaccination efficacy and the dangers posed by the unvaccinated; cross-infection bewtween the unvaccinated; basic relevant statistics for dummies; dangers to the unvaccinated travelling to foreign climes.

I’m sure others can think of more.