Academic fracas. Has someone left an academic post after being the “victim of a physical attack” by another staff member at the university? We put it to the university in question, which did not directly answer the claim, simply saying the person had resigned and the uni wished the person well. If you know more, drop us an email …

Go-away payments not working? A tipster told us this, in relation to Australian government payments of up to US$4000 for asylum seekers to go home:

“About 440 asylum seekers were repatriated from Nauru some time ago with the rehabilitation package of $2000. Ten years later, at least a dozen that I know of (most Afghan Hazara ) came a second time on the boats.”

We put that to the Immigration Department, which confirmed there had been a “small number of cases” of asylum seekers receiving the payments, then coming a second time by boat. A spokesman told us the government paid up to US$4000 under the rehabilitation packages, which was 49% cash and 51% “in kind” (e.g. tools), according to the circumstances of the person. Apparently it’s not known if any of the returnees received the payments a second time …

“My latest project is dating coaching! I’m giving advice to men and women who are hoping to find a mate but nervous about trying online dating. I’m helping beginners get into the swing of things plus those struggling unsuccessfully with the dating process to revamp their profiles and increase their chances. It’s been such fun and seems to be hitting the mark. See attached, a couple of my success stories, with the before and after version of one of the online dating profiles from a male and female client (with their permission, of course).”

It’s a brave singleton who lets “Tina” (as she signs off as) loose on his or her dating profile.

No graffiti thanks, we’re NSW. We’re hearing whispers that the NSW government is about to announce a big increase in a graffiti removal program. Will Dulux paints be involved? Lets hope Banksy keeps away from the streets of Sydney …

Ladies who lounge. We received an email from a reader perplexed by this invite to hobnob with Tony Abbott. Not why would you pay to spend the night with Tony, but what does “Dress: lounge suit” mean for women? Tips has had other female friends a little confused when this turns up on invites. There’s one way to strike back, ladies; put “Dress: cocktail frocks” on your next invitation and see what the gentlemen turn up in. 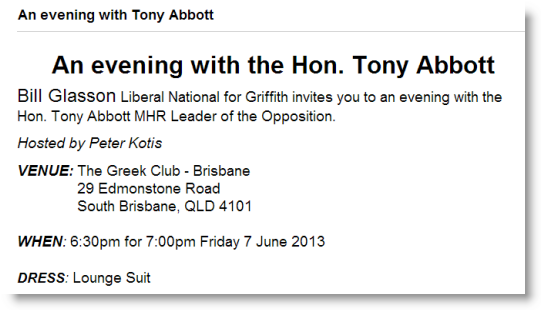 Re “Ladies Who Lounge”. Do you not get out much? Lounge Suit is a perfectly decodable term to indicate suit and tie for a bloke, cocktail dress for a woman, in the same way that White Tie denotes the woman should wear a gown, not a cocktail dress.

Granted, in the age in which blokes will wear jeans to something promoted as “semi formal” it all seems a bit archaic, but it exists precisely to stop men from wearing jeans to a wedding.

Ymmv, but the advisory is more aimed at men dressing badly than women dressing inappropriately.