The Scots learn that the more booze you buy, the more you drink, and the Spaniards design a cracking submarine -- that is so heavy it sinks. Plus other political views noted along the way.

Memories of the lesson Mr Smirnoff taught me. He was as regular as clockwork. Every day within minutes of opening the door at 9am he would arrive to pick up his bottle of vodka. Always well dressed, always polite as he put the purchase into his briefcase. A valued customer for the brothers who owned the new liquor store. Sure, we knew the reason he came in was because we were cheaper than our competitors, who were slower to adapt to the abolition of resale price maintenance aback then in 1975. But Mr Smirnoff became almost like a friend really, and the day came when we felt a bit guilty about having a higher margin on vodka than our biggest-selling spirit, Scotch whisky. Buy a few at a time and we’ll knock off another dollar and save you a trip or two. Which was when I learned a valuable lesson about alcohol. No, no, he told us, if he had more than one at a time he would just drink them and still be back in the morning.

I remembered Mr Smirnoff last night when I read the first annual report of  Scotland’s National Health Service on the operations of the Alcohol etc. (Scotland) Act 2010, which from October 1, 2011 imposed a ban on quantity-based discounts and restrictions on the display and promotion of alcohol in Scotland’s off-trade outlets. As I learned all those years ago, the Scottish experience is that the more alcohol a person has, the more he or she is likely to drink. The curb on sales of multi-pack or multi-buy offers has clearly led to a reduction in total alcohol consumption in Scotland. The amount of alcohol sold in Scottish shops has fallen by 2.6% with a 4% drop in wine sales and an 8.5% cut in pre-mixed drinks.

The restrictions of the new law are quite simple: 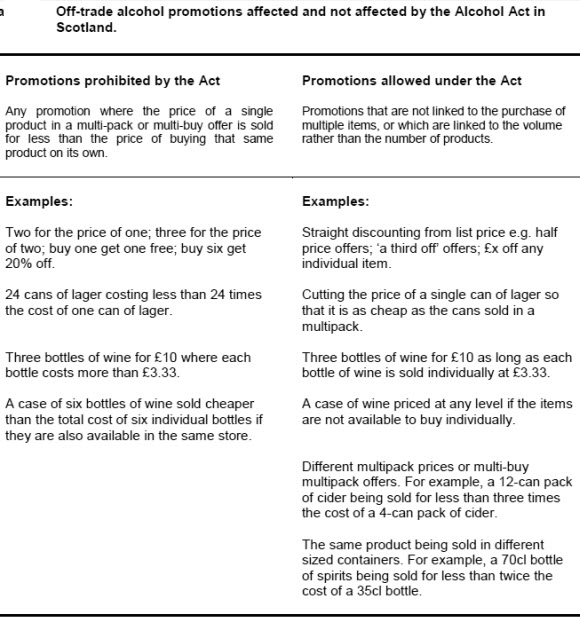 And the result of a detailed statistical analysis of the impact of these changes? The report concludes:

“… the results from this study suggest that the introduction of the Alcohol Act reduced off-trade alcohol sales in Scotland, largely driven by a statistically significant decrease in off-trade wine sales. The Act was also associated with reduced RTD sales, although these account for a very small proportion of total off-trade sales. Similar changes were not observed in England & Wales, where the Act does not apply, which lends weight to the hypothesis that the changes witnessed in Scotland were as a result of the Act rather than due to other unmeasured factors.”

A zero challenge. Far be it from Chunky Bits to question another media outlet’s news judgment, but what are we to make of this item from The Diary in this morning’s Sydney Morning Herald?

Could it be a case of “we want to be holier than them but show the glamour picture anyway”? To avoid being put absolutely into that category myself I bring you this little video launching the Zero Hunger Challenge in Asia and the Pacific: Not just the Collins class. So you thought the Australian navy had its problems with the Collins class? Well in Spain, after spending nearly one-third of a $3 billion budget to build four of the world’s most advanced submarines, the project’s engineers have run into a problem: the submarines are so heavy that they would sink to the bottom of the ocean. “Miscalculations by engineers at Navantia, the construction company contracted to built the S-80 submarine fleet, have produced submarines that are each as much as 100 tonnes (110 US tonnes) too heavy. The excess weight sounds paltry compared to the 2,000-plus tonnes (2,205 US tonnes) that each submarine weighs, but it’s more than enough to send the submarines straight to the ocean’s floor.

“Given the mistake, Spain is going to have to choose between two costly fixes: slimming the submarines down, or elongating them to compensate for the extra fat. All signs point to the latter, which will be anything but a breeze — adding length will still require redesigning the entire vessel. And more money on top of the $680 million already spent.”

Re the fluoride wars: [email protected]&$ the Dandy Warhols is all I can say.