Thrice nominated for the Booker Prize, writer Anita Desai reflected on her place in India's rapidly changing literary canon in a speech in Melbourne last night.

Anita Desai may be one of India’s best-known living writers, but she appears uncomfortable with the title. She sees herself as belonging to a certain time, rather than a certain place — and gently cautions against taking her work as representative of a modern India that has left many of her literary creations way behind.

Desai, who writes in English and was thrice-nominated for the Booker Prize, spoke to a chilly hall in Melbourne last night. Reflecting on a 60-year writing career (she published her first story at the age of nine), Desai described the dramatic trajectory of Indian writing from a small, scattered community that wrote in a leisurely fashion to vibrant, contemporary, in-your-face authors like Aravind Adiga (The White Tiger, 2008).

She sees her writing as reflecting an India that has almost gone, existing “only in pockets”. It’s the India of Clear Light of Day (1980), and still permeates The Artist of Disappearance, her 2011 collection of novellas. It’s an India with a deeply sown sense of history, affected by “the weight of time upon one”, she told the Wheeler Centre audience. It’s an India lived quietly in the shadow of great events.

But Desai, immaculately dressed in a black and orange sari with a warm black top underneath, did point to one area in which her works resonate with modern India. She writes about a “sense of suffocation within the family”, and believes that remains a major influence in a country in which rapid change has left generations with little in common. “Most Indians live lives that are trapped,” the 75-year-old said: trapped by family, social situation, money. It’s a struggle to break free, but family also remains a protector for Indians “in a world that’s very harsh”.

In other ways, India has changed out of sight. “The Indian presence is now so much more immediate … strident,” Desai said in her softly spoken manner, responding to questions from host Hilary Harper from ABC774 radio. Population growth, the spread of media and the immediacy of news has made people more connected and ready to face events “head on”. There is a rebellion taking place, against the economic and political order. Desai said all that should be — and is — fodder for the crop of new Indian writers.

Desai is the mother of Kiran Desai, who won the Booker in 2006 for The Inheritance of Loss, an elegant tale of two Indian lives that prompts reflection on immigration, poverty, family and colonial legacy. The Desai pair lives together in New York, and Anita Desai described a domestic life that many mothers and daughters could only dream about. Anita’s room is downstairs, Kiran’s upstairs. They discourage visitors when writing and turn off phones. They write separately, meeting sometimes in the kitchen or for a walk, where they talk not about their writing but about the day and what they’re reading.

“It’s a wonderful feeling for me to have a companion in the house who understands perfectly what I need,” Anita Desai said.

Perhaps bravely, Kiran has interviewed her mother. Anita was asked in 2011 who her favourite author was, replying “my daughter Kiran, of course”.

So will this veteran keep writing? Desai said she always feels disappointed when she finishes writing a book, because it usually doesn’t go where she had planned. She said if and when she writes something and does not feel disappointed with it, she may stop for good.

Last night, an audience member spoke of how she had read — and loved — Desai’s Clear Light of Day, which was on her grade 3 reading list in India. The family emigrated to Australia, leaving most of their books behind but taking Clear Light of Day. The book, wrapped in a brown paper cover, retains pride of place on the family bookshelf. The anecdote prompted a warm smile from Desai and applause from the audience.

Back on the brink? India-Pakistan tensions escalate over Kashmir 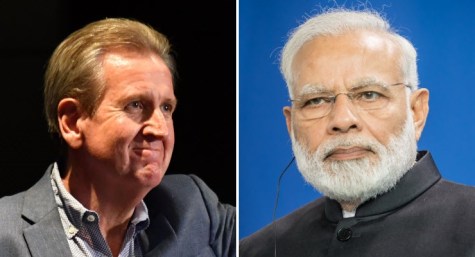