Female cricketers catch a raise, but other athletes struggle

Australia's female cricket team has won a pay rise that means some players will be able to quit their day jobs. But other female athletes struggle to balance training with work. 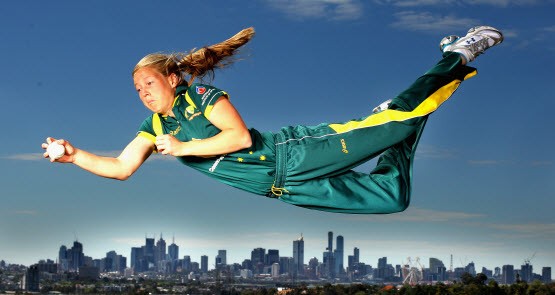 Yesterday, I suddenly took an interest in cricket. Not because of a great batsman or a significant win overseas, but rather because Cricket Australia made a groundbreaking move in support of its female players.

Noting the success and popularity of the Australian Women’s Cricket team, the Southern Stars, Cricket Australia announced a major contract restructure for its female international and state players. The body will now be offering a “squad ranking system” of pay for players that will see the retainer for its number one player increase from the $15,000 she currently receives to $52,000 over the next 12 months. The minimum jump for one of these players will be to $25,000 from $5,000.

It sounds pretty good when you look at how poorly female athletes are generally paid — if they’re paid at all. But even Cricket Australia notes it can’t expect its players to give up their day jobs and education commitments with that kind of cash. Not like the men — with one newspaper estimating CA’s top male contracted players to be earning upwards of $1 million a year. Nor like the average AFL player who takes home $250,000, or NRL player on just under $200,000, or A-League player on $120,000.

Cricket Australia has made a good start, and found itself well ahead of all other sporting bodies in the country, including Netball Australia and Basketball Australia, in more fairly remunerating its female players. But it’s a move whose time has well and truly come: female participation in cricket has risen 18% over the last 12 months, an increase CA attributes to the success and unprecedented media coverage and recognition of the national women’s team.

There are very few women who can earn a living playing sport. Perhaps, with prominent sponsors on board, certain Olympians and tennis players can earn enough over the short course of their careers to set themselves up for life — or at least build the profile they need to pursue media, speaking and sponsorship opportunities after they retire. Even Sally Pearson has failed to bring in the big dollars following the gold medal she won at the London Olympics, tweeting earlier this year about her disappointment at actually losing some sponsors, just six months out from the games.

I became well aware of just how tough it is for even our most high-profile female athletes during a recent interview with former Australian netball captain Liz Ellis. She practised law for the first four years that she was on the team, balancing a full-time workload in a top city law firm with training and competition commitments.

At the time, she says she was doing neither jobs particularly well. “I was the only solicitor in the firm who had their own leave pad sitting on their desk!” she said. “But the reality is that for four years my training and my work were both compromised … It was a balancing act and I was doing neither career much justice. And I was getting incredibly tired.”

Ellis was fortunate to be able to make a decision to give up her law job, given she had media opportunities available to her beyond playing the game. But it was a huge risk to take at the time, and a risk only a handful of netballers have ever really been in a position to confidently take.

As such, she’s always been vocal on negotiating a better pay deal for netballers. Early into her career as national captain she worked to form a players association and affiliation with the Australian Workers’ Union. She put her captaincy on the line in order to negotiate better pay for players and had to trust her judgment that the entire team would stand up together in order to secure the deal. “We needed to understand that we’re not bigger than the sport, but also that the sport relies on us as a major commodity,” she said. It took some serious negotiation in order to achieve even a minimal amount of money for the squad.

In 2013, Australian netballers are now close to achieving a new deal, with squad members looking to have the $200 they currently receive while on duty upped to just over $400. The AWU says Australian Diamond players currently take home an average $10,000 from their 50 or so contract days a year, with the captain and vice-captain earning an additional leadership bonus.

Ellis knows there are limitations in pursuing sport as a career, especially for women. She always promotes the importance of education when talking to young athletes, male or female, noting that a simply injury can be the undoing of even the most sure-fire plans. She personally had the opportunity to apply for an Australian Institute of Sport scholarship in year 11, but initially turned it down in order to finish school. She knew, even at 17, that her foremost priority was to finish school and go to university.

Even today, Ellis notes that she still has the opportunity to return to her law career if needed. It’s a back-up plan she established for herself long-ago in order to guarantee her options.

Women cricketers now have the potential to earn more money, but not to throw in their own back-up plans just yet. A career in sport for women is still a career dream.