War by google ... the secrets are out on our politicians ... cannibal stock shock ...

War via google. We’ve been keeping you posted about the dirty little war between Coca-Cola and Greenpeace over recycling (Coke doesn’t like being made to do it and helped bring down the NT’s scheme. Greenpeace retaliated with this clever ad — which the TV networks have banned, but which has almost a million hits on YouTube). Here’s the latest: Coke has bought advertising so when you google “Greenpeace”, you see Coke. But Greenpeace has hit back with its own paid ads: 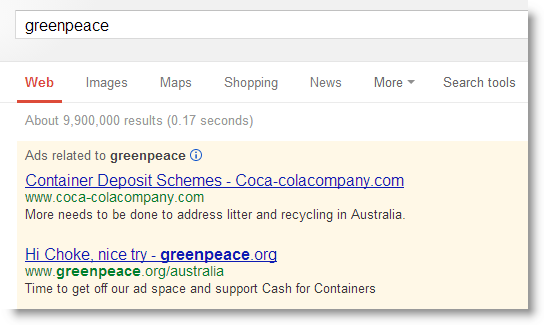 Greenpeace has accused Coke of trying to control the debate. A Coke spokesperson told Crikey this:

“Adwords (or paid search) is a legitimate and transparent means to help people understand our position on recycling and why we don’t support container deposits. Greenpeace are entitled to their opinion, but the idea that we are trying to shut down debate is simply not supported by the facts.”

The spokesperson also directed our attention to Coke’s blog on the subject. Coke opposes container deposit legislation (it puts a levy on bottles, which you get back if you return it to a recycling site. This is how the long-running SA scheme works, and how the NT scheme did work, until Coke killed it). The reason for Coke’s lack of enthusiasm? Among other things, “bringing in a CDS will place that successful [home recycling] kerbside system in jeopardy by eroding its economic foundation”. Isn’t that nice of Coke, to be so thoughtful?

Pollies uncut. Yesterday Tips naughtily asked for the truth about what our politicians are like behind the scenes (it’s a long story, but the ABC referring to Finance Minister Penny Wong as Pansy Wong got us onto the subject). We can’t name names, but guess who?

Which Liberal politician “is a workplace bully. Ask anyone in Parliament House about her outbursts. Volcanic.”?

Which venerable federal Coalition politician often has pie or egg on his tie but is actually very astute?

Which Greens MP is not much liked within the party and finds it hard to keep staff?

Which federal MP met his partner on an escalator in a shopping centre?

Which federal minister has a wonderful head of hair, and when his staff ask for time off to get a haircut, he grants it straightaway, despite normally discouraging time off?

Which former senior Liberal pollie from a southern state kept lots of framed photos of himself in his house (new tenants moved in and were surprised)?

Which bush MP from the Coalition likes to ring journalists and pretend to be the AFP / ASIO / the devil? Actually there’s no need to be coy on this one, as he’s proud of it — it’s Bill Heffernan.

“X, though having not been a senior politician for quite some time, can still be a senior arsehat in my experience. I was working at the National Gallery of Victoria on a day when Gai Waterhouse was holding a private function in the gallery restaurant. Gai, for privacy, had asked to not spread the word that she was hosting a slap-up lunch, so when X strolled up to my information desk I hadn’t heard about any private function. I offered to call someone to check but X threw his hands up and stormed off for no apparent reason saying that it ‘doesn’t matter’. I later got called into my manager’s office for a telling off. X had called the gallery to complain that ‘some clueless boy’ had been of no assistance to him and that as a result he had been ‘deeply embarrassed’ at missing Gai’s lunch.”

Boy, this is fun! Send in your gossip on an MP — tell us who you’re referring to, because we’re terribly nosy. And do feel free to stay anonymous.

Powerhouse dramas. There’s been plenty of coverage of the problems at Sydney’s Powerhouse Museum, a large, well-located museum of science and design — which some reckon has sold out through hosting low-brow blockbuster exhibitions (read Leo Schofield on it here). Director Dawn Casey will soon leave; she had applied for her contract to be renewed but was knocked back. Rose Hiscock will take over at the end of July. We’ve heard from an insider who reckons it’s a difficult place to work at present, and claims there are industrial relations issues that have troubled some union organisers. We’re looking into it …

Legal appointments. Yesterday Tips ran some lines from a disgruntled type claiming the federal government was “stacking the courts with Labor supporters or members”. The person reckons some Labor favourites are bypassing interviews and getting the job, despite not having much experience.

We heard from one legal eagle who said “any review of recent Fair Work Commission appointments would indicate that this tip is bupkis”. And the Attorney-General’s office told us Labor had implemented a more rigorous judicial selection process, in 2008. Previously, there were no criteria for selection, or independent assessment / advice to government. Now, for the federal court, family court and federal circuit court, jobs must be advertised, appointment criteria made clear, panels appointed to assess application and develop a shortlist of candidates, and the panels must meet with shortlisted candidates. The AG then selects “from the suitable group”.

So it looks like our tipster may not be on the money there.

Stock shock. We’re all for trying new foods, but we share a reader’s concern at this new type of stock: “Being flavour of the month takes on a whole new meaning for this TV chef. Is Campbell’s changing its name to Cannibells?” our stringer asked.

Pollies uncut – next (with all their self-righteousness) let’s have their “home & away record” leaked?

Re: Pollies uncut.
Listen tips. We peons who don’t have access to the Canberra press gallery or the Crikey gossip bunker need more clues.

(Apart from the NGV one which even I got.)

So Rosebud will be the Minister for Workplace Bullying?

oh really Paddy? Lets see the colour of your money. Send us an email to boss@Crikey.com.au and lets see if you guessed the NGV one correctly … feel free to guess the other ones too. So far people have not been guessing very accurately.