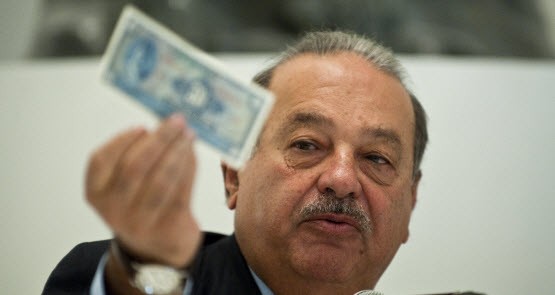 For the past six years, Mexican telecommunications tycoon Carlos Slim has sat atop Bloomberg’s billionaires’ ranking, which is updated every day based on the ups and downs of global sharemarkets. But last Thursday, Slim’s place on top was taken by Microsoft founder Bill Gates. His fortune has spiked up this year along with Microsoft’s share price, which is up 28% in the last 12 months.

Gates is well-known as the man who made personal computers cheap and ubiquitous. But far less is known about the man he overtook last week. In fact, the only thing most journalists use to characterise Slim in recent years has been his title as the world’s richest man.

Slim was born in Mexico in 1940 to Lebanese parents. He trained as a civil engineer before founding his own brokerage firm, and he used profits from this to buy himself into several businesses in construction, real estate and mining. When the Mexican economy nosedived in 1982, he used the downturn to buy more businesses, upping his fortune as he went. Most accounts credit him with owning at least 200 businesses during this period. Even today, almost half his wealth comes not from his telecommunications companies but from his other business interests.

It wasn’t until 1990 that he got involved in telecommunications when he, along with France Telecom and Southwestern Bell Corporation, bought Telmex from the Mexican government.

Telmex has been phenomenally successful, operating near monopolies in both landline phones (80% of the market) and mobiles (70% of the market) in Mexico. In a 2007 interview with the Financial Times, Slim credited this success to the company’s “pay-as-you-go” business model, which made telecommunications far more affordable.

Slim became the world’s richest man in 2006, when his net worth increased $19 billion just that year on the back of several well-timed acquisitions. But in recent months, Slim’s fortune has been under pressure from regulation being pushed by new Mexican president Enrique Pena Nieto. This week, most Mexican states approved a package designed to weaken the power of monopolists in Mexico. Under the legislation, which could become law within a few months, regulators have the power to make companies controlling more than 50% of a market sell their assets. The bills also allow foreign ownership of media and telecommunications companies, meaning Slim could have to compete far more vigorously on his own turf.

This has already dented Slim’s wealth, which is down $2 billion this year. But maybe Slim doesn’t mind so much. In a 2007 interview, Financial Times reporter Adam Thomson asked Slim what he thought of being the world’s richest man. Slim shrugged it off:

“Regardless of whether I am first or one thousandth, I am not going to take anything with me to the grave. I don’t change my life … I am not going to have more children, no more family, nor am I going to live differently. I haven’t changed anything in my life in the last 35 years. Probably not even for the last 60.”

Slim owns no yachts or private plans, and astoundingly, says he still only owns the one house, which he claims is smaller than the one his parents own. If he does decide to live the high life, though, recent troubles aside, he’s still got $70 billion or so to play around with.

Not all experts are Australian: the case for listening to other accents

Razer: Mark Zuckerberg is full of feelings. He might also be full of shit.

Bill Gates did not make personal computers “Cheap and ubiquitous.” He gained a monopoly position with a crappy operating system and rode it to enormous wealth, just as Carlos has used his telecommunications monopoly to do the same. Both are just very successful rent seekers. Lazy Myriam very lazy.

How dumb because Carlos Slim was the richest man for 6 years!!! Are you trying to prove Aussies are dumb or crikey.com.au is?

Im a bit sick of this slack jawed uncritical adulation of blokes like this. He became a billionaire? In Mexico? Wouldn’t you think there would be a few more penetrating questions to ask about this, in one of the most corruption riddled modern states in the world?