What do the polls really show? Plus other political views noted along the way.

Assessing the state of electoral play. Our Chunky Bits participants fared quite creditably in their prediction of what the Essential Research poll would show post-budget. We were just slightly more optimistic about the Labor vote — an average prediction of 45.7% compared with the real thing at 45%. 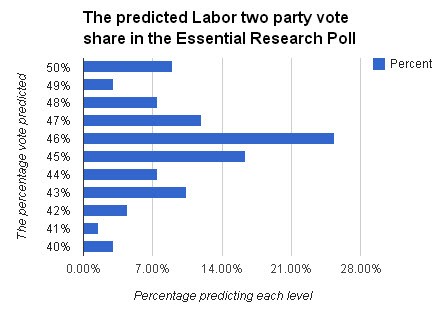 And we were in line with two of the other three polls published this week.

So where do results like that leave the parties with four months to go until voting day? Well Labor probably have to pick up five percentage points if it is to stagger over the line again, and that will not be an easy task.

My colleague Bernard Keane has a learned piece today on the influence of polling on outcomes and deals with things like margins of error. But the theoretical reliability of final polls — say, an error of 3 percentage points – does not help us this far out because so many unpredictable things can happen. What figure to apply to take these variables into account is difficult to determine because we are dealing with a limited historical record but call it four with Labor currently five points behind and the chances of a Coalition victory are around the 90% mark.

That, incidentally, is about where the Crikey Election Indicator based on betting market prices is this morning.

Time for a change. The Prime Minister and school children pictures are starting to lose their charm for the media. Yesterday’s Forrest Primary visit hardly featured at all other than on Julia Gillard’s own Twitter feed. And as for the first bloke visiting the V8s in the United States I admit to not knowing what they pictorial impact is. My guess is that in the western suburbs they might quite like the idea of a rev head prime ministerial partner in the Lodge.

How does toothpaste make orange juice taste bad? In the interests of you, dear reader, I tried it this morning — cleaned my teeth before drinking my orange juice. And I can report that it tasted quite foul. Thanks to the American Chemical Society’s award-winning Bytesize Science video series I now can bore you all with why. The video explains how a detergent called sodium lauryl sulfate, put into toothpaste to produce the foamy suds that gives it mouthfeel, nobbles thousands of the mouth’s taste receptors resulting in a rather bitter experience. Here endeth the science lesson for the day. The PM is mostly seen at schools with young children (adoring faces, beaming teachers) or with older groups of phone clutching squealing girls. Where are the boys schools?